A Uighur fashion model who filmed himself handcuffed to a bed in an epidemic prevention centre in Xinjiang was lawfully detained, Chinese officials have said. 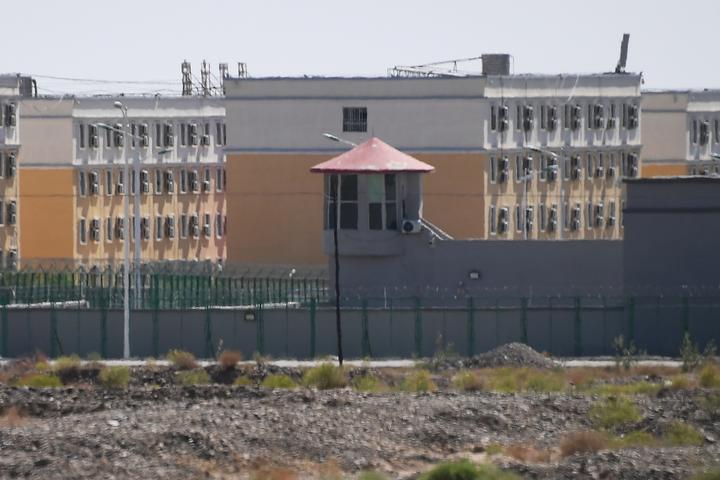 Merdan Ghappar sent video of himself, and a series of accompanying text messages, to his family in February. They were passed to the BBC and published earlier this month.

The messages offered a rare, detailed account from inside Xinjiang's highly secure and secretive detention system.

In his account, Ghappar described 18 days spent shackled and hooded with over 50 others in a jail. He said he was then isolated in an epidemic prevention centre, where he filmed the video.

Relatives say the 31-year-old was forcibly transported back to the far-western region of Xinjiang in January after completing a 16-month sentence for a drugs offence in the southern Chinese city of Foshan, where he'd been living and working.

Now, more than two weeks after the BBC sent a list of questions to Chinese authorities, a response has come in the form of a written statement by the Xinjiang government press office.

"According to article 37 of the Prison Law of the People's Republic of China, the people's government shall help released prisoners to resettle," it says.

"During the transfer, Merdan Ghappar committed acts of self-harm and excessive acts against the police."

It continues: "They took legal measures to stop him, and lifted those measures once his mood had stabilised."

Although Ghappar had spent years in Foshan, near Macao - where friends and relatives say he made good money modelling clothes - he was taken back to his city of birth of Kucha, on the opposite side of China, in Xinjiang.

The BBC showed the Chinese government statement to Merdan Ghappar's uncle, Abdulhakim Ghappar, who now lives in the Netherlands after leaving Xinjiang in 2011.

"If the police wanted to arrange help to get him resettled for work or something, they should have helped him in Foshan because he is working there, he has a house there," he told me.

"So, he shouldn't have been sent back to Kucha by force." 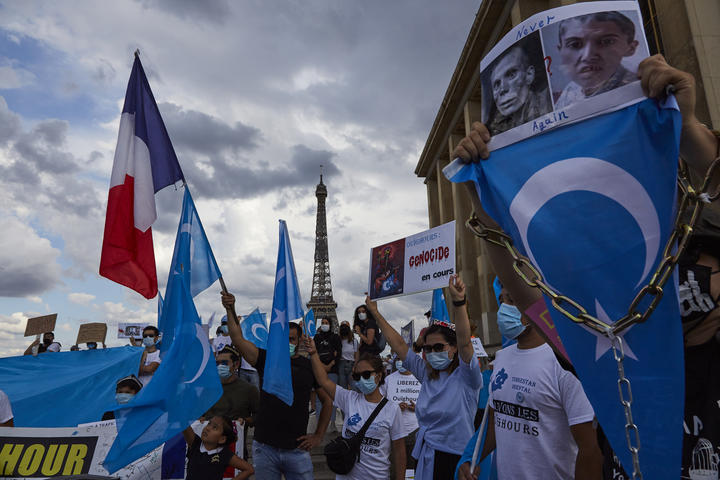 Members of the Uighur community and sympathizers demonstrate against China in Paris, France, on 16 August. Photo: AFP

In addition, Abdulhakim said, no mention of "resettlement" was made to the family when Ghappar was taken away in January.

The BBC has been shown evidence that the authorities were saying instead that "he may need to do a few days of education at his local community".

The family believe that "education" is a clear euphemism for the network of highly secure re-education camps where more than one million mostly Muslim Uighurs have been detained in recent years - and which China insists are voluntary schools for anti-extremism training.

Thousands of children have been separated from their parents and, recent research shows, women have been forcibly subjected to methods of birth control.

The government statement does not address Ghappar's allegations of mistreatment which, along with the shackling and hooding, included hearing sounds of torture from elsewhere in the police jail.

"One time I heard a man screaming from morning until evening," he wrote in one of his text messages.

Nor does the statement refer to his self-shot video showing him sitting in silence in the epidemic control centre, with dirty clothes and his left wrist clearly handcuffed to the bed.

Instead, it lists a range of behaviours, from violence to self-harm, implying that his treatment was proportionate and lawful.

"He resisted epidemic prevention staff when they tried to take his temperature, verbally insulted them and beat them up," the statement says.

"As these behaviours placed him under suspicion of committing a crime, the police have subjected him to forcible measures." His case "remains in process", it adds.

James Millward from Georgetown University, an expert on China's policies in Xinjiang, provided a translation and analysis of Ghappar's text messages alongside the original BBC article.

"It's interesting that nothing in the Xinjiang government's response addresses the description of conditions in the Kucha local police station; the overcrowding, the beatings, the unsanitary conditions, the sharing of eight sets of eating utensils by 50-60 people," he told me.

"Regardless of why Merdan was put in detention in Kucha, his description of those conditions, especially during the pandemic, are very disturbing."

Darren Byler is an anthropologist at the University of Colorado, Boulder, who has written and researched extensively about the Uighurs. 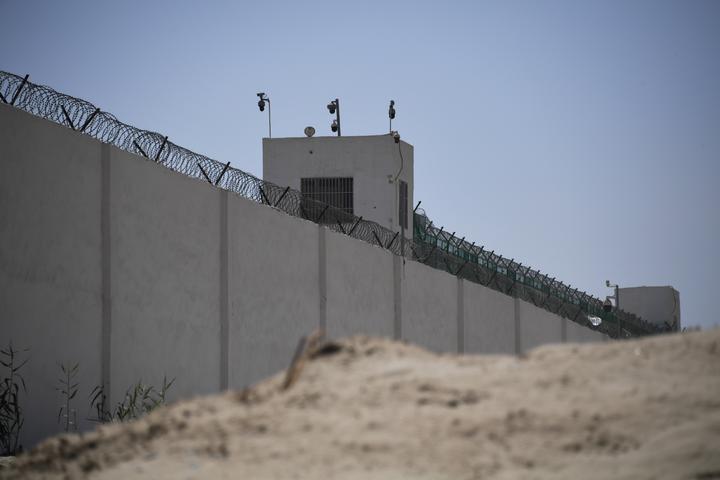 The outer wall of a complex on the outskirts of Hotan, believed to be a re-education camp where mostly Muslim ethnic minorities are detained, in Xinjiang province. Photo: AFP

"This message from the Chinese state authorities reflects the type of victim blaming that is often used by the police when caught using excessive force," he said after being shown a copy of the statement.

"Since the re-education campaign began in 2017, detainees have not been permitted to protest their internment. Instead they're required to maintain a 'good attitude' and admit their guilt under threat of beating and torture."

The Chinese government statement also makes no mention of how Merdan Ghappar was able to send out the video of himself handcuffed to the bed, along with his description of a detention system that China works hard to keep secret.

Family members have previously told the BBC that, unknown to his guards, he was able to retrieve his phone when reunited with some of his personal belongings in the epidemic prevention centre.

The 4 minutes 38 seconds of footage is the last the family have seen of him.

"The Chinese police have a long history of abusing restraints as a means of torture," Senior China Researcher at Human Rights Watch, Maya Wang, said.

"They have also been persecuting Xinjiang's Muslims," she added. "Taken together, I don't think the authorities' explanation concerning Merdan Ghappar is convincing. If the Chinese government has nothing to hide, it should give independent observers, including UN experts, unfettered access to Xinjiang."

The statement leaves a number of the BBC's questions unanswered - was Ghappar, as alleged, kept shackled with a sack on his head? Has his uncle Abdulhakim - who believes he is wanted in China as a result of what he says is his peaceful activism - been charged with any offence?

For the family though it is at least, they say, the first official notification they have received confirming that Ghappar is being detained.

After a few brief days of communication, the text messages fell silent in early March, just as suddenly as they had begun.

"I know him very well," Abdulhakim told me. "I don't believe he harmed himself, I think China harmed him and now I think they want to find an excuse for what they did to him.

"Please show me he is alive and well, otherwise I won't believe a word of this statement."