US president Donald Trump has cited New Zealand as having a big surge in coronavirus cases, but New Zealand politicians say there is no comparison with the cases in the States.

"They beat it they beat, it was like front page [news] they beat it because they wanted to show me something.

"The problem is [there is a] big surge in New Zealand, you know it's terrible - we don't want that.

"But this is an invisible enemy, that should have never been let to come to this country, to Europe to the rest of the world by China, just remember it." 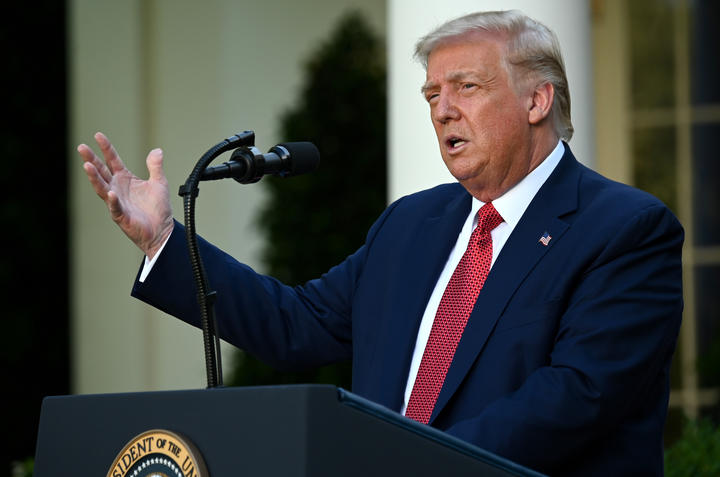 US President Donald Trump delivers a press conference in the Rose Garden of the White House in Washington, DC, on July 14, 2020. Photo: AFP / Jim Watson

Meanwhile, the US reported more than 42,000 new cases yesterday.

Labour leader Jacinda Ardern said there was no comparison between the thousands of cases daily in the United States and New Zealand's current cluster.

"Obviously, every country is experiencing its own fight with Covid-19, it is a tricky virus but not one where I would compare New Zealand's current status to the United States.

"I'm not concerned about people misinterpreting our status."

"We know by now to take everything that Donald Trump says with an enormous grain of salt," Shaw said.

New Zealand First leader Winston Peters was also on par with those reactions.

"The American people can work out that what we have for a whole day, they have every 22 seconds of the day, that speaks for itself."

"I'm not worried about calling out anyone, the fact is I'm here representing what my my country thinks and the main focus of my country's health priority. So reacting to what somebody on the other side of the world says is not what we do," Peters said.

Her deputy Gerry Brownlee said Trump's remarks would "not be particularly damaging" to New Zealand.

"I don't think too many of our trading partners would be moved by anything he might say ... [Trump's comments] are what they are."

Washington correspondent Simon Marks said Trump almost appeared to be implying that New Zealand had deliberately tried to control the virus in a bid to show him up.

In similar remarks Trump has previously referred to an increase in cases in Germany, Marks said.