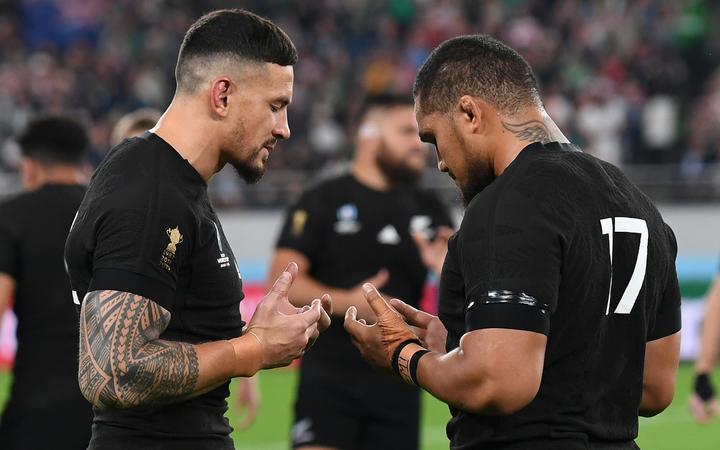 Sonny Bill Williams and Ofa Tuungafasi take a moment to pray after the All Blacks quarter final win over Ireland. Photo: Photosport

The 34-year-old Williams, who left New Zealand rugby after the World Cup in Japan and to join Canadian-based British Super League club Toronto Wolfpack, converted to Islam in 2009.

He has used social media in the past to speak out on several social issues, including racism and equality, and suggested on Monday that greater pressure should be placed by countries on China for its treatment of the Uighurs.

"Its a sad time when we choose economic benefits over humanity #Uyghurs," Williams wrote on Twitter, using an alternative spelling. The tweet included an image depicting Chinese oppression against the group. The post had received more than 9,000 likes and almost 6,000 retweets by Monday evening.

Ozil created a firestorm of controversy last week when he made a series of posts on his social media accounts condemning the treatment of Uighurs.

Ozil's posts called Uighurs "warriors who resist persecution" and criticised both China's crackdown and the silence of Muslims in response.

The posts led to China's state broadcaster CCTV refusing to televise Arsenal's match with Manchester City, while the former Germany international midfielder was removed from a Chinese video game.

China's foreign ministry said Ozil was "deceived by fake news" as social media platforms in the country such as Weibo were flooded with angry messages.

The United Nations and human rights groups estimate that between 1 million and 2 million people, mostly ethnic Uighur Muslims, have been detained in harsh conditions in Xinjiang as part of what Beijing calls an anti-terrorism campaign.

China has repeatedly denied any mistreatment of Uighurs.