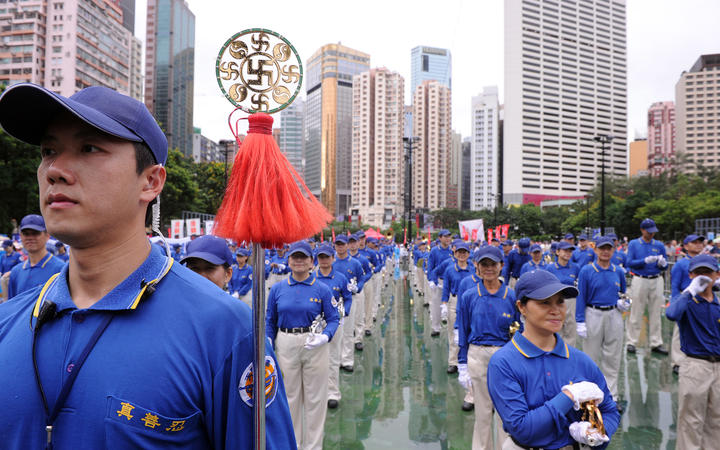 The spiritual group was banned in mainland China in 1999 but its members have been allowed to practice in Hong Kong freely, even though the group urges people to renounce the ruling Chinese Communist Party. Yang said she no longer feels safe in the city after the security law made the broadly defined crimes of secession, subversion, terrorism and collusion with foreign forces punishable by up to life in prison.

"In the mainland, my heart always trembled when I practiced Falun Gong. I constantly feared for my life," said Yang, who fled mainland China in 2009.

"Just like the mainland public security authorities, they can trample on the law and say anything is illegal," she said, talking about the new security law.

The Hong Kong government declined to comment on how the new law would impact Falun Gong, but said the law preserves "the basic rights and freedom lawfully enjoyed by law-abiding citizens." The law makes no mention of religious or spiritual groups.

Falun Gong was founded in mainland China in 1992, combining meditation, slow-motion exercises, moral teachings broadly based on Buddhism and Taoism and leader Li Hongzhi's sometimes unorthodox theories, such as his belief that aliens have started to take over the world.

The Chinese Communist Party saw the group's growing popularity as a challenge to its rule and banned it after 10,000 practitioners silently protested in Beijing, calling it an "evil cult" that threatened national stability, and imprisoned some of its members. "Of course we're worried," said Sarah Liang, a journalist for The Epoch Times, a newspaper started by Falun Gong members that is heavily critical of the Chinese Communist Party and supports US President Donald Trump. "But we're different from other groups in that we've already suffered 20 years of persecution."

Ingrid Wu, spokeswoman for the Hong Kong Association of Falun Dafa, an alternative name for the group, said two members have already left Hong Kong because of fears for their safety. She identified one of those people only as Susan, and asked that the other not be named.

"It is a hanging knife over our heads," Wu said.

Even though the new security law makes no specific mention of religious or spiritual groups, Maya Wang, senior China researcher at Human Rights Watch, described the law as wide and arbitrary. "Anyone who is critical of the Chinese government can be construed as having violated the law," she said.

Yang and six other of the 300 or so Falun Gong devotees who regularly practice in various places across Hong Kong told Reuters they planned to continue as they did before the law.

Whether they will be able to is seen by some as a litmus test of 'one country, two systems,' the principle China adopted when it took back control of Hong Kong in 1997, granting the territory a high degree of autonomy and religious and press freedoms not available on the mainland.

Some Falun Gong members said they had already made changes. At one publicity stall outside the Star Ferry terminal in Kowloon, Falun Gong used to prominently display a poster saying "Heaven will destroy the Communist Party". About two weeks after the new law, it was gone. Wu said that after the law was passed, some police officers asked volunteers to take down such banners, and that some members had agreed to take them down temporarily.

Hong Kong police declined to comment on Falun Gong and said it did not track national security complaints against specific groups. Reuters could not independently verify that the police were behind the removal of any banners.

"Who knows when they'll call us illegal," said Wincy Chan, who operated the stall.

Although largely left in peace by the Hong Kong government, Chan and her fellow members have for years faced opposition from certain pro-Beijing groups based in the city.

Next to her stall at the Star Ferry, an organization called Care for The Youth Group Association Hong Kong has a stall manned by two volunteers sporting neon vests with "Exterminate evil cult Falun Gong" emblazoned on them in red.

One of them, Paul Chan, a 52-year-old former civil servant, said he distributed pamphlets for personal reasons.

"My relatives in the mainland believed in Falun Gong, and fell under some sort of influence. They wanted to kill themselves, harm themselves," said Chan, who did not name his relatives.

"They're not a religion. What they're saying about healing powers is entirely false."

Chan's organisation declined requests for comment. Reuters could not determine whether the group has made any complaints about Falun Gong to the police.

Joanna Lau, a Falun Gong practitioner who organizes street stalls, said only a few members have stopped volunteering. Still, she said one member, whom she identified only as Ms Li, had replaced a banner in the Causeway Bay district accusing the Chinese Communist Party of harvesting organs of Falun Gong members, a claim Beijing has denied, to one promoting meditation.

"I think they will spare no effort in trying to stop our activities," said Yang. "I don't know if we will still be able to continue."

Despite those fears, some play down the potential threat. The Hong Kong government has so far "simply ignored" Falun Gong, said Lau Siu-kai, vice president of the Chinese Association of Hong Kong and Macau Studies, Beijing's top think-tank on affairs in those territories.

"If they concentrate on the qigong (breathing exercise) aspect, or the religious aspect of Falun Gong and abstain from challenging Beijing or attacking the reputation of national leaders, I think the government might have less incentive or less legal reason to deal with them," he said.

Last week, US Secretary of State Mike Pompeo called on Beijing to stop its mistreatment of Falun Gong members on the 21st anniversary of the crackdown.