First Person - China's wide-ranging new security law for Hong Kong was passed this week putting the city at a precarious juncture more than two decades on from the 1997 handover. I look back at my time as a reporter in Hong Kong which culminated in the night the British flag was lowered for the final time. 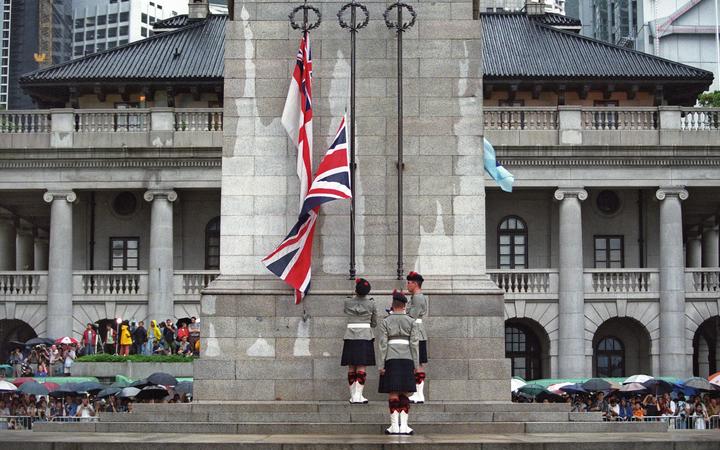 Three British soldiers lower the Union Jack for the last time at the Cenotaph monument in the Central district of Hong Kong on 30 June 1997, just hours prior to the end of some 156 years of British colonial rule as the territory returned to Chinese control. Photo: AFP

It poured with rain the day Britain handed Hong Kong back to China.

Some took it as an ominous sign for the British colony, including my colleague, a Hong Konger, working with me on the handover story.

"God is crying for Hong Kong," she told me as we made our way to the studios before the ceremony.

In the lead up to 30 June 1997, I sensed an atmosphere of fatalism in the territory. People were used to the deadline hanging over the place after a century and a half of British rule.

There had been a belated and largely failed attempt to bring more democracy to Hong Kong and the city's 6.5 million people were prepared for the worst and hoping for the best.

Hong Kong was to be a Special Administrative Region of China, but the big question was would Beijing stick to the 50-year plan of "one country, two systems"?

It had been a long and tetchy run-up. In 1982, at the start of negotiations over Hong Kong's future, the then British Prime Minister Margaret Thatcher tumbled down the steps of the Great Hall of the People in Beijing. Her fall was seen as the harbinger of trouble to come.

During the 10 years before the handover, as a reporter with local broadcasters RTHK and ATV, I came to admire those of my colleagues charged with reporting the tedious discussion and sometimes incomprehensible drafting of Hong Kong's mini constitution - the Basic Law.

I was more interested to find out how the transfer of power would affect ordinary Hong Kong people.

There were plenty of stories to cover: Hong Kongers' rush to secure an overseas passport and a safe-haven before 1997, growing concerns around media freedom, the brain drain, manifestations of Chinese nationalism, the influx of migrants from China and stories about the winding down of camps housing thousands of Vietnamese boat people who had fled their own country.

There were stories also around the frenzy to get rich and quirky end-of-empire tales such as what would happen to the red British post boxes with their royal insignia.

My favourite assignment was a day out with the last British military unit to depart Hong Kong. Hovering in a scout helicopter around the towering Bank of China building in Central is still etched in my mind.

I'd also begun preparing for the change myself, learning Mandarin after realising my kitchen Cantonese, picked up as a child in Hong Kong, would only get me so far.

I'd arrived with my family in the territory in the late 1960s. At that time, China-watching journalists like my father - a correspondent for Reuters - were based in Hong Kong watching the Cultural Revolution unfold over the border. There had just been riots in the territory, fomented by "leftists" egged on by China against British rule.

I remember hearing the zealous announcements from Chinese state radio emanating from the receiving station attached to the old house we lived in on Hong Kong island. For we children, Communist China was a curiosity and we would take visitors to a hilltop just inside the Hong Kong China border to watch through binoculars people going about their daily life on communist soil. 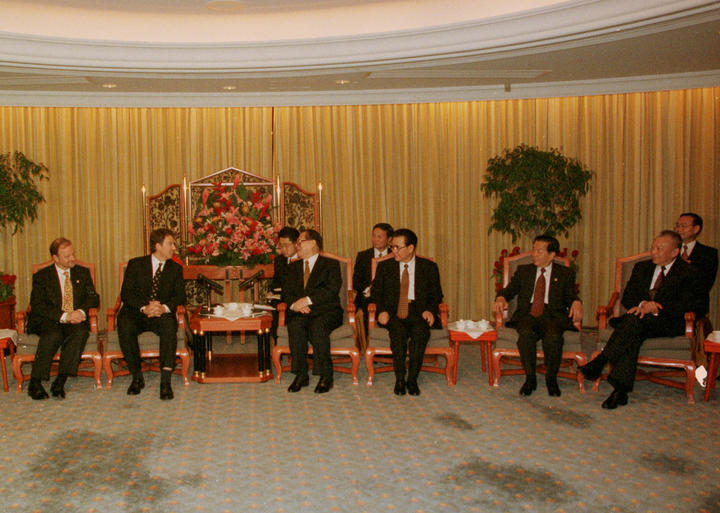 Hong Kong's population was exploding in the 60s and 70s as refugees from China flooded into the territory, many swimming across a dangerous bay, filled with sharks - so legend had it - hoping for freedom and fortune.

Now the day had arrived when Hong Kong would be handed back. Things had changed in the intervening years as China had opened up its economy.

"It doesn't matter whether a cat is black or white, as long as it catches mice," China's late paramount leader Deng Xiao Ping had intoned.

But I still felt for my local friends and colleagues parcelled up like a present from one colonial master to another.

Five thousand journalists from around the world had arrived to cover the handover ceremonies. We were corralled into a large theatre complex a few hundred metres away from the main action. The rooftop had sweeping views over the central city, its buildings festively neon-lit with leaping dragons.

The famous American anchor Dan Rather had a special booth set up with air conditioning while the rest of us sweated it out in 30-plus degree heat and teaming rain.

Hong Kong's last governor, Chris Patten, had never worn the traditional plumed hat and crisp whites of his predecessors. Tonight he was in a sombre dark suit. Tony Blair had just become Britain's new prime minister and he was, together with Prince Charles, alongside.

China's top leaders, including then President Jiang Zemin, who'd all moved on from the Mao jacket, were also there.

Chinese soldiers goose-stepped as they brought in the PRC flag. For a moment the British and Chinese flags fluttered together in a fake wind in the huge convention centre built for the ceremony. The Union flag was lowered for one last time.

"Now Hong Kong people are to run Hong Kong. That is the promise and that is the unshakeable destiny," Patten had earlier declared, looking pointedly into a sea of blue and yellow umbrellas, given out as part of the celebratory Handover merchandise.

There was plenty of symbolism for the cameras - soldiers from the People's Liberation Army trundling over the border in trucks, waving with white-gloved hands, Patten bowing his head to the sorrowful notes of Elgar's Nimrod at a separate British ceremony. The sheeting rain had left him drenched. Was that a tear or a drip of rain on the end of his nose?

Patten and his entourage pulled out of the harbour for one last time on the Royal Yacht Britannia and expats leered up large in expensive flats on The Peak, making merry, perhaps, before the shutters came down.

The non-stop rain was regarded as a good omen as well, cleansing the territory of British imperialism, according to at least one of the territory's pro-China figures.

I left soon after the handover, worried more about fresh air for my children, than any impending sense of doom.

On several trips back to the place I regard as my second home, I have seen how Hong Kong has managed to survive, if not flourish, despite its many setbacks.

But barely half way through the half century of "one country, two systems" promised for Hong Kong, China now has new powers under a wide-ranging national security law and that makes me very worried.