Brazil's coronavirus outbreak has been one of the world's most severe, with more than two million cases recorded since March. 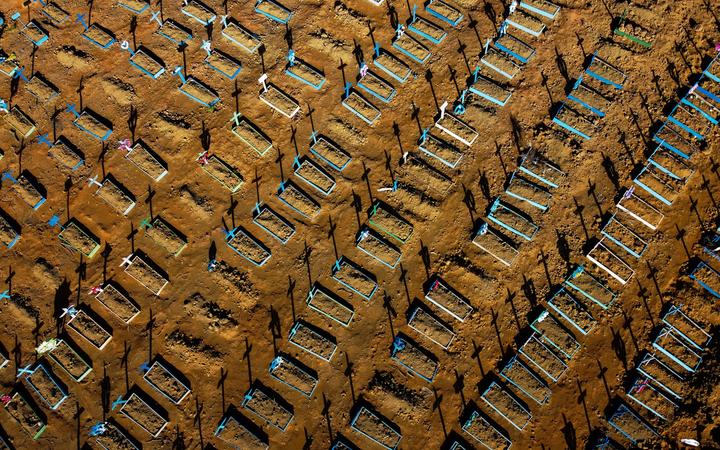 The official total reached 2,012,151 on Thursday, according to Health Ministry figures.

In fact, it is the second worst affected country behind the US. More than 74,000 people have died with the virus there and, owing to a lack of testing, the true figures are believed to be even higher.

The outbreak took some time to reach Brazil and it was the Amazonas region which was badly hit by the first wave of cases.

In the state capital Manaus, a man can be seen arranging coffins at a funeral parlour. 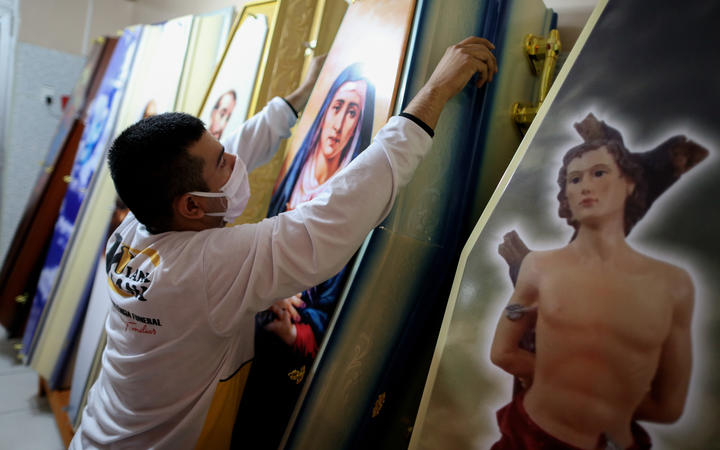 An employee at Viana Funeral services arranges coffins in Manaus, Brazil, where the City Hall earlier warned that stock of coffins in the region is likely to run out. Photo: AFP / Michael Dantas

Officials warned that the stock of coffins in the region was likely to run out. They were forced to dig large burial sites as deaths spiked, and poverty and malnutrition made tackling the virus in the heart of the Amazon rainforest a major challenge.

Indigenous communities have been among the worst affected by the virus and Manaus is home to a large proportion of them.

Many of their homes are situated far away from health facilities. On the outskirts of the city, nurse Vanderlecia Ortega dos Santos, responded to the crisis by volunteering to care for her indigenous community of 700 families.

In the image below, Witoto indigenous nursing assistant Vanda Ortega, 32, can be seen starting her round of healthcare visits in the Parque das Tribos, an indigenous community in the suburbs of Manaus. 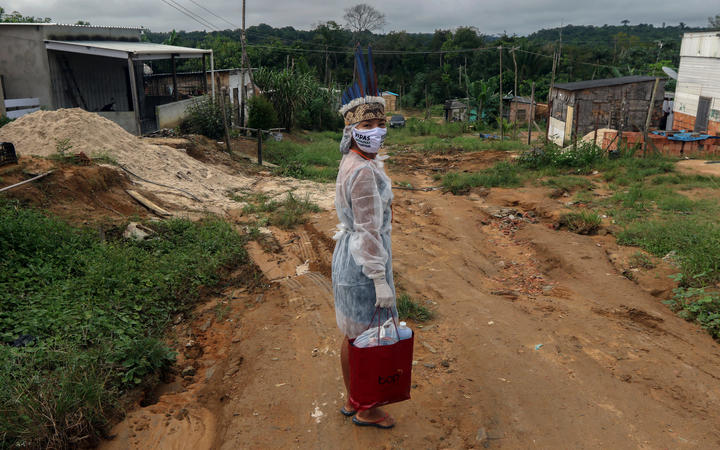 But it was not long before the virus spread to major cities such as Rio de Janeiro and São Paulo. Cases then began to rise sharply.

In May, São Paulo's mayor warned that its underfunded health system was on the verge of collapse as it became a new hotspot for Covid-19. He said demand for hospital beds had skyrocketed.

A hospital was built inside a sports gym in the city as one of many makeshift facilities that opened up.

But despite the rise in cases there was still no national lockdown. States and cities adopted their own measures, but these were met by protests and data later showed that compliance lessened as time went on.

Stay-at-home orders and other restrictions were criticised by far-right President Jair Bolsonaro, who denounced them as "dictatorial". He even joined anti-lockdown protests in the capital, Brasilia. 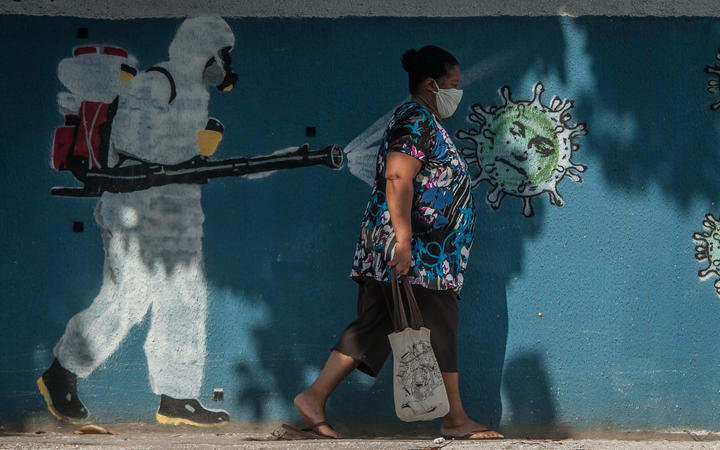 A woman walks past graffiti in Rio de Janeiro depicting a man performing a disinfection and the face of President Jair Bolsonaro represented by a virus. Photo: Allan Carvalho/NurPhoto

Bolsonaro has repeatedly played down the risks of what he calls "little flu" and his response to the pandemic has been heavily criticised.

He has argued that regional lockdowns are having a more damaging effect than the virus itself, and accused the media of spreading panic and paranoia.

The president has also been spotted meeting supporters while not wearing a mask.

And while many people share his concerns about the economic impact of lockdowns, health officials have disagreed with his approach. In fact, two doctors have left their posts as health minister since the pandemic began, one was sacked, one resigned. 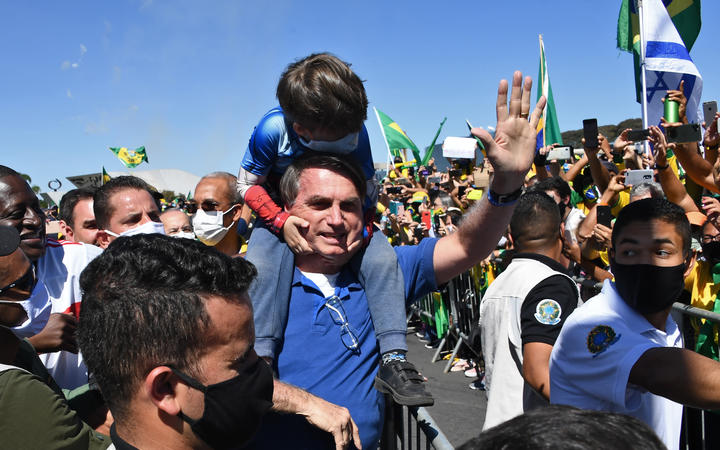 Brazilian President Jair Bolsonaro carries the son of a supporter on his shoulders as he greets supporters during a demonstration in Brasilia, during the Covid-19 coronavirus pandemic on May 31, 2020. Photo: AFP / Evaristo Sa

Bolsonaro also said he would not be seriously affected by the virus. "I'm not going to be brought down by a little flu," he said in March. That's been put to the test, as earlier this month he tested positive for Covid-19.

The president met the US ambassador Todd Chapman the day before he said he started to feel symptoms. The pair were seen shaking hands, and Chapman later went into quarantine.

On 20 June, Brazil became only the second country to pass one million cases and that number has continued to rise steadily. Experts say it is likely much higher due to a lack of testing.

But lockdowns were lifted even as cases surged. In Rio and São Paulo, restaurants and bars were reopened despite the continued increase in transmissions. 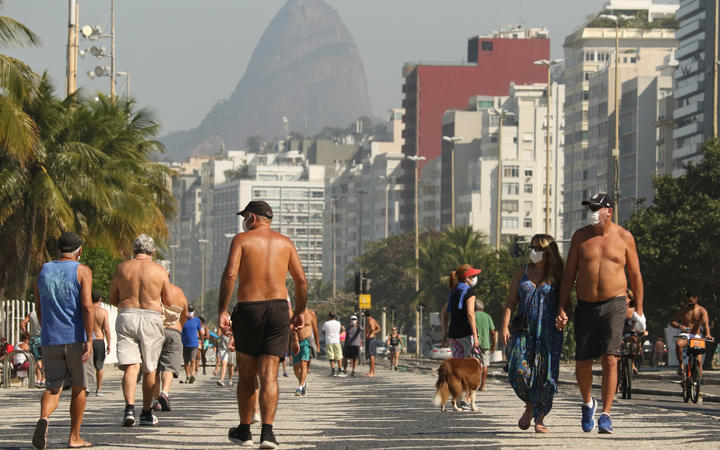 The rise in cases and the relaxation of lockdown measures left some Brazilians feeling as though they needed to take matters into their own hands.

And one couple took extreme measures to keep safe.

A chronic lung disease means that accountant Tercio Galdino, 66, is at high risk from Covid-19. He and his wife wear special outfits when out and about in Rio de Janeiro. And, as an added bonus, the outfit lets him celebrate his love of space. 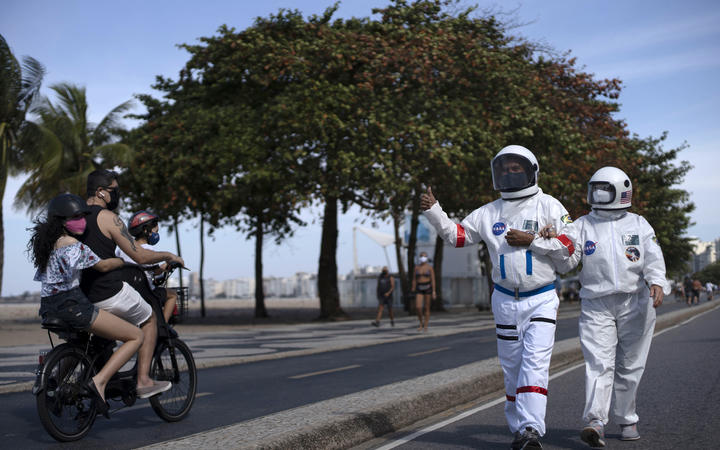 Brazilian accountant Tercio Galdino, 66, gives the thumb up to people riding a motorcycle as he and his wife Alicea Galdino walk along Leme beach in protective suits, in Rio de Janeiro, Brazil on July 12, 2020. Photo: AFP / Mauro Pimentel

There is some hope, however, two major vaccine tests, in partnership with the pharmaceutical companies AstraZeneca and Sinovac, will soon begin final phase testing on thousands of Brazilian volunteers.

The hope is that a breakthrough on this front could help Brazil reverse its worrying rise in cases and deaths. 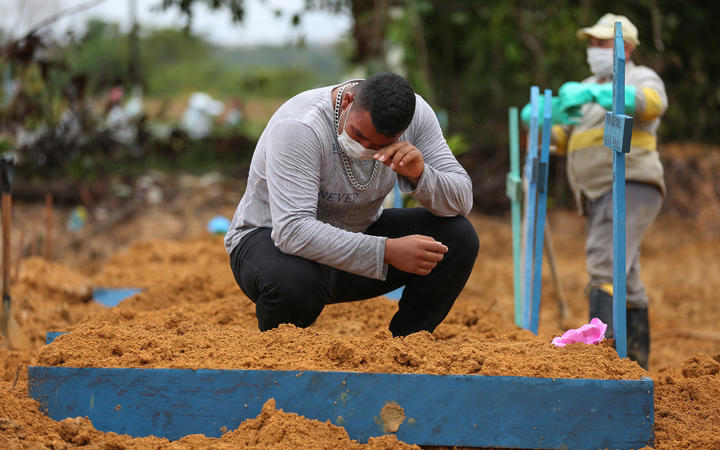 Vito Soares mourns his grandmother, Enedina Soares ,71, a victim of Covid-19 coronavirus at the Nossa Senhora cemetery in Manaus, Brazil, on May 6, 2020. Photo: AFP / Michael Dantas