The mayor of Brazil's largest city, São Paulo, says its health system could collapse as demand grows for emergency beds to deal with coronavirus cases. 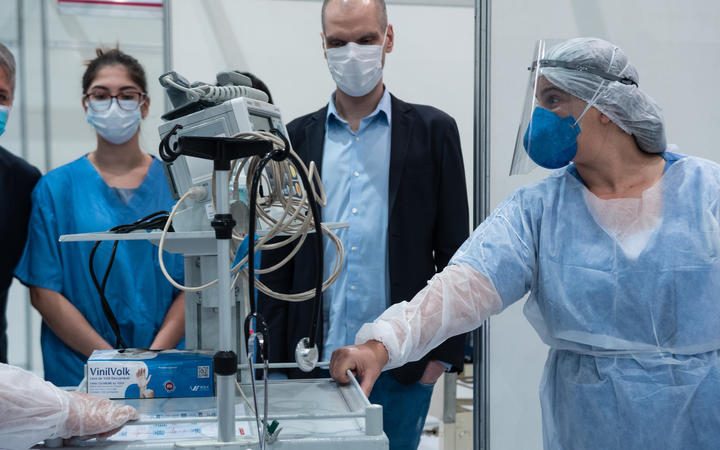 Mayor Bruno Covas watches a demonstration on Covid-19 treatment at a field hospital set up in a gymnasium in São Paulo. Photo: Ettore Chiereguini/AGIF/ AFP

Bruno Covas said the city's public hospitals had reached 90 percent and could run out of space in about two weeks.

São Paulo is one of the country's worst-hit regions, with almost 3000 deaths so far.

Brazil, by far the largest country in Latin America, has for several weeks been at the centre of the coronavirus outbreak.

Latin America and the Caribbean have recorded more than 500,000 infections, with Brazil accounting for nearly half of those.

On Saturday, Brazil overtook Spain and Italy to become the nation with the fourth largest number of infections.

The health ministry reported 7938 new cases in the past 24 hours, taking the total above 241,000. Only the US, Russia and the UK have higher numbers.

The death toll in the Latin American nation over 24 hours was 485, meaning that the total number of deaths is 16,118 - the world's fifth-highest figure.

Health experts in Brazil have warned that the real number of confirmed infections in the country may be far higher than the official records, due to a lack of testing.

Brazil's far-right president Jair Bolsonaro has been strongly criticised both at home and abroad for his handling of the country's escalating Covid-19 crisis.

He defied global health advice for distancing rules on Sunday when he posed for photographs with supporters and children in the capital, Brasília.

What did São Paulo's mayor say?

Covas said he was now in crisis talks with the state governor over introducing a strict lockdown to try to slow the contagion before hospitals were overwhelmed.

The governor of São Paulo state controls the police, and his support will be essential if a lockdown is to succeed.

São Paulo has a population of about 12 million, and official figures show the majority of residents have been flouting social distancing rules.

A quarantine in São Paulo state was imposed nearly two months ago - businesses, schools and public spaces were closed and people were asked to stay at home.

There are no costly punishments for those who flout the rules however, with plenty of Paulistanos (residents of São Paulo city) still choosing to drive to the beach for the weekend.

A recent rule brought in that made the wearing of masks mandatory was also often ignored.

How is President Bolsonaro handling the crisis?

The far-right president is popular in São Paulo, and has argued repeatedly that distancing will only wreck the economy. 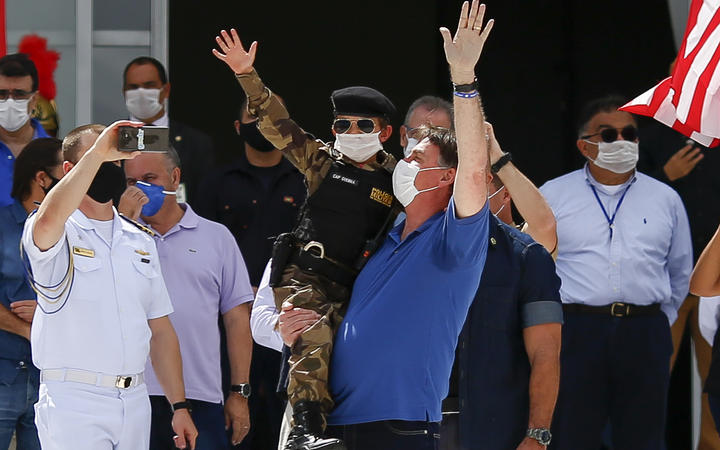 Brazilian President Jair Bolsonaro holds a child in a military costume during a rally in Brasilia on 17 May, amid the pandemic. Photo: AFP

Bolsonaro continues to oppose lockdown measures. He has downplayed the virus as "a little flu" and has said the spread of Covid-19 is inevitable.

In April, Bolsonaro joined protesters demanding that lockdown restrictions be lifted. He said the restrictions were damaging the country's economy, bringing unemployment and hunger.

Last week, Brazilian Health Minister Nelson Teich resigned after less than a month in the job.

He had publicly criticised a decree by Bolsonaro allowing gyms and beauty parlours to reopen. Teich's predecessor was also sacked after disagreeing with Bolsonaro.

What about health experts' reaction?

Health experts in Brazil have warned the real number of confirmed infections in the country may be far higher than the official records, due to a lack of testing.

"Brazil is only testing people who end up in the hospital," Domingo Alves from the University of São Paulo Medical School told AFP news agency last week. 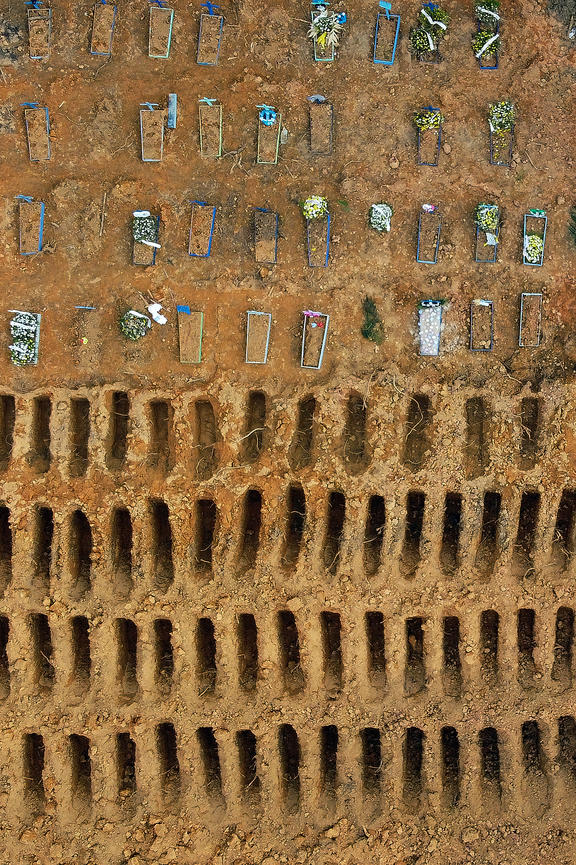 Freshly dug graves for Covid-19 victims in a cemetery in the Amazon forest in Brazil. Photo: AFP

"It's hard to know what's really happening based on the available data. We don't have a real policy to manage the outbreak," he said.

Alves is one of the authors of a study that estimated the real number of infections was 15 times higher than the official figure.

Elsewhere in Latin America, Mexico has recently seen a spike in new infections, while Ecuador saw its health system collapse in April.

The sharp rise in cases in Latin America has led the World Health Organization (WHO) to say the Americas are currently at the centre of the pandemic.

In March, the WHO had labelled Europe the "epicentre of the pandemic" but the region is now slowly beginning to ease restrictions brought in to slow the spread of the virus.