Brazil's health minister has resigned after less than a month in the job following disagreements over of the government's handling of the country's escalating coronavirus crisis. 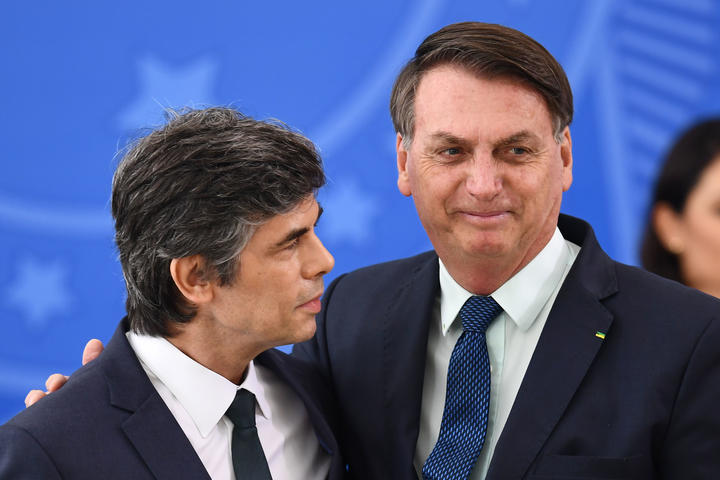 Nelson Teich, left, and Brazilian President Jair Bolsonaro during his swearing-in ceremony less than a month ago Photo: AFP or licensors

However, he gave no reason for his resignation at a press conference.

His predecessor was sacked after disagreeing with Bolsonaro.

He has downplayed the virus as "a little flu" and has said the spread of Covid-19 is inevitable, attracting global criticism.

Brazil has recently surged past Germany and France in terms of its coronavirus caseload, becoming one of the world's hotspots with more than 200,000 cases. The latest daily figures on Thursday showed 844 new deaths recorded, bringing the official death toll to just shy of 14,000.

Why did the minister resign?

At his news conference, Teich did not reveal why he had stepped down. He just thanked President Bolsonaro for giving him the chance to serve as a minister and praised healthcare workers.

But he has clashed with the president over several aspects of how the government has dealt with the spiralling epidemic.

He disagreed with the president's desire to widely use chloroquine as a treatment. The drug has gained widespread attention although the World Health Organisation (WHO) says there's no definitive evidence it works.

Teich also butted heads with the president over plans to open up the economy, saying last week that he was not consulted ahead of an order that paved the way for gyms, beauty salons and hairdressers to reopen.

But disagreements over how chloroquine should be used was the final straw, the Globo newspaper reported.

He is second health minister to leave the post in under a month. Luiz Henrique Mandetta was fired in April after President Bolsonaro publicly criticised him for urging people to observe social distancing and stay indoors.