A judge in Brazil has ordered President Jair Bolsonaro to wear a protective mask when he is in public spaces in the capital, Brasilia, and the surrounding federal district. 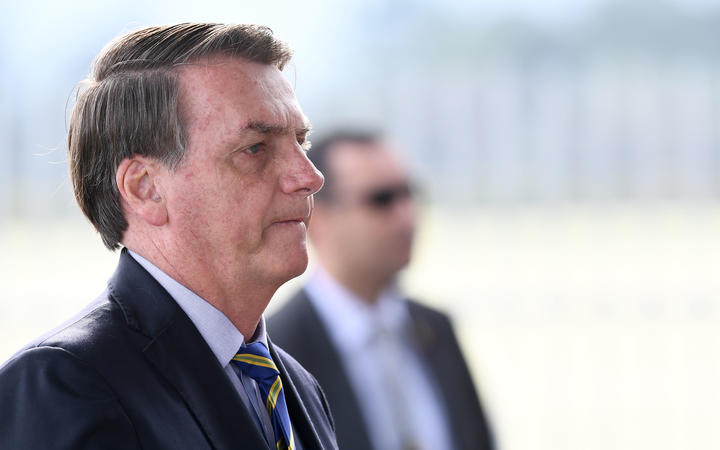 The far-right president has been criticised for belittling the risk posed by coronavirus.

He dismissed it as "a little cold" at the start of the pandemic.

Brazil has the second-highest number of coronavirus cases and Covid-related fatalities in the world after the US.

There are more than 1.1m confirmed cases of coronavirus in Brazil and more than 51,000 coronavirus-related deaths have been recorded, according to a tally by Johns Hopkins University.

Despite these high figures, President Bolsonaro has repeatedly appeared in public without a mask while greeting his supporters.

At one rally, he was filmed coughing without covering his mouth and on another occasion he was seen sneezing into his hand and shaking the hand of an elderly woman immediately afterwards.

The requirement to wear masks in the federal district came into force on 30 April.

The rule was brought in by the governor of the federal district, Ibaneis Rocha, and requires people to cover their nose and mouth in all public spaces, including public transport, shops and commercial and industrial premises.

On 11 May, the rule was further tightened with those flaunting it facing fines of 2000 reais ($US387) per day.

Federal Judge Renato Borelli's ruling means Mr Bolsonaro is not exempt and that the president and any other public officials who do not comply with the requirement will also incur the 2000-reais fine.

President Bolsonaro has argued from the start of the pandemic that measures taken to curb the spread of the virus could be more damaging than the pandemic itself.

On Monday, he renewed his call for the easing of lockdown measures and the reopening of shops and businesses.

He said that the way the pandemic had been handled had "maybe been a bit over the top".

The president's insistence that the economy should be prioritised has been deeply divisive and he has clashed with state governors who have introduced restrictions of movement and requirements to wear masks in public.