Covid-19 cases around the world increased by a record 183,020 in the latest 24-hour period, the World Health Organisation says. 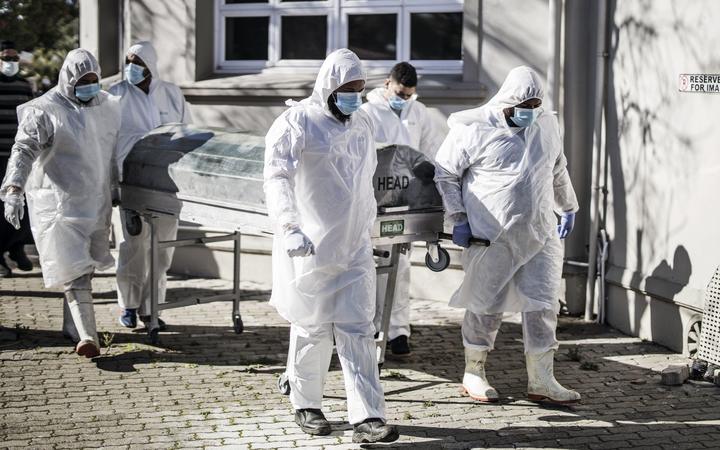 Undertakers carry a coffin during a funeral for a Covid-19 coronavirus victim at a mosque in Cape Town, South Africa. Photo: AFP

The biggest increase was from North and South America with over 116,000 new cases, according to a daily report. Total global cases are over 8.7 million with more than 461,000 deaths, according to the WHO.

Brazil, the world's No 2 coronavirus hotspot after the United States, officially passed 50,000 coronavirus deaths in a blow for a country already grappling with more than one million cases, rising political instability and a crippled economy.

Experts say the true numbers are a lot higher because of a lack of widespread testing. Latin America's largest country has typically recorded more than 1000 deaths a day, but usually registers fewer on the weekends.

Brazil passed one million cases on Saturday. Since first arriving in the country, the virus' rapid spread has eroded support for right-wing President Jair Bolsonaro and has raised fears of economic collapse after years of weak growth. 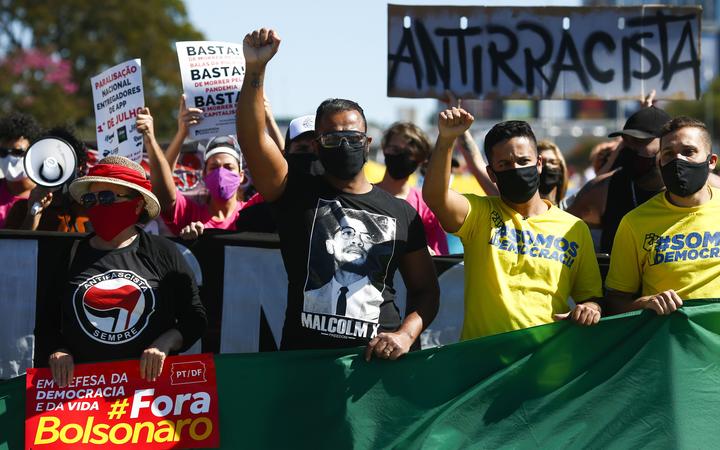 Anti-government protesters march in Brasilia, in a country where 50,000 people have died from the coronavirus. Photo: AFP

Bolsonaro, sometimes called the "Tropical Trump", has been widely criticised for his handling of the crisis. The country still has no permanent health minister after losing two since April, following clashes with the president.

In his latest statement on the pandemic, Bolsonaro said the military serves the will of the people and its mission is to defend democracy, adding fuel to a raging debate about the armed forces' role amid rumbling fears of political fragility.

His comments came on the same day his supporters and detractors gathered in cities across the country, in a stark symbol of the polarisation in Latin America's largest country.

Germany's coronavirus reproduction rate has jumped to 2.88, up from 1.79 a day earlier, health authorities said, a rate showing infections are rising above the level needed to contain the disease over the longer term.

The rise brings with it the possibility of renewed restrictions on activity in Europe's largest economy - a blow to a country that so far had widely been seen as successful in curbing the coronavirus spread and keeping the death toll relatively low.

To keep the pandemic under control, Germany needs the reproduction rate to drop below one. The rate of 2.88, published by the Robert Koch Institute (RKI) for public health, means that out of 100 people who contract the virus, a further 288 people will get infected.

Already, the country is grappling to get people to adhere to isolation rules. Over the weekend, authorities in Goettingen needed riot police to enforce quarantine measures in a tower block where 120 people have been found to be infected with Covid-19.

Covid-19 outbreaks in recent weeks have occurred in nursing homes, hospitals, institutions for asylum seekers and refugees, in meat processing plants and logistics companies, among seasonal harvest workers and in connection with religious events, RKI said. 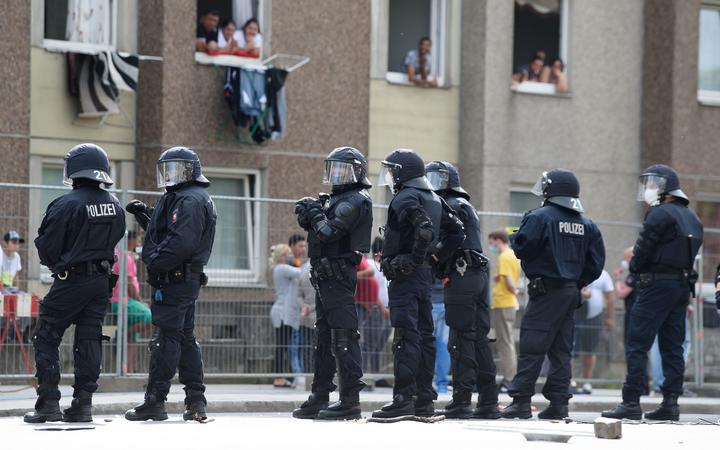 Unrest in the Netherlands

Police in The Hague said they detained some 400 people today after demonstrators refused to leave a protest against the Dutch government's social-distancing measures put in place to halt the spread of the coronavirus.

Several thousand protesters had gathered in the Malieveld area in The Hague, close to the Dutch seat of government, even though the rally had been banned by the municipality.

Protesters were wearing T-shirts that read: "Stop the lockdown" and carried banners demanding that the Dutch rule to keep a distance of 1.5 metres from one another be lifted.

The Hague Mayor, Johan Remkes, said the demonstration was banned because authorities had information that "troublemakers" from all over the Netherlands, including groups of known football hooligans, were planning to descend on The Hague.

Prime Minister Boris Johnson will unveil the latest easing of Britain's coronavirus lockdown tomorrow when he will also announce the conclusion of a review into whether a two-metre rule on social distancing should be relaxed, his office said.

Britain's economy has been hammered by the lockdown to stop the spread of Covid-19 and although non-essential retailers were allowed to reopen last Monday, many businesses, particularly in the hospitality and leisure sectors, have remained closed.

Some lawmakers in Johnson's party have been vocal in calling for him to drop the two-metre rule saying it was having a devastating impact on the economy which shrank by a quarter over March and April. But the government has been cautious, saying it did not want to risk a second spike in novel coronavirus cases.

Johnson's office said the prime minister would tell parliament which sectors would be allowed to reopen on 4 July under the government's roadmap out of the lockdown.

The Sunday Telegraph reported that Johnson would also announce a change to the social distancing guidelines so people would only need to remain one metre apart providing they took additional measures such as wearing a mask.

The Bulgarian, 29, withdrew from the second tournament in Zadar, Croatia, yesterday with sickness after his opening loss to Borna Coric.

Today's final, which would have featured world No 1 Djokovic, has been cancelled.

Dimitrov, who also played in the first event in Belgrade last week, wrote on Instagram: "I tested positive back in Monaco for Covid-19. I want to make sure anyone who has been in contact with me during these past days gets tested and takes the necessary precautions."

The tournaments were set up by Djokovic to help players get back to match fitness after several weeks without competition because of the coronavirus pandemic. Several top-10 players have been competing including Djokovic, Alexander Zverev and Dominic Thiem.

The first event in Serbia attracted 4000 fans, and several thousand attended in Zadar. 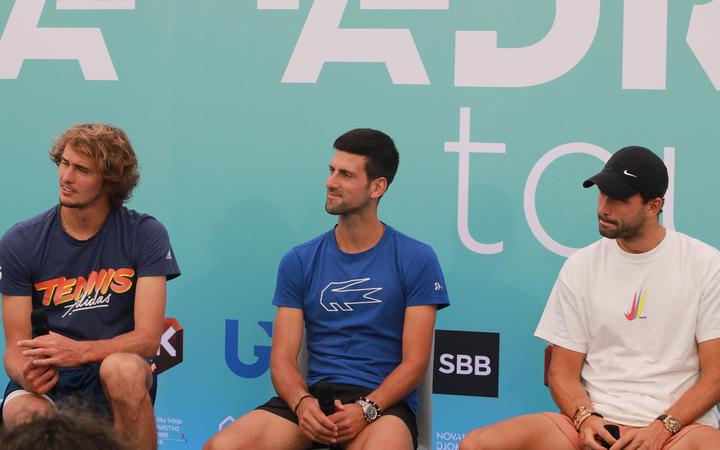