China's capital cancelled scores of flights, shut schools and blocked off some neighbourhoods as it ramped up efforts to contain a coronavirus outbreak. 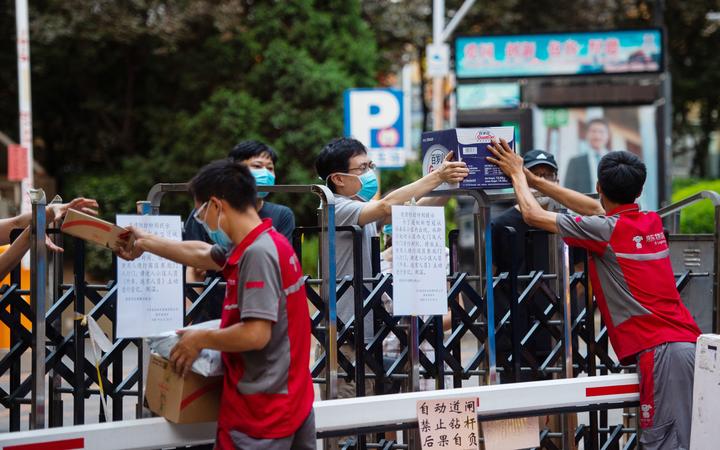 Delivery workers pass packages over a fence to residents in Xicheng District of Beijing on 17 June 2020, after a new Covid-19 outbreak. Photo: AFP / Xinhua News Agency

Many in Beijing have had their daily lives upended by the resurgence of the disease over the past six days, with some fearing the entire city is headed for a lockdown as new cases rise.

Health officials reported 31 new infections for 16 June, taking cumulative cases since Thursday to 137 in the city's worst resurgence in four months, with 356,000 people tested since Sunday.

The Xinfadi market to which the new outbreak has been traced was the capital's largest trading centre for farm produce, with high levels of product traffic and clusters of people, said Pang Xinghuo, a senior disease control official.

"The risk of the outbreak spreading is huge and controlling it is difficult," she told a news conference. "(We) can't rule out the possibility the number of cases will persist for a period of time."

Although roads and highways in Beijing were still open and companies and factories had not been told to halt work, authorities stepped up movement control measures on Wednesday.

About 60 percent of scheduled flights at the Beijing Capital International Airport had been cancelled or were likely to be by 1000 GMT, aviation data tracker Variflight showed, as were about half the flights at Daxing, the city's other major airport.

Most of the affected flights were domestic.

All outbound taxi and car-hailing services and some long-distance bus routes were cancelled on Tuesday, when officials put the city back on a level two alert, the second-highest in a four-tier virus emergency response system.

That reversed a downgrade to level two from level three just 10 days earlier.

Kindergartens, primary schools and high schools shut across Beijing, as did some bars, restaurants and night clubs.

Beijing designated 32 neighbourhoods as medium-risk areas as of Wednesday, with entrants undergoing temperature checks and registration. An area near the massive wholesale food centre where the outbreak began was marked high-risk, and its residents quarantined.

Residents in medium and high-risk neighbourhoods were forbidden to leave Beijing. People in other neighbourhoods looking to do so need to show proof of having tested negative.

"What I'm worried about is whether there will be a level one response like it was before, making it impossible for people to work," said a 23-year-old media worker surnamed Wang.

China imposed strict bans on movement this year in the city of Wuhan, where the virus was first detected at a seafood market in December, before spreading worldwide to infect more than 8 million people.

Beijing's Xinfadi wholesale food centre is far larger than the Wuhan market, however.

Outside Beijing, the provinces of Hebei, Liaoning, Sichuan and Zhejiang have reported new cases linked to Xinfadi.

Many provinces worried about contagion have imposed quarantine requirements on visitors from Beijing, as well as Macau.

In Beijing, police guarded roadblocks at compounds near Xinfadi while delivery staff on bikes and in vans queued to hand food and other supplies to residents.

"When they shut the market, it was a surprise," said Wei, 32, visiting with her boyfriend to deliver food and medicine to her mother, who lives in a compound where a virus case was confirmed.

"Many people heard and left the compounds, but my mother is old and cannot leave easily."