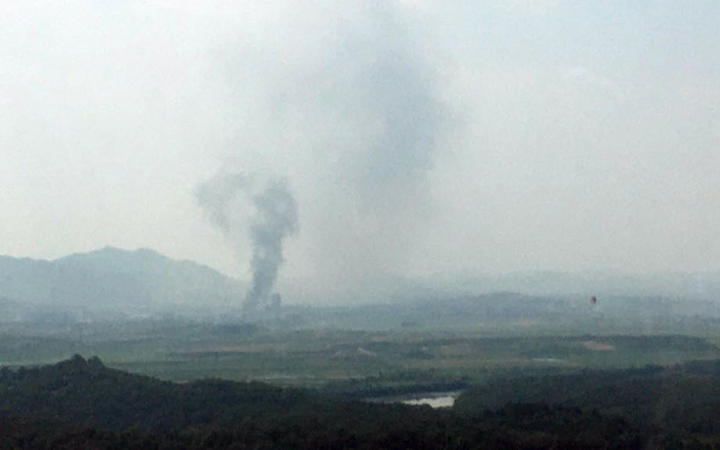 Smoke rises from North Korea's Kaesong Industrial Complex where an inter-korean liaison office was set up in 2018, as seen from South Korea's border city of Paju on June 16, 2020. Photo: STR / Yonhap / AFP

The announcements made by state media agency KCNA came a day after North Korea blew up a joint liaison office set up in a border town as part of a 2018 peace agreement between the two countries' leaders.

They could also complicate efforts by US President Donald Trump, already grappling with the coronavirus pandemic and anti-racism protests, to persuade Pyongyang to abandon its nuclear and missile programmes.

"The solution to the present crisis between the North and the South caused by the incompetence and irresponsibility of the South Korean authorities is impossible and it can be terminated only when proper price is paid," KCNA said.

North Korea's Rodong Sinmun, the ruling Workers' Party's official newspaper, published photos showing the liaison office before and after its demolition, alongside a series of KCNA articles and commentaries criticising South Korea. 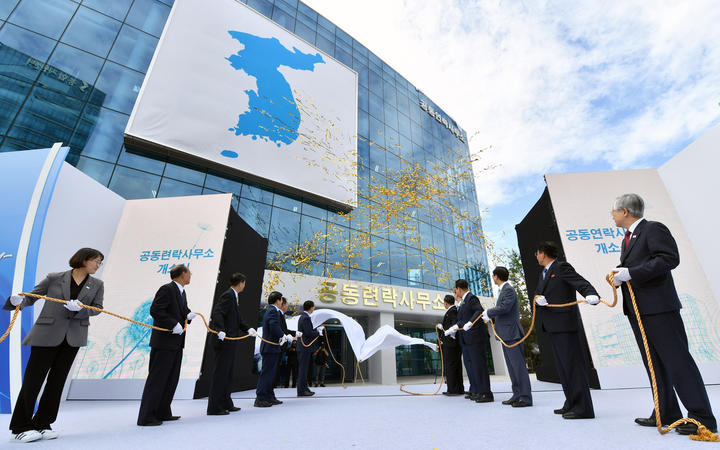 "Ominous prelude to total catastrophe of North-South relations," one of the articles was headlined, referring to the office's destruction.

Kim Yo Jong also harshly criticised Moon in another KCNA statement, saying he had failed to implement any of the 2018 pacts and "put his neck into the noose of pro-US flunkeyism".

South Korea's presidential Blue House said the criticism of Moon was rude and senseless, and damaged the trust built by the leaders of the two Koreas.

"We will no longer accept such unreasonable behaviour," Blue House spokesman Yoon Do-han said at a briefing, without elaborating.

Moon offered to play a mediator role between Trump and Kim Jong Un as they pulled back from trading threats and insults in 2017, leading to a series of meetings in 2018 and 2019 that were high on symbolism but which failed to achieve a breakthrough on denuclearisation.

In Monday's speech, which marked the 20th anniversary of the first inter-Korean summit, Moon expressed regret that North Korea-US and inter-Korean relations have not made progress as hoped but asked Pyongyang to maintain peace deals and return to dialogue.

"In the eyes of the Kims, Moon's administration gave too much of false hope that it would defy US pressure to move their relations forward," said Chun Yung-woo, a former South Korean nuclear envoy.

"But after two years, what they have left is a failed summit with Trump and no progress whatsoever on inter-Korean economic cooperation."

In a separate KCNA dispatch on Wednesday, a spokesman for the General Staff of the (North) Korean People's Army (KPA) said it would dispatch troops to Mount Kumgang and Kaesong near the border, where the two Koreas had carried out joint economic projects in the past.

The KPA spokesman also said police posts that had been withdrawn from the heavily fortified Demilitarized Zone (DMZ) will be reinstalled, while artillery units near the western sea border, where defectors frequently send propaganda leaflets, will be reinforced.

The North will also restart sending anti-Seoul leaflets across the border, he added.

Seoul's defence ministry has urged North Korea to abide by a 2018 inter-Korean military pact, under which both sides vowed to cease "all hostile acts" and dismantled a number of structures along the DMZ.

Jang Kum Chol, director of North Korea's United Front Department in charge of cross-border affairs, said the North will never have talks or exchanges in the future with South Korean authorities "who evoke only disgust and nasty feelings".

"It is our stand that we had better regard everything that happened between the North and the South as an empty dream," he said, according to KCNA.