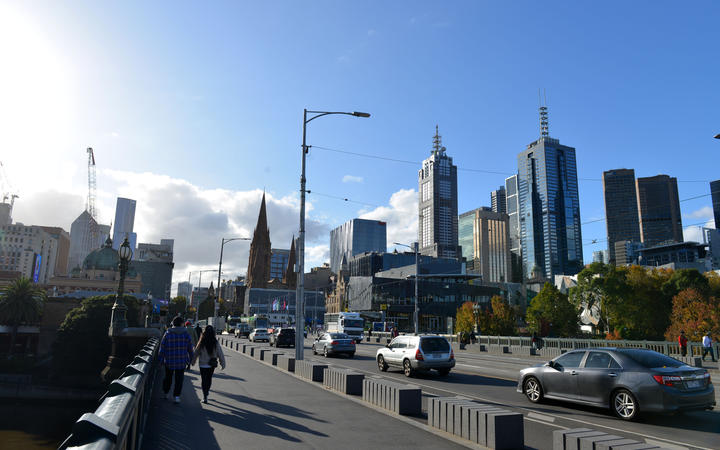 Premier Daniel Andrews said 11 of the new cases were under investigation and there would be "significant community transmission" among the new cases.

One of the new cases was from a person in hotel quarantine, two were from known outbreaks and three were from routine testing.

Moreland and Brimbank are two of six local government hotspots, along with Hume, Darebin, Casey an Cardinia, where there has been high community transmission of the virus in recent weeks.

Dr van Diemen also said despite Essendon player Conor McKenna tackling more than one player over the weekend, only one player had been determined to be a close contact because "reasonably prolonged" contact with people - such as 15 minutes of face-to-face contact within 1.5 metres - was needed to transmit the virus.

Dr van Diemen said there was no "indication at this point" that McKenna's test was a false positive.

Andrews said he had been in contact with AFL boss Gillon McLachlan about the positive test at Essendon.

"This is a challenging time for the AFL but he's really clear... his team are working incredibly closely with the public health team," he said.

Andrews said the pandemic was "not over" and implored people to maintain physical distancing, to not shake hands or greet others with hugs and kisses.

"If you're sick you can't go out. If you even have just mild symptoms, you have to come forward and get tested and if you're asked to quarantine you need to do as you are asked," he said.

"If people don't do the right thing... and spend a modest amount of time with others, it is almost certain they will give the virus to other people."

Last weekend, Andrews said large family gatherings had been the catalyst for the virus taking off again in some areas.

"We have seen many families, large families, that have gathered in numbers beyond the rules," he said.

"That is just not on.

"I know and understand that all Victorians want this to be over but we simply can't pretend the virus is gone."

Andrews reminded people that new restrictions were now in place which limited the number of guests people could have in their homes.

Andrews said he believed there were "larger numbers of Victorians who perhaps think this is a new phase and can do things a little differently".

He said if just a few people did the wrong thing, localised or state-wide restrictions may need to be re-introduced.

"Yesterday we got 363 so people are, I think, doing the right thing, and making sure we're aware where there may be breaches."

She said police were only fining people who had not complied with requirements to self-isolate.

One person was fined yesterday and 12 cases were being followed up, she said.

"Police are following that up and particularly targeting the six [hotspots]."

An 'army' of people doorknocking in Melbourne hotspots

Andrews said "very deep engagement with multicultural communities" began on Monday to make sure everyone in the six hotspots knew about the current health advice.

"There is literally an army of people going out and doorknocking ... in hotspots, suburbs and other areas if that's deemed appropriate."

Health Minister Jenny Mikakos said testing sites at five shopping centres would have their operating hours extended to deal with the huge demand for testing.

One thing that may be taken to another level is the notion of localised testing and testing really significant numbers of people in those hotspot suburbs, he said.

"You would always prefer to do symptomatic testing rather than asymptomatic testing but we wouldn't rule that out. And I'd be really confident if we took it to another level people in these communities would come forward and get tested."

Dr van Diemen said she understood it had been a "really difficult year" but pleaded with parents to limit the number of social gatherings their children had over the upcoming school holidays.

"Please have a think about whether you need to have social events every day," she said.

Dr van Diemen said health authorities were noticing a "significant increase" in the number of people infected people were coming into contact with.

She said if people did not minimise social contacts it would "really increase the opportunity for this virus to spread".

"This is an extremely contagious virus, it spreads like a cold. It's winter, you know how quickly colds spread in winter - that is what we are trying to stop here."

"I think it's really important for us to remember numbers are going up in many places around the world.

"We are somewhat in a bubble here. We are really lucky but this hasn't gone away."