Australia's second most populous state Victoria has extended its state of emergency for four more weeks to 19 July, as it battles a spike in coronavirus infections with a pick-up in community transmission. 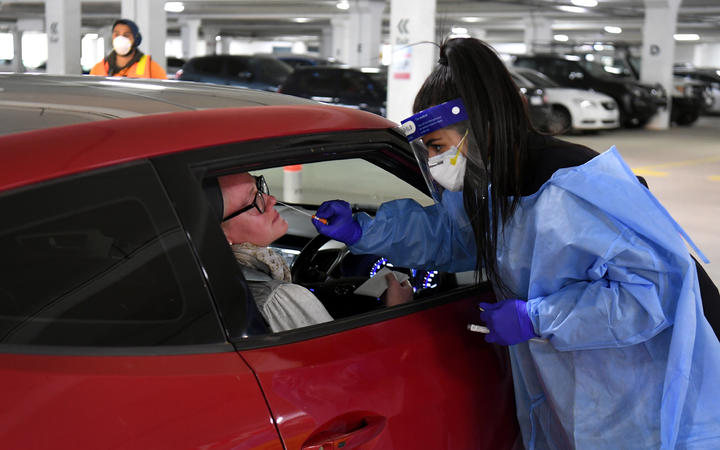 Medical staff perform a Covid-19 test at a drive-through testing site in a Melbourne carpark on 1 May. Photo: AFP

The move came a day after the state announced it would reimpose restrictions capping visitors to households to five people and outdoor gatherings to 10, starting Monday. The limits had been relaxed on 1 June to allow up to 20 people in households and public gatherings.

Victoria reported 19 new infections on Sunday, the fifth day of double digit-rises. The state has now had 1836 total confirmed cases, or a quarter of the cases in Australia, since the Covid-19 pandemic erupted.

Sunday's tally in Victoria included an Australia Rules football player, the first in the league to test positive, whose team and coaching staff have been told to isolate.

The surge in Victoria has alarmed other states, which have had only a few, if any, new cases for several weeks. Western Australia, which shut its borders in April, said it would weigh Victoria's situation in determining when to reopen its borders.

There has been some confusion regarding when Australia and New Zealand might be likely to establish a trans-Tasman travel bubble.

Last week, Australian Tourism Minister Simon Birmingham said his country's border would most likely be locked down until 2021. However, on Friday New Zealand's Foreign Affairs Minister Winston Peters told Morning Report that he had heard from Australian Prime Minister Scott Morrison that borders for trans-Tasman travel would open by July or August. "You've got a bit of a mixed message there," Peters said.

Australian health officials, however, still see no need to require use of face masks, as they would have limited value in a country where absolute numbers of community transmission remain "very low", deputy chief medical officer Nick Coatsworth said.

Victorian state health minister Jenny Mikakos said 210 of the state's cases are believed tied to community transmission, partly blaming families who have had parties, lunches and dinners attended by people with mild symptoms since restrictions were eased on 1 June.

"We obviously have been concerned by the increasing numbers that we have seen in recent days. It is still a very serious situation," Mikakos said at a televised media conference in Melbourne.

State police said they planned to step up enforcement efforts, especially in suburbs where there have been breakouts and patrolling ski resorts and camper-van parks during the upcoming school holidays.

Individuals caught breaching restrictions face fines of up to $A1652 for individuals and $A9913 for businesses.

"This is not the time to be complacent," Victoria's police minister, Lisa Neville, told reporters.

The Australian Industry Group, which represents a wide range of employers, said Victoria's tightening of restrictions again, including extending working from home through to the end of July, would make it harder for businesses to reopen later.