George Floyd, the black man killed in police custody in the US, has become a rallying cry for equality and justice in some of the largest protests against racism since the 1960s. 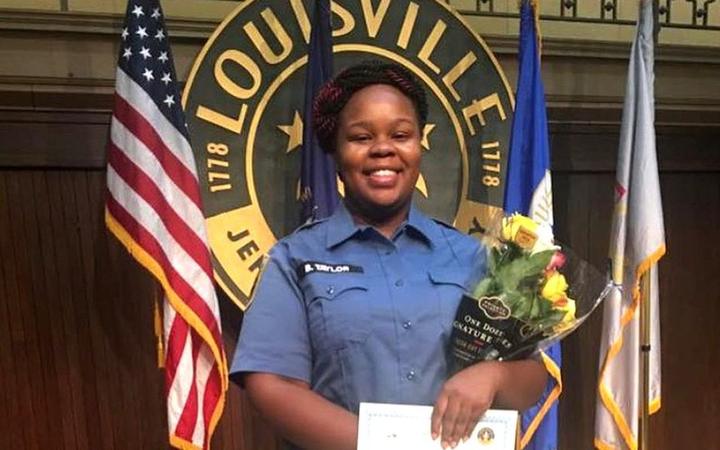 Protestors have chanted his name for 13 days and his face has been painted in murals from Syria to Belfast.

But other names too have been on the lips of protesters, in particular that of Breonna Taylor, a health worker shot eight times by police who entered her apartment in Louisville, Kentucky on 13 March.

Activists are calling on people to "Say Her Name" as part of a movement to remember black women who have not attracted the same attention as other cases.

On Friday, when Taylor would have turned 27, mourners gathered for a vigil in Louisville and people shared birthday messages on social media writing, "you should have been here to celebrate".

Yesterday, after three full days of work on #BirthdayForBreonna, I finally found some time to sit and write my birthday card for her. My family got involved and even my little cousin signed her name to her dad's card. This effort has ballooned into something I could never have imagined or hoped for. The work I put in and the work you all put in with me has been incredible to behold. So many of you sent beautiful cards and letters and postcards and you donated and you signed and you made this story big enough that I spent most of yesterday giving interviews. Seeing this project go so, immensely viral had given me a new hope that perhaps we can value black women, even though we shouldn't need so much prompting. I hope that with all the time and effort and money that so many hundreds of you put in, we can finally get #JusticeForBreonna. Happy birthday Breonna. You should have been here to celebrate #SayHerName : @aylasydney and @_afrodiziak

"It started off lonely, but it's so amazing to see so many people standing up for her, just saying her name," her mother Tamika Palmer, said at the vigil.

Taylor would have been out in the Black Lives Matter protests if she hadn't been killed, her mother added.

What happened to Breonna Taylor?

The events of the night Taylor died are disputed.

Breonna Taylor, an emergency medical technician, was at home in bed in Louisville when police officers entered her apartment shortly after midnight. She died after being shot eight times.

They raided her address using a battering ram when executing a search warrant as part of a drugs investigation. No drugs were found on the property.

Local media report that police were acting on a "no-knock" warrant, allowing them to enter the home without warning. Police say despite the warrant, they knocked before entering but Taylor's family and a neighbour have disputed this.

The police had the wrong address, a wrongful death lawsuit filed by her family claims.

Taylor was asleep and her boyfriend Kenneth Walker, who has a gun licence, grabbed his firearm, according to the suit.

Walker believed people were breaking in and he fired in self-defence, his lawyer said.

Walker called 911 and said that "somebody kicked in the door and shot my girlfriend," according to a recording released last week.

Louisville police said they returned fire after one officer was shot and wounded in the incident.

What is the status of the case?

It says the officers were not looking for Taylor or her partner - but for an unrelated suspect who was already in custody and did not live in the apartment complex.

The search warrant obtained by police included Taylor's house because authorities believed a suspect in a drug ring used her apartment to hide drugs, according to a CNN news affiliate.

A lawyer for Taylor's family, Ben Crump, described the incident as a "botched police raid".

An investigation into the circumstances of her death opened by the FBI on 21 May is ongoing, according to CNN.

Three officers have been placed on administrative leave, but no-one has been charged. 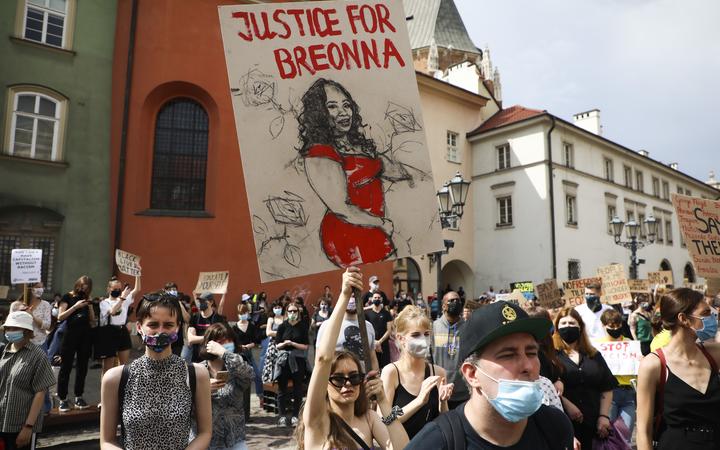 A sign picturing Breonna Taylor is displayed at a demonstration for George Floyd in Krakow. Photo: AFP

What has changed since her death?

The officers who entered Taylor's apartment were not wearing body cameras that could record the unfolding events.

And the Louisville police chief was removed from his post when it was discovered that officers present at the fatal shooting of a black man during a protest did not have their body cams turned on.

Why does her story resonate?

People expressing their sadness, horror and anger about racism in the US have been sharing pictures of Taylor on social media. More than five million people, including singer Janelle Monáe, have signed a petition calling for justice.

Many drew attention to stark statistics about the huge inequalities African-American women live with.

Black women are three times more likely than white women to die in pregnancy, according to the Centers for Disease Control.

They also experience significant pay disparity - in 2017 black women earned 61 cents for every dollar earned by white men, according to the Centre for American Progress.

As demands for racial equality continue, many want Breonna Taylor's name to be remembered.