Rising floodwaters unleashed by two dam failures have submerged parts of the central Michigan town of Midland, displacing thousands of residents and spreading into a Dow Chemical plant in the riverfront city. 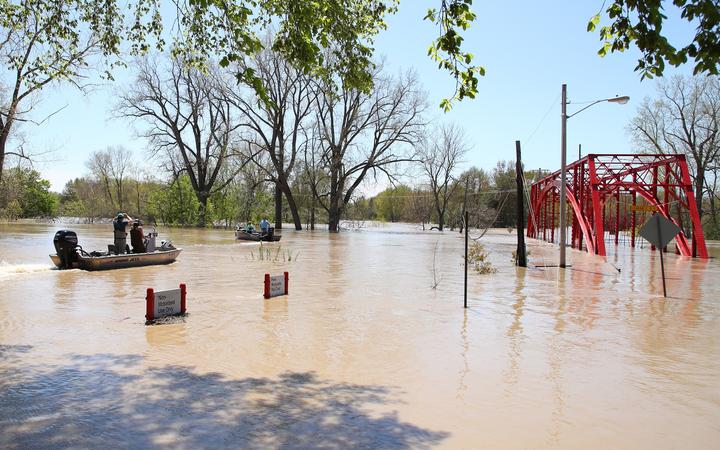 Residents in boats inspect the floodwaters flowing from the Tittabawassee River into the lower part of downtown in Midland, Michigan. Photo: AFP

By late morning, the company said, floodwaters were confirmed to be "co-mingling with on-site containment ponds" at the sprawling Dow plant, located just upstream from a Superfund hazardous waste cleanup site on the rain-swollen Tittabawassee River.

The National Weather Service (NWS) warned of "life-threatening" flooding as the Tittabawassee rose to historic levels.

Parts of Midland, a city of some 42,000 residents about 193km northwest of Detroit, were submerged under 1.5 metres of water before the river crested lower than expected.

Mark Bone, chairman of the Midland County Board of Commissioners, said no injuries had been reported. But the flood posed a major logistical challenge to authorities already coping with the coronavirus pandemic, and Governor Gretchen Whitmer called for federal assistance.

Some 10,000 people were evacuated throughout Midland County, Whitmer said, after days of heavy rain caused the Tittabawassee to overflow its banks and breach the Edenville and Sanford dams yesterday.

"Experts are describing this as a 500-year event," Whitmer told a news conference after a tour of the flood zone. She urged residents of low-lying areas to seek higher ground.

National Guard troops assisted in moving some evacuees out of harm's way. 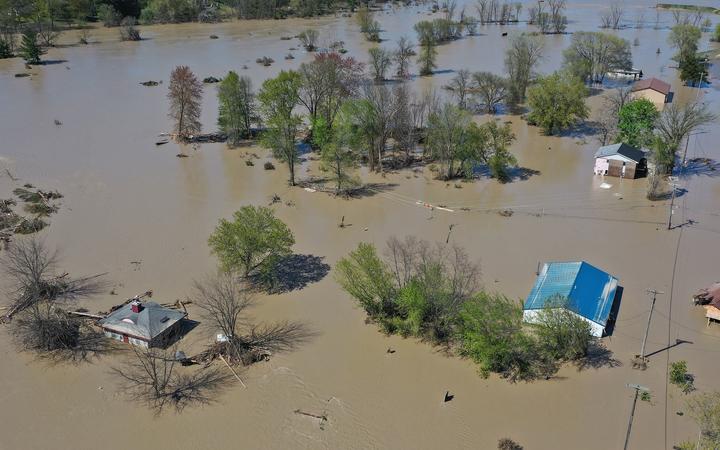 An aerial view of the Tittabawassee River after it breached a nearby dam in Sanford, Michigan. Photo: AFP

At an evacuation shelter inside Midland High School, about 3km from the riverfront, volunteers and evacuees wore face coverings to maintain social distancing recommended for curbing the spread of the coronavirus.

One evacuee, 101-year-old Dot Costello, who fled her apartment with friends, said she was doing "fine," but wished she "had a TV to watch the news." 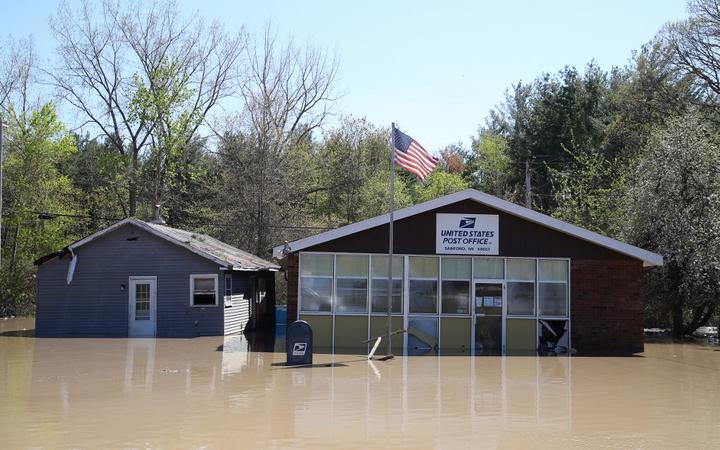 Part of the main street of Midland, Michigan. Photo: AFP

A spokeswoman for the Federal Energy Regulatory Commission said engineers would be sent to both dams to assist authorities in an investigation into the cause of the breaches. The agency in 2018 revoked the hydropower-generating licence for the Edenville structure, accusing its operators of various deficiencies.

Dow Chemical, which has its headquarters in Midland, said in a statement that all operating units, except for facilities needed for managing chemical containment, had been shut down.

The 770-hectare Dow facility sits just upstream from a site contaminated with highly toxic chemicals, including dioxins, spewed from the plant for decades during the manufacture of chlorine-based products, according to the United States Environmental Protection Agency.

A multi-year project to clean up the waste under the EPA's Superfund programme is likely to be completed next year, the agency said.

The EPA said in a statement its cleanup plan required Dow to conduct "post-flood assessment to determine if there is recontamination or if the constructed cleanup remedies have been damaged".

An EPA assessment following a major flood in 2017 found that "impacts to the Superfund site were minimal," and Dow completed "necessary, minor repairs as required".

Trump due to visit

President Donald Trump, scheduled to tour a Ford Motor Co auto plant in Michigan tomorrow, said on Twitter he had dispatched teams from the Federal Emergency Management Agency (FEMA) and the US military to the flood-stricken area to lend support.

Trump, who had encouraged protesters demanding that Whitmer ease coronavirus stay-at-home orders, tweeting a "LIBERATE MICHIGAN" message weeks ago, chided her again today, tweeting: "Governor must now 'set you free' to help. Will be with you soon!"