Protesters and police have clashed on the outskirts of the Chilean capital Santiago amid tension over food shortages during lockdown. 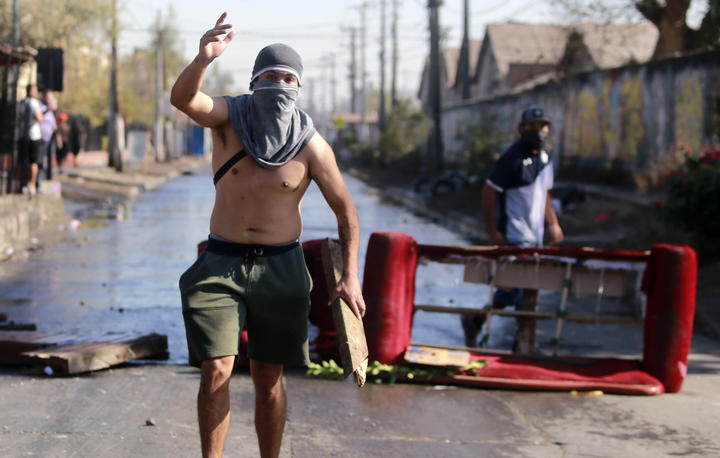 A demonstrator gestures during clashes with riot police within a protest against Chilean President Sebastian Pinera's government amid the Covid-19 pandemic. Photo: AFP

Local television showed police using tear gas and water cannon to quell unrest on the streets of El Bosque, where poverty is high.

President Sebastián Piñera, in a televised address after the protests, pledged to get food to those in need.

A recent surge in cases prompted the national capital to go under a strict and total lockdown this weekend.

Groups of protesters were seen throwing stones and setting fires in parts of the El Bosque neighbourhood.

In a statement, local officials said they had distributed about 2000 aid packages but warned the government they could not meet demand.

President Piñera later pledged his government would provide 2.5 million baskets of food and other essentials over the next week or so.

"We will prioritise the most vulnerable families," he said, describing the plan as "historic".

Following the announcement, Santiago Mayor Felipe Guevara tweeted to encourage residents to follow the rules and stay at home for their own safety.

"I understand the deep anguish of millions of Chileans, thousands are starving," he wrote, while also dismissing controversy over comments he made about the protests on television.

Chile has seen significant social unrest since October 2019 when protests first erupted over a planned increase to metro fares.

Growing anger over low wages, high costs of living and inequality sparked months of unrest, but protests have gradually subsided as Covid-19 spread.

President Piñera has already unveiled stimulus measures to try to ease the economic impact of the pandemic, but critics and opposition groups say his plans do not go far enough.