Police across Europe and the UK have struggled to enforce distancing guidelines as thousands protest against lockdown enforcement. 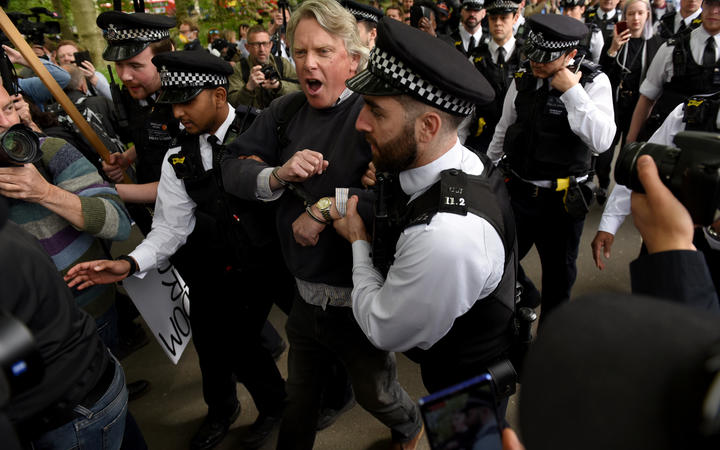 A man is arrested at a 'UK freedom movement' mass gathering in London Photo: AFP

Police in London arrested 19 people for deliberately breaking social distancing guidelines in protest against the rules, on the first weekend since Prime Minister Boris Johnson announced a slight loosening of England's lockdown.

The Metropolitan Police said that a group in central London's Hyde Park had been protesting about the government's response to the Covid-19 pandemic and had failed to comply with repeated requests to disperse.

"It was disappointing that a relatively small group in Hyde Park came together to protest the regulations in clear breach of the guidance, putting themselves and others at risk of infection," Laurence Taylor, Deputy Assistant Commissioner at the Metropolitan Police, said in a statement.

Hundreds of protesters gathered in Warsaw's Old Town in the early afternoon, carrying signs saying, "Work and bread" and "It will be normal again." 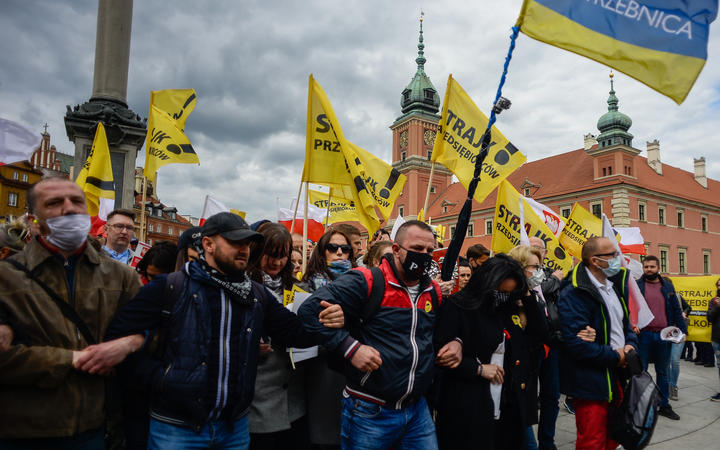 People wear protective face masks as they take part in a protest against the Coronavirus economic package at the Castle Square in Warsaw, Poland Photo: AFP

Poland has been steadily loosening coronavirus restrictions in recent weeks in an effort to cushion the economy. Hair salons and restaurants are expected to reopen with new safety measures in place on Monday.

But the protesters, who have gathered repeatedly in recent weeks, say restrictions need to be lifted further in order for them to sustain their livelihoods.

Police blocked the planned march, saying in a statement published on Twitter that public gatherings are still banned under the government restrictions.

"Unfortunately we are dealing with cases of aggression towards police. Due to the attacks on civil servants, we used methods of direct confrontation such as physical force and [tear] gas," the Warsaw police said in a tweet.

Germany's death toll from the virus has been lower than most of its European neighbours and some lockdown measures have already been relaxed, but still thousands of protesters gathered across the country for the second weekend in a row.

Derided on social media as "covidiots" who risk causing a second wave of infections that could lead to a tightening of restrictions, protesters staged demonstrations against restrictions battering the economy and a perceived loss of civic freedom at several locations across the capital Berlin and the surrounding state of Brandenburg.

Spain's Prime Minister Pedro Sanchez has announced his government will seek to extend its coronavirus state of emergency for the last time until late June.

"The path that we are taking is the only one possible," Sanchez said, adding that the end of June should be when most of the hard-hit nation can begin returning to normality.

"It should be the last state of emergency [period] and will continue until the end of the rollback. For that reason, instead of being a 15-day [extension] it will be for about a month."

Spain first introduced a state of emergency decree on 14 March. Officials say that while the outbreak has been brought largely under control, restrictions must stay in place a bit longer as the lockdown is gradually phased out.

After pushing four previous extensions through parliament, support for Sanchez's left-wing coalition is waning among lawmakers and voters.

Some small protests against the government's handling of the coronavirus crisis and its economic fallout sprang up around Madrid this week, with demonstrators gathering to bang pots and pans and calling for the prime minister to resign.

"It doesn't matter what the demonstrations are about. The important thing is to maintain social distancing," Sanchez said.