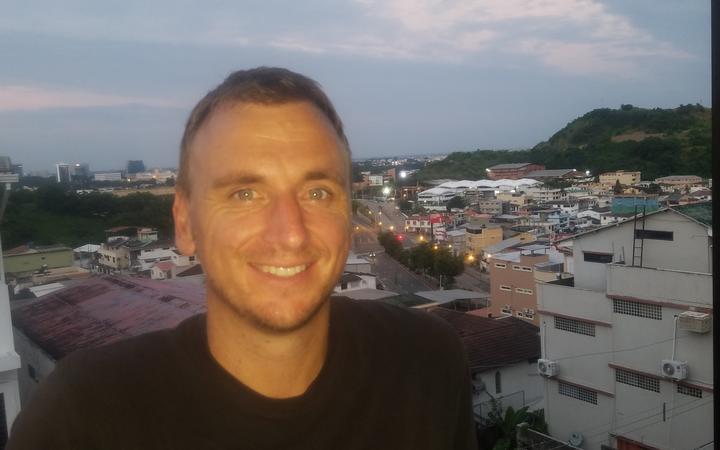 They were on the Galapagos Islands when the nationwide lockdown was announced a little over a month ago.

Even if they could get out of Ecuador where would they settle? Tanja isn't allowed to live in New Zealand yet and nor can Michael live in Germany. They could have been pulled apart.

The couple, who met in Europe three years ago when Michael was playing cricket for a small London-based club, have been travelling together in central and South America since April 2019.

The former Buller High School teacher told RNZ their flight from the Galapagos had been both stressful and surreal.

"Everything became very chaotic quickly. We happened to be on Isabela Island, and that doesn't have an airport. We got off on the last boat to leave," he said.

The boat took them to Santa Cruz, where Anderson said the pair had a "bit of a breakdown".

"There was a lot of misinformation being shared and panic around."

They couldn't get plane tickets off the island as nothing was open. On a walk to figure out what they were going to do next, fate intervened and the pair met people chartering a boat off the island.

"We met this English couple - we were lucky they were there. They were kind of organising people and we heard the army wanted to get all the tourists off the island to where they were meant to catch their flights. For us this was San Cristobal."

The couple ended up chartering a boat with 15 others.

"Here we are in this boat, in the dark, speeding to another island," he said.

There they had a nervous wait to see if they would get their evacuation flight to Guayaquil, Ecuador's largest city. Guayaquil, with a population of two million, is at the centre of the country's Covid-19 outbreak.

Ecuador's official Covid-19 death toll is 456, according to the Center for Systems Science and Engineering (CSSE) at Johns Hopkins University (JHU), but new figures from the Guayas province, which includes Guayaquil, suggest many thousands of Ecuadorians have died.

The government said 6700 death certificates have been issued in Guayas province alone in the first two weeks of this month - far more than the usual 1000 deaths there in the same period.

On arrival in Guayaquil, the couple were greeted by security staff who would not let them leave the airport unless they had accommodation confirmed. While the first couple of people they approached on Air BnB said no, they have found somewhere nice to call home.

To beat the 2pm curfew they were rushed into the city on a charter bus at 100km/h accompanied by a police escort.

Despite the ordeal, Anderson is calm, saying you have to try and take it in your stride.

"Some of it is a bit scary though... the stories of dead people in the streets and you can't get into a hospital unless you are critically ill."

The couple are sticking to a very strict routine, which involves only leaving the apartment to go to the supermarket. Face masks have to be worn outside.

The New Zealand consulate in Colombia, the nearest outpost, has been checking in on them.

Anderson has some income coming in from teaching Chinese students online, which is paying the bills, which has helped take one worry away.

He said they had decided to stay put as anywhere they went at the moment would be on lockdown too. They hoped their originally-planned July 4 departure goes ahead, but they were planning for different scenarios, including working at a school in Ecuador.

Ultimately, they were planning to live together. The question remains where.