US President Donald Trump says China should face consequences if it was "knowingly responsible" for the coronavirus pandemic.

"If it was a mistake, a mistake is a mistake. But if they were knowingly responsible, yeah, I mean, then sure there should be consequences," Trump told reporters at a daily briefing on Saturday (US time). He did not elaborate on what actions the United States might take. 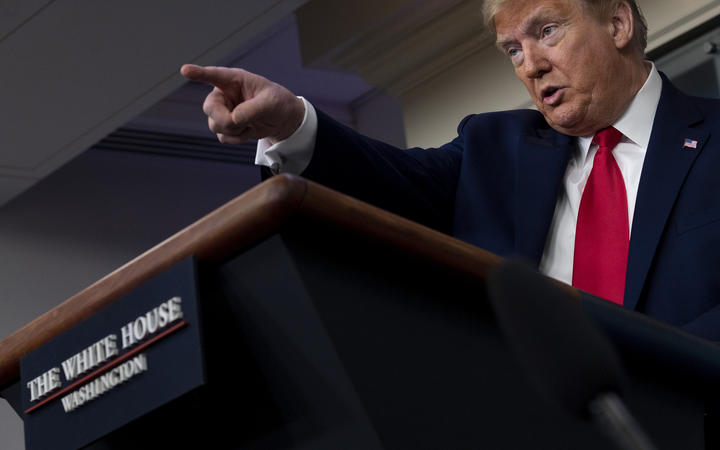 Trump and senior aides have sharply criticised China for a lack of transparency after the coronavirus broke out in its Wuhan province. This week he suspended aid to the World Health Organisation accusing it of being "China-centric".

Washington and Beijing, the world's two biggest economies, have publicly sparred over the virus repeatedly. Trump initially praised China's response to the outbreak, but he and other senior officials have also referred to it as the "Chinese virus" and in recent days have ratcheted up their rhetoric.

Trump said the US-China relationship was good "until they did this," citing a recent first-phase agricultural deal aimed at quelling a trade war between the two countries.

He said the question now was whether what happened with the coronavirus was "a mistake that got out of control, or was it done deliberately?"

"There's a big difference between those two," he said.

Trump also raised questions about a Wuhan virology laboratory that Fox News this week reported had likely developed the coronavirus as part of China's effort to demonstrate its capacity to identify and combat viruses. Trump has said his government is seeking to determine whether the virus emanated from a Chinese lab.

Trump also again cast doubt on China's death toll, which was revised up on Friday. China said 1300 people who died of the coronavirus in the central city of Wuhan - half the total - were not counted, but dismissed allegations of a cover-up.

Texas and Vermont to ease restrictions

Donald Trump says he is allowing the relaxing of measures because there are signs that the virus has passed its peak.

In several states demonstrations have continued with protesters demanding to be allowed back to work.

Mr Trump suggested some state governors were being too strict.

Health experts and some state governors have warned that lifting the restrictions too early could lead to more people becoming infected.