A last-ditch effort by the chief executives of major US airlines to try to win cash grants to weather the coronavirus crisis looked to be unsuccessful, say four congressional aides and airline officials. 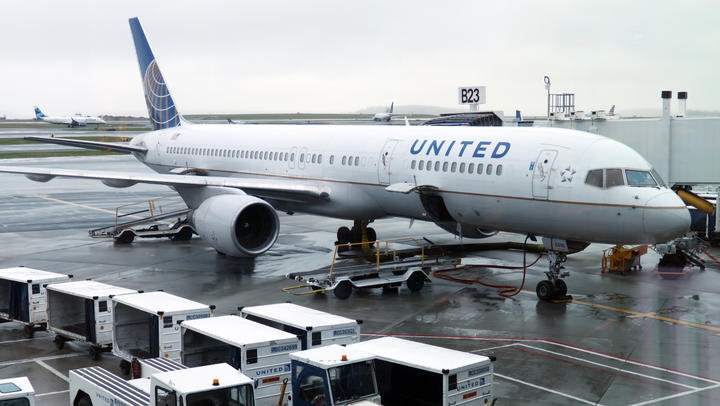 United Airlines said it was cancelling 90 percent of its international flights in April. Photo: AFP

Airlines had made a last ditch plea urging that $US29 billion of $US58b sought in assistance for airlines be in the form of cash grants. They had offered not to make any job cuts through 31 August if they won the cash and to accept restrictions on executive pay and to forgo paying dividends or stock buybacks.

The chief executives of 10 US passenger and cargo carriers had said in a letter that without direct cash assistance, "draconian measures" such as furloughs may be necessary.

Senate Republicans hope to unveil the text of the rescue and stimulus package on Sunday that could total $US1.6 trillion and is set to include $US50b in collateralized loan and loan guarantees for passenger airlines and $US8b for cargo carriers. Senate Democratic Leader Charles Schumer said there was still "no deal," so it is possible the final airline provisions could change in negotiations.

Senator John Thune, the Senate's No. 2 Republican, said earlier airline grants were not winning backing "at this point, I don't sense support for it here or with the administration. But like I said, nothing is done."

Airlines are expected to soon turn their attention to applying for government collateralized loans and the terms the legislation will include. The initial Republican plan said the US Treasury could demand stock, warrants or options as part of any airline loans.

The global coronavirus outbreak has forced airlines to cancel tens of thousands of flights and resulted in massive revenue losses. On Saturday, United Airlines said it was cancelling 90 percent of its international flights in April.

United, Delta Air Lines, American Airlines Group, FedEx, Southwest Airlines Co, UPS and others warned in their letter to lawmakers on Saturday that "time is running out."

They had urged Congress not to attach additional conditions.

"We respectfully urge Congress not to pursue opportunistic measures that will hurt, not help our ability to recover," they wrote. Some in Congress want airlines to agree to provisions such as limiting baggage and other fees, or committing to flying more environmentally friendly airplanes.

Unions representing workers in different parts of the aviation industry also made final pleas, with the head of the International Association of Machinists and Aerospace Workers asking Congress to "backstop" the airlines with direct aid for paychecks.

The president of the Association of Flight Attendants, Sara Nelson, blasted Senate Republican Leader Mitch McConnell saying under his plan "airlines and airports will cut jobs, and the debt they'll take on will lead to bankruptcies that will further hurt frontline aviation workers while executives get a free pass." McConnell's office did not comment.

"The breadth and immediacy of the need to act cannot be overstated. It is urgent and unprecedented," they wrote Saturday.

Other signatories to the letter were the chief executives of Alaska Airlines, JetBlue Airways, Hawaiian Airlines and Atlas Air Worldwide.

The Republican bill introduced on Thursday would set aside another $US150b for a separate fund and Treasury would determine who could qualify. Boeing Co, which has sought $US60b in US government loan guarantees for itself and the aviation manufacturing sector, could seek loans from that fund.

Senator Ted Cruz, a Republican, tweeted on Saturday that "some are pushing for a special carve-out just for Boeing & GE. That would be WRONG. Millions are losing jobs; we don't need bailouts or corporate welfare - those companies should participate in the same liquidity programs as everyone else."

Boeing on Friday agreed to suspend its dividend, not buy back stock and said its chief executive would forgo pay for the rest of 2020. Boeing and GE did not immediately comment Saturday.

Airport workers, many of whom are contracted, were also pleading with Congress to ensure that they too are protected in any bailout.