An Indian policeman is being hailed as a hero after he braved rioting mobs to save families during days of religious violence in Delhi. 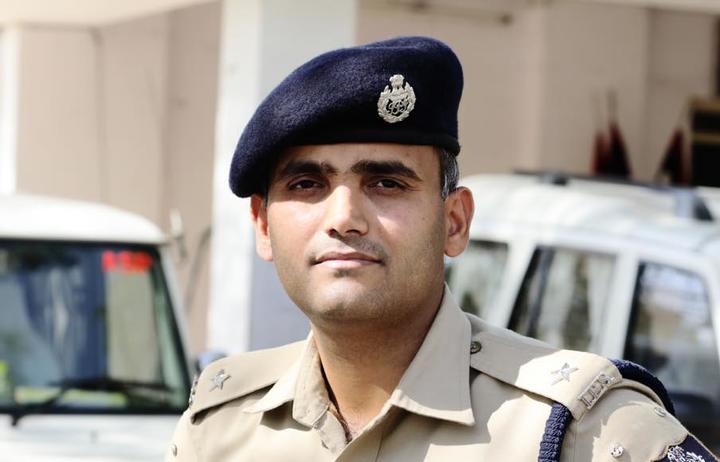 Neeraj Jadaun said he was only doing his duty. Photo: Facebook

Riots in the capital city broke out on Sunday, killing 39 people and injuring more than 200.

Neeraj Jadaun, a superintendent of police in neighbouring Uttar Pradesh state, said he was patrolling a border checkpoint on 25 February when he heard sounds of gunfire coming from Karawal Nagar in Delhi - just 200m away from him.

He saw a mob of 40 to 50 people setting vehicles on fire when one of them jumped into a house with a petrol bomb. At that point, Jadaun decided to break with traditional police protocol and made a split-second decision to cross the state border into Delhi.

"I chose to cross. I was willing to go alone despite being aware of the danger and the fact that it was beyond my jurisdiction. Those were the most terrifying 15 seconds of my life. Thankfully, the team followed me, and my seniors also supported me when I informed them later," he said.

"It was dangerous as we were outnumbered and the rioters were armed. We first tried to negotiate with them and when that failed, we told them that police would open fire. They retreated, but seconds later they threw stones at us and we also heard gunshots," he added.

However, Jadaun and his team held their positions and kept pushing back until the rioters finally left.

Richi Kumar, a reporter with the Hindi daily Amar Ujala, described Jadaun's decision as the "bravest act" he had ever seen.

"The situation was very dangerous. The rioters were fully armed and they were not ready to listen anybody. I can describe them as bloodthirsty. They were throwing stones at the police but Mr Jadaun did not back down. There was real danger of policemen being shot at by rioters," he told the BBC.

The violence first broke out in north-east Delhi between protesters for and against a controversial citizenship law.

But they have since taken on communal overtones.

Jadaun said the rioters he saw had come prepared for arson.

"The area had many shops with stocks of bamboo. A fire would have engulfed the whole area and had that been allowed to happen, the death toll in Delhi would have been much higher." 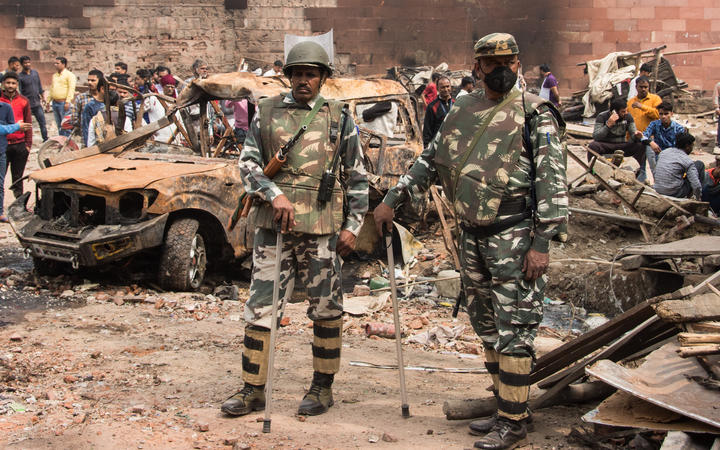 But, Jadaun is uncomfortable about being hailed as a hero.

"I am not a hero. I have taken oath to protect any Indian in danger. I was just doing my duty because I wasn't willing to let people die under my watch. We were in a position to intervene and we did that," he added.

Similar small acts of heroism - of Hindus and Muslims standing together - have also begun to emerge.

Subhash Sharma, from Ashok Nagar, one of the worst-affected areas, described how he ran to help after mobs set a mosque on fire.

"There were thousands of people in the mob and there were only a handful in the mosque. As soon as I saw it set on fire, I switched on the water pump in my house and ran there with a hose," Mr Sharma told BBC Hindi.

Murtaza, a man from the same neighbourhood, said he wanted to flee the area, but his Hindu neighbours told him not to leave.

"They assured us they would not let anybody harm us," he said.

BBC Hindi's Faisal Mohammed also spoke to two neighbours - a Hindu and a Muslim - from the Vijay park area in Maujpur, one of the areas worst-affected by the violence.

The two described how they rallied their neighbours to chase away a mob that had been burning vehicles and shattering windows in the vicinity.

"The next day we shut the main road and people from the neighbourhood gathered together and sat outside," one of the men, Jamaluddin Saifi, said.

Residents there also set up a "peace committee" - made up of both Hindus and Muslims - who went from house to house telling people not to believe rumours and to keep children inside.

As the Indian capital struggles to pick up the pieces, it is these stories that are giving residents some hope that life can eventually go back to normal.