Rioting has continued in Delhi for the third consecutive night, with reports of Muslim homes and shops being targeted by violent mobs. 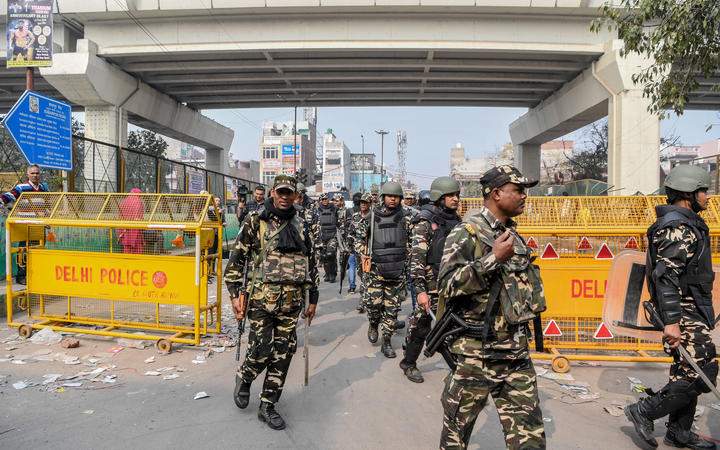 Eighteen people have been killed so far in the deadliest violence the Indian capital has seen in decades.

The clashes first broke out on Sunday between protesters for and against a controversial citizenship law.

But they have since taken on communal overtones, with reports of people being attacked based on their religion.

Photographs, videos and accounts on social media paint a chilling image of a city on the edge. There are reports of arson, of groups of men with sticks, iron rods and stones wandering the streets and of Hindus and Muslims facing off.

Both Hindus and Muslims are among the dead. Some 189 people are injured, according to officials at the Guru Teg Bahadur hospital, where many of them have been admitted.

I'm at Mustafabad, near the Loni Border, and new fires (set post-9pm) are burning in front of our eyes - Muslim jhuggis and tempos, according to onlookers - by masked men shouting JSR. Delhi Police are present saying they are unable to intervene. pic.twitter.com/tXT6k2qcXB

BBC reporters at the hospital say they saw people with all sorts of injuries, including bullet wounds, scrambling for treatment. They say the hospital seemed "overwhelmed", and many of the injured were "too scared to go back home".

In a rare midnight hearing, the Delhi high court ordered the government and police to ensure that the injured were safely taken to the nearest hospitals that are equipped to treat them.

Justices S Muralidhar and A J Bhambhani were responding to a petition by doctors from various local hospitals.

Eyewitnesses have said several members in the mob were carrying guns and there are reports of shots being fired from rooftops. Hospital officials also confirmed that many of the injured have gun shot wounds.

The violence is centred on Muslim-majority neighbourhoods in north-east Delhi - such as Maujpur, Mustafabad, Jaffrabad and Shiv Vihar - just 18km (11 miles) from the heart of the capital.

Main streets in these neighbourhoods are in shambles, with the stench of burnt vehicles and plumes of rising smoke, says BBC Hindi's Faisal Mohammed. He says he saw a partially burnt mosque, with pages from the Koran lying strewn on the ground.

"Two young men were picking up the pages torn pages and putting them in plastic bags," he said.

Another mosque was vandalised on Tuesday afternoon. Widely shared footage showed men trying to rip the crescent from the top of the minaret.

These areas are close to the Loni border - that Delhi shares with Uttar Pradesh state - which has now been sealed. Schools in the area have been closed, and year-end exams postponed. 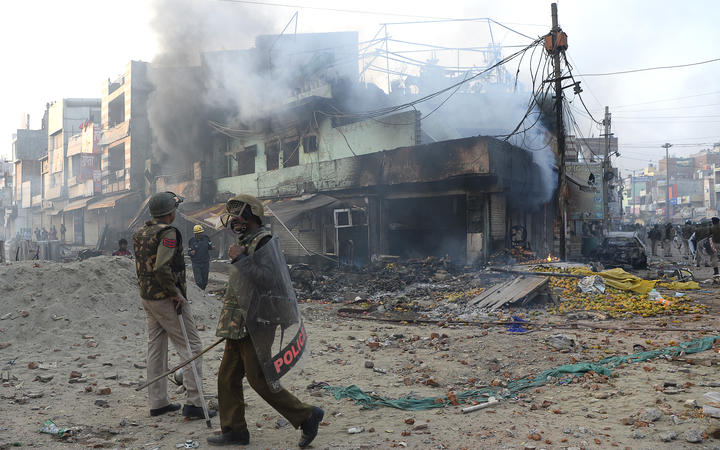 Police officers in front of vandalised shops following clashes between supporters and opponents of a new citizenship law, at Bhajanpura area of New Delhi. Photo: AFP

Many, including journalists, have tweeted and spoken of mobs demanding to know their religion. At least one photojournalist has said he was asked to remove his pants to prove his identity.

Most Muslim men are circumcised as it is considered to be an important part of their religion. People who question circumcision are sometimes accused of Islamophobia.

Delhi police spokesman MS Randhawa told reporters on Tuesday that the situation was under control and a "sufficient number of policemen" had been deployed. Paramilitary forces have been deployed as well.

But the police have been accused of being under-prepared and outnumbered. At least one of those who has been killed is a policeman, a constable named Ratan Lal.

The timing of the unrest is being seen as an embarrassment for Prime Minister Narendra Modi, who was hosting US President Donald Trump over the last two days on his first official visit to India.

The first deaths were reported on Monday, hours before Trump's arrival in Delhi.

As the violence escalated, it overshadowed Trump's visit, making it to national and global headlines.