US President Donald Trump arrived to a massive public reception after he landed in India's Gujarat state for his first official visit. 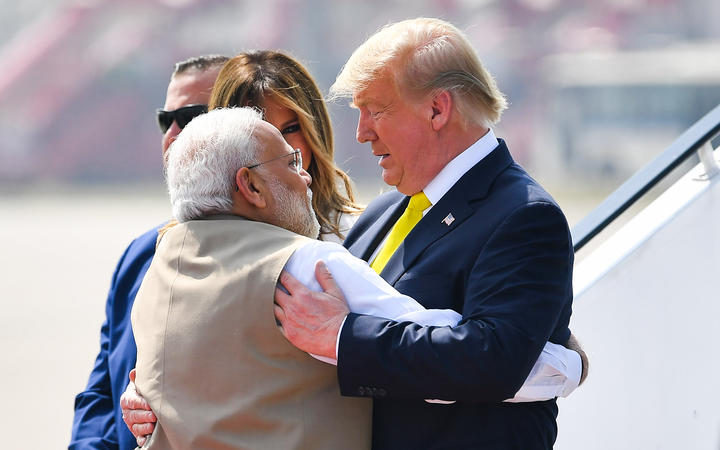 Trump was welcomed at the airport by Prime Minister Narendra Modi who enveloped him in a bear hug soon after he landed.

Trump's visit will focus on deepening ties between the world's two largest democracies.

The two leaders are now at the Sabarmati Ashram, where Mahatma Gandhi lived for 13 years.

Trump and First Lady Melania Trump tried their hand at a traditional Charka or spinning wheel, popularised by Gandhi as a form of protest against foreign-made cloth.

Thousands of Indians lined the road, straining to get a glimpse of the two leaders.

Billboards along the route are emblazoned with pictures of the men and carry slogans such as "two dynamic personalities, one momentous occasion".

After his trip to the ashram, Trump will travel to the Motera stadium, billed as the world's largest cricket venue. The two leaders are expected to address more than 100,000 people there. The event is being compared to the "Howdy, Modi!" rally they held in Houston last year which was attended by 50,000 people.

The road show, which is along the route to the stadium, will feature performers from across the country, showcasing the arts from different Indian states.

"I look forward to being with the people of India. We are going to have many millions and millions of people. It's a long trip. I get along very well with Prime Minister Modi. He is a friend of mine," Trump said ahead of his trip.

"I had committed to this trip a long time ago. I look forward to it. I hear it's going to be a big event… the biggest event they ever had in India."

But amid the fanfare, a much-talked about trade deal is unlikely to happen during the visit.

What is at stake during this visit?

The US is one of India's most important trade partners, with bilateral trade totalling $142.6bn in 2018. The US had a $25.2bn goods and services trade deficit with India, its 9th largest trading partner in goods. 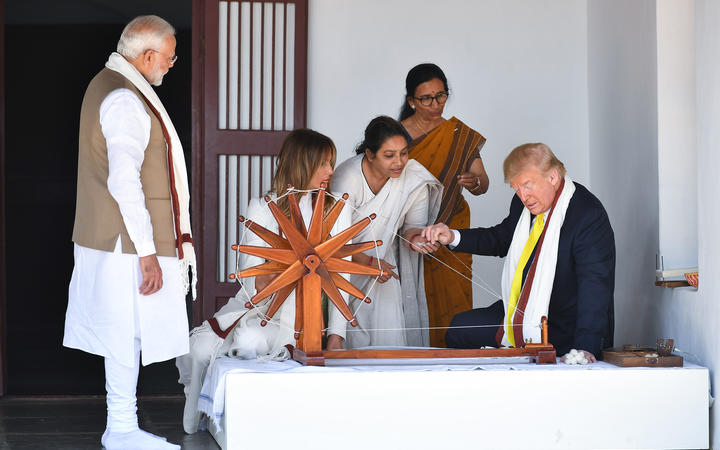 US President Donald Trump holds a string while checking a charkha, or spinning wheel, as First Lady Melania Trump and India's Prime Minister Narendra Modi look on during their visit at the Gandhi Ashram on 24 February, 2020. Photo: Mandel Ngan / AFP

Despite growing political and strategic ties, there's been tension over trade issues. Trump has said India's tariffs - taxes on imports - are "unacceptable", and has described India as the "king" of tariffs.

In June 2019, the US ended preferential trade status for India, the largest beneficiary of the Generalized System of Preferences (GSP) - a scheme that allows some goods to enter the US duty-free.

The move caused a diplomatic rift between the two countries after India imposed retaliatory tariffs on 28 US products.

An official US report last year said India's tariff rates on other members of the World Trade Organisation (WTO) remain "the highest of any major economy".

The two sides have also differed over price controls on medical equipment and India's new rules on data storage.

The trade deal was likely to resolve some of these issues. But just days before the visit, Trump announced that he was "saving the big deal for later on".

Reports say negotiations continued between the two sides until last week, but they were not able to reach a consensus on issues like the restoration of the GSP for Indian goods, and India agreeing to open some of its key markets for US goods.

The two sides are also expected to sign a clutch of other agreements relating to intellectual property rights, trade, and homeland security.

In a clear sign of ever closer defence relations, India is expected to sign two big deals with the US to acquire 30 American defence helicopters - MH-60R Seahawk and AH-64E Apache - worth more than $US2.6bn.

Also, the US energy firm Westinghouse is expected to sign a new agreement with state-run Nuclear Power Corporation of India for the supply of six nuclear reactors, according to Reuters. The US has been discussing the sale of nuclear reactors to India since a 2008 landmark civil nuclear energy deal.