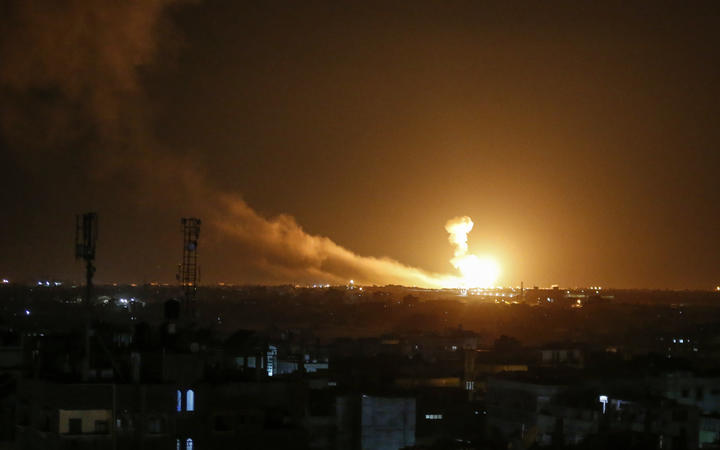 A ball of fire is seen following an Israel airstrike at Rafah in the southern Gaza Strip early on February 23, 2020. Photo: AFP

An Israeli military statement said its forces had "struck Islamic Jihad terror targets south of Damascus" in addition to "dozens" of Islamic Jihad targets throughout the Gaza Strip.

The air strike in the Adeliyah region outside Damascus targeted what the Israeli military called "a hub of Islamic Jihad's activity in Syria," including the research and development of weapons.

The strike escalated the latest round of hostilities, which began around dawn on Sunday, when, Israel said, its troops killed an Islamic Jihad member who was trying to plant explosives near Israel's border fence with the Gaza Strip.

Video footage shot by a Gaza photographer and widely posted on social media showed what appeared to be the lifeless body of an Islamic Jihad militant dangling from an Israeli military bulldozer as it removed the corpse.

Palestinian health officials and other onlookers said two other Palestinians were wounded by Israeli gunfire directed at a group of people who had approached the area and tried to recover the body.

The images caused an uproar in Gaza, with many social media commentators calling for retaliation. 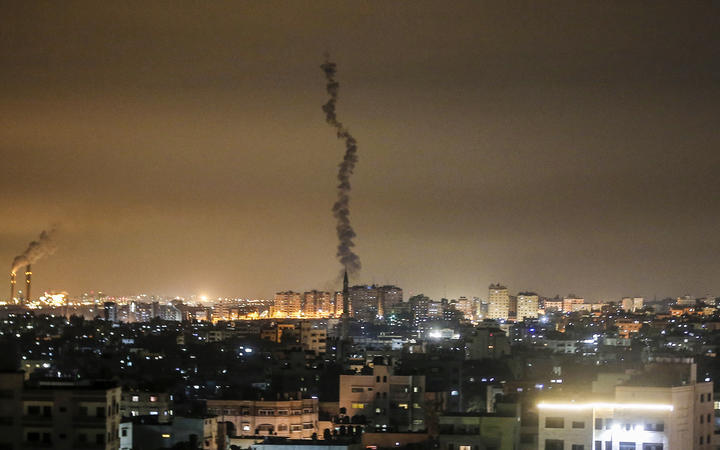 The smoke trail of a rocket fired by Palestinian militants flying over the Gaza Strip. Photo: AFP

Islamic Jihad fired a barrage of rockets from Gaza into Israel, setting off air-raid sirens in communities such as Ashkelon. Israel hit back with a series of air strikes in Gaza.

The rockets sent residents of southern Israel running for shelters. Some of the rocket fire was intercepted by Israeli aerial missile defences, and there were no reports of any Israelis injured.

The Israeli military said that among the "dozens" of targets struck in Gaza were underground infrastructure and compounds in Rafah that had been used to store raw material used for manufacturing rockets.

Shortly before midnight on Sunday, the Syrian state news agency SANA quoted a military source saying that Israeli planes had entered Syrian airspace and targeted areas around Damascus with a wave of guided missiles.

Syrian state-run al-Ikhbariya TV aired footage of what it said were explosions set off in the Damascus night sky by the air defence system shooting down missiles.

The Syrian military source said most missiles were destroyed before reaching their targets and that the aftermath of the strike was being examined.

Israel says it has carried out hundreds of strikes against targets in Syria in recent years.

In November, Islamic Jihad said Israel had targeted the house of one of its officials in Damascus, killing one of his sons.