There have been tears and anger at a Brisbane vigil for Hannah Clarke and her three children who were murdered by her estranged husband. 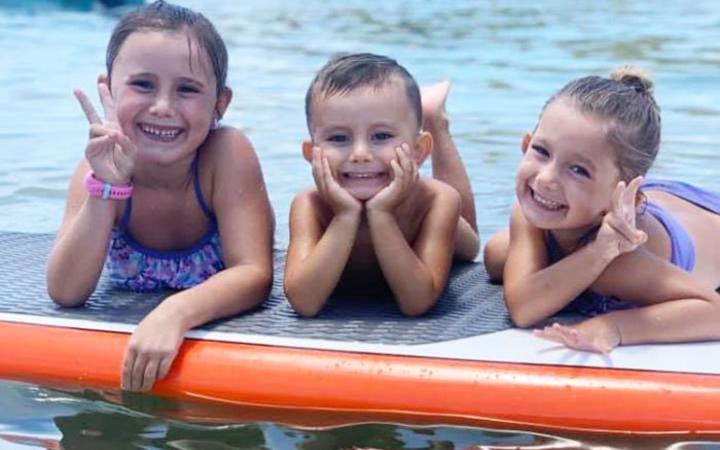 More than 1000 family, friends and strangers held a public memorial on Sunday evening, remembering the 31-year-old mother as a beautiful, strong woman, and her children Aaliyah, 6, Laianah, 4 and Trey, 3, as happy and joyful.

Clarke's estranged husband New Zealand-born Rowan Baxter doused her and their children with petrol and set them alight in the family car in Camp Hill on Wednesday - shocking and sickening the nation.

Supported by his father while speaking to mourners, Clarke's brother Nathaniel Clarke described his sister as someone who would always put others before herself.

"You would always leave there smiling. She had to share everyone's big moments and she would always be there.

"When something like this happens to someone like that, you lose a bit of faith in the world."

Baxter, who has been branded a "violent monster" by Clarke's family and friends, died at the scene from self-inflicted wounds.

"I don't want us to get caught up in the blame game - there was no excuse, there could never be an excuse," friend Nikki Brookes said.

"We are a nation in pain, whether you knew our beautiful Hannah or not, we are all deeply affected by this tragedy."

Hannah's father Lloyd Clarke thanked first responders and those who had supported the family.

"This has been the hardest week of our lives," he said.

"[We] have been overwhelmed by the number of people who have gone out of their way to offer their support and help when our whole world has collapsed.

"You've restored our faith that there are good and decent people in this world."

Clarke's friend Lou Farmer said she did everything for her children.

"She was the most beautiful, loyal, passionate, brave, loving woman and mother I know," she said

"In their short lives Hannah, Aaliyah, Laianah, and Trey loved hard and laughed every single day.

"Hannah carried the weight of the world on her shoulders and you never knew it, her strength was only matched by her wicked sense of humour.

"Life will never be the same without you here, you have touched the hearts of all Australians and we pledge your deaths will not be in vain."

"I have no doubt that Hannah would have made an incredible police officer," she said.

"Right through to her passing Hannah showed amazing courage and heroism, ensuring she gave emergency services at the scene a detailed statement of the horrific events that unfolded."

"This unthinkable act of brutality took the lives of three innocent children and their beautiful mother at a time they were striving for a new future," Palaszczuk said.

"They were the victims of one of the most abhorrent incidents of domestic violence to have ever happened in this state.

"To Hannah's family and friends, my words simply cannot convey the devastation and the heartbreak that you must be feeling.

"You must be so proud of the heroic acts your daughter and sister displayed in horrific circumstances.

"Hannah and her children will never ever be forgotten."

"We weep for them and the evil that took their lives."

Brisbane City Hall has now set up a charitable trust called Small Steps for Hannah to help support the family. Money raised will also be used to raise awareness about domestic violence.

Calls for action on domestic violence

A landmark report in 2018 found one woman died every week due to the nation's domestic violence crisis and the Palaszczuk Government has fast-tracked recommendations from Quentin Bryce's Not Now, Not Ever report to tackle the issue.

"The fundamental thing men can do is call it out," he said.

"When something sounds fishy or sounds a little bit over the line, let's call [other men] out on it," he said.

The ABC has been told Baxter won part custody of the children, but rejected the offer, a week before he set the family alight.

He was due to face court for allegedly breaching a domestic violence order when he died.