A mother and her three children - all aged under 10 - have died after the car they were in was allegedly set on fire by her estranged husband in Brisbane. 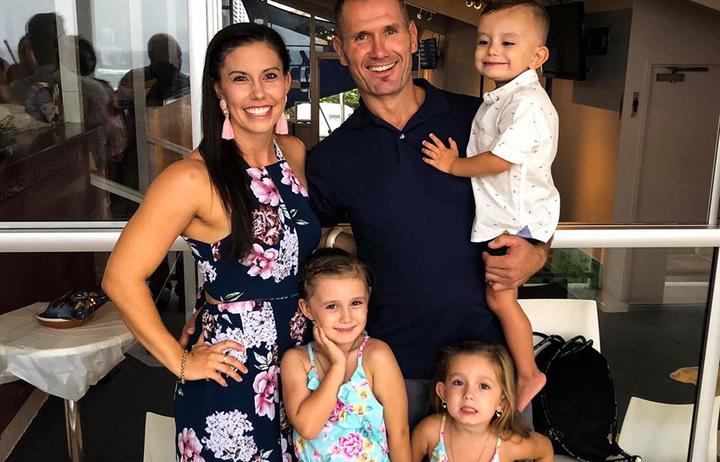 Hannah Baxter, 31, was taken to the Royal Brisbane and Women's Hospital in a critical condition, where she died early on Wednesday evening.

The couple's three children, aged six, four and three, died in the vehicle in the suburb of Camp Hill about 8:30am Wednesday.

Baxter's husband, Tauranga-born man and former Bay of Plenty rugby player Rowan Baxter, died on the footpath near the car with self-inflicted stab wounds after allegedly dousing his family in petrol.

The ABC reported that they understand that Ms Baxter had jumped from the vehicle at the time and yelled "he's poured petrol on me".

Police said Mr Baxter had self-inflicted stab wounds and had got himself out of the car, but died on the footpath.

Queensland police attended the scene about 8.30am where the three children aged six, four and three were found deceased inside the vehicle.

Australian Detective Inspector Mark Thompson said it was not known if an accelerant was used to start the fire.

"We have three deceased children under the age of 10 in the vehicle," he said.

"We have another deceased male, who was known to the children."

Australian police said their preliminary investigations indicated Ms Baxter was driving the car and Mr Baxter, 42, was in the front passenger seat prior to the incident.

"It is a horrific scene," he said.

He said there were "other areas of interest" and anticipated that other crime scenes would be declared.

"How the fire actually occurred has not been ascertained at the moment.

"For us to call it a murder-suicide or a tragic accident, it's inappropriate for us to try to do that.

A wing or centre, Rowan Baxter trained with the Warriors in 2005 and was selected for their pre-season match against the Parramatta Eels, but did not feature in an NRL competition game. He had previously played rugby for Bay of Plenty.

Baxter's brother Charles played for the New Zealand rugby sevens team in the early 2000s and as a wing for the Bay of Plenty Steamers.

A relative of Hannah Baxter said her parents had exhausted themselves to try and help her "escape a monster".

On a Facebook fundraising page for funeral expenses, Stacey Roberts said her sister-in-law was a person with a beautiful soul and that her children were only a reflection of her.

She said their lives were taken by a "disgusting human being" they called their father.

The post said the children were Hannah Baxter's life and all she ever wanted was happiness.

'He tried his best to get to the car'

"Somebody did step in to try and help that was close by," Tong said.

"I think he tried his best to get to the car."

The man received minor burns to his upper body and face that were not life-threatening.

Tong said Ms Baxter had severe burns to a significant part of her body.

"We secured her airway on scene and she was transported, lights and siren, to [hospital]," he said.

Seven ambulances were at the scene as well as more than 30 police officers.

Crews that attended the scene have been stood down and will be debriefed.

"The first crew that arrived on the scene were confronted with a car fire," Tong said.

"We did all we could, but it was confronting."

Camp Hill resident Murray Campbell said he was at home when he heard the car explode.

"I was out the back and came running down the side and … the rest is history," he said.

Phil Patane said he raced to the scene to check on his parents, who are residents of the street.

He said they were distressed.

"Oh, it's just devastating, really. You wouldn't think it would happen here in this street."

Lachlan Amore, 18, has lived in the area his whole life and said the incident was frightening.

"It's really, really scary. You wouldn't expect it," he said.

"I've been here my whole life and I wouldn't expect anything from here. It's just frightening. Just really frightening."

A house at Carindale registered to the Baxter family has been cordoned off by police as a place of interest.

- ABC with additional reporting from SunLive