The presidents of Israel and Poland called for greater efforts to combat anti-Semitism, holocaust survivors and international leaders are honouring victims of the Nazis at the former Auschwitz death camp. 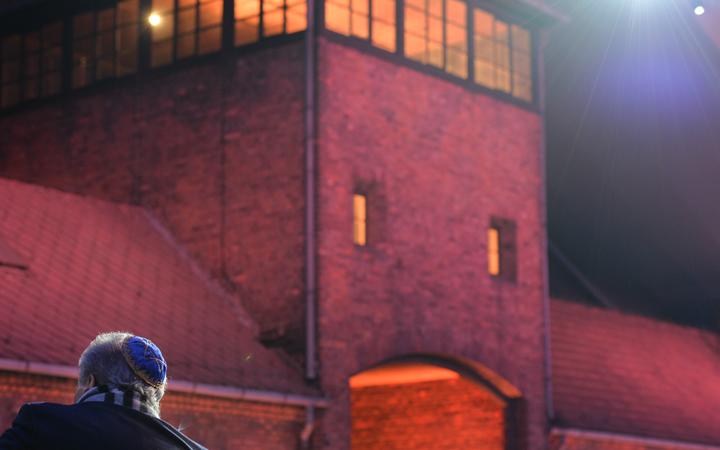 The official ceremony at the Gate of Death marking the 75th anniversary of the liberation of the former Nazi-German concentration and extermination camp Auschwitz. Photo: AFP / Artur Widak / NurPhoto

The presidents of Israel and Poland called for greater efforts to combat anti-Semitism as the world marked 75 years since the liberation of the Auschwitz death camp, amid concerns over a global resurgence of anti-Jewish prejudice.

Israeli President Reuven Rivlin and Polish president Andrzej Duda laid wreaths together at the site of the former camp in Poland.

More than 1.1 million people, most of them Jews, perished in the camp's gas chambers or from starvation, cold and disease.

"Our duty is to fight anti-Semitism, racism and fascist nostalgia, those sick evils that... threaten to eat away at the foundations of our democracies," President Rivlin said at a venue near the former camp, which is now a museum.

Polish President Andrzej Duda, who did not attend Israel's national Holocaust Memorial last Thursday because he was not allowed to speak, thanked Rivlin for his presence at Auschwitz.

"This presence is a sign of remembrance, it is a visible sign of opposition to inhuman treatment, hatred, against all forms of hate, especially racist hate," Duda said.

Nazi Germany murdered about six million Jews in its campaign to dominate other races and nations.

This may be the last major anniversary where so many survivors are able to attend.

There is widespread concern about high levels of anti-Semitic intimidation and violence in several countries and the proliferation of hate speech on the internet.

In Paris, French President Emmanuel Macron spoke at a ceremony to mark the 75th anniversary, including additions to a wall of remembrance for 77,000 Jews deported to concentration camps from France.

The Shoah Memorial was renovated, with 175 extra names and 1,498 more birth dates added after research in Holocaust archives.

"The return of this anti-Semitism is not just a problem for Jews. It is a problem for all of us. It is the Republic's problem," President Macron said.

Anti-Semitism has no place in our global society - Ardern

In New Zealand, Prime Minister Jacinda Ardern paid tribute to the millions who died during the Holocaust and declared anti-Semitism had no place in the world.

Last night, Ms Ardern acknowledged the immeasurable loss of life and pain experienced by the Jewish community around the world.

"Anti-Semitism has no place in our global society. It is an assault against our shared humanity. And yet we find ourselves in a world that seems to have forgotten the horrors of history. New reports of direct attacks targeting the Jewish community are still frequent. Lives continue to be lost, sites of worship continue to be damaged.

"Just recently in Wellington a temple was defaced. This is not the legacy of a nation or the legacy of a world that has learnt and understands fully the impact of the holocaust.

And so the work must continue here and abroad.

She told those gathered that hate speech in the name of nationalism or other causes was not welcome in New Zealand.

"Devastatingly we were reminded of that last year in Christchurch with March 15th and I want to acknowledge especially the way in which the Jewish community reached out to our Muslim communities to offer a range of support after the attacks in March. Thank you."

The government has been criticised in recent days for failing to send any representative to the Fifth World Holocaust Forum in Israel, citing a concern that security was not able to be provided. 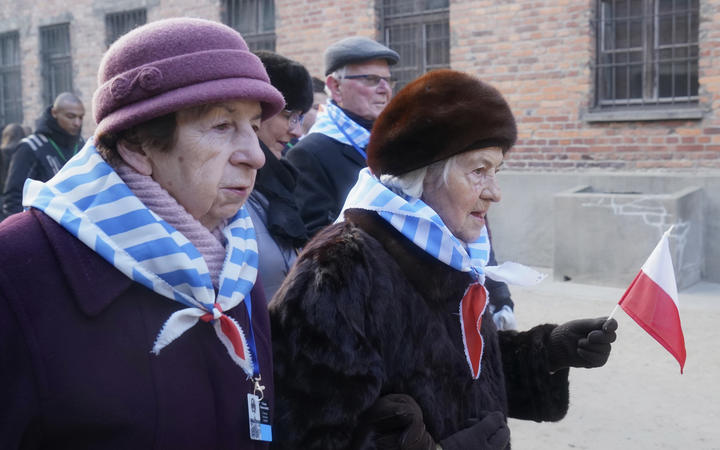 More than 200 survivors travelled to Auschwitz from across the globe to mark the 75th anniversary. Many wore blue-and-white scarves - a reminder of the striped prison uniforms that victims wore in the concentration camps.

A woman who was born in the camp a few months before liberation, 75-year-old Jadwiga Wakulska, said "my mother was holding me in her arms as a four-month-old child, as she was standing in line to the gas chamber...

"We were coming closer and closer to the gas block and one of the Germans saw me. He looked at me and since I was a blonde baby with blue eyes he took me aside and told me I will survive. Thanks to that we survived. My mum says that thanks to the fact that I had a Nordic appearance, I saved her and myself."

Returning to the site where her relatives were murdered, 92-year-old Holocaust survivor Yvonne Engelman, who now lives in Australia, recalled the horrors of the camp.

"We could hear children coughing, crying, choking from the gas and also the smell of human flesh and the great fear we experienced that maybe you will be the next victim," she said.