By Guy Faulconbridge and William James

Britain's Union Jack has been removed from lines of EU member state flags at the European Council and European Parliament buildings in Brussels ahead of the United Kingdom's exit from the bloc at midnight local time. 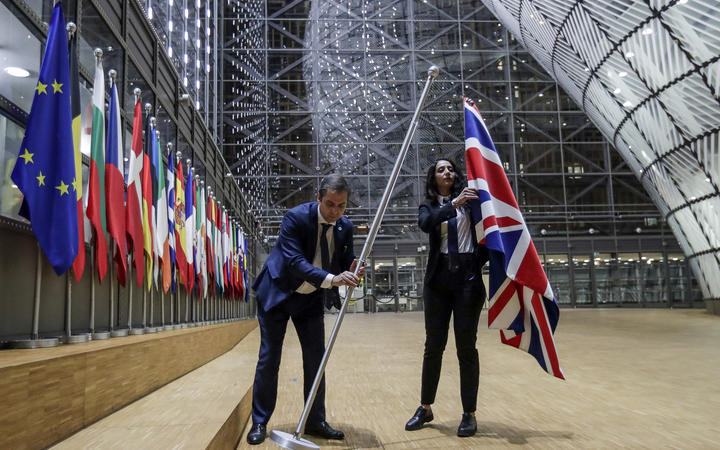 The United Kingdom leaves the European Union today with a mixture of joy, anger and indifference, casting off into the unknown in one of the biggest blows yet to Europe's attempt to forge unity from the ruins of World War Two.

The EU's most powerful leaders, German Chancellor Angela Merkel and French President Emmanuel Macron, cast Brexit - due at 2300 GMT - as a sad moment that was a turning point for Europe. The EU warned that leaving would be worse than staying.

In the United Kingdom's most significant geopolitical move since its lost its empire, it turns its back on 47 years of membership and must begin charting its own course for generations to come.

At the stroke of midnight in Brussels, the EU will lose 15 percent of its economy, its biggest military spender and the world's international financial capital - London.

Brexit supporters burned an EU flag outside Downing Street, where Prime Minister Boris Johnson lives. Some EU supporters were mocked by a larger group of Brexiteers nearby chanting "Bye-bye EU" and "Shame on you" to the tune of Auld Lang Syne.

"This is the moment when the dawn breaks and the curtain goes up on a new act," said Johnson, one of the leaders of the "Leave" campaign in the 2016 referendum. "It is a moment of real national renewal and change."

Johnson planned to celebrate with English sparkling wine and a distinctly British array of canapés including Shropshire blue cheese and Yorkshire puddings with beef and horseradish.

In Brussels, the Britain's Union Jack was lowered at the EU council building and the bloc's circle of 12 stars on a blue background was removed from outside the British embassy.

Leaving the EU was once far-fetched: the UK joined in 1973 as the sick man of Europe and less than two decades ago British leaders were arguing about whether to join the euro.

But the turmoil of the euro zone crisis, fears about mass immigration and a series of miscalculations by former Prime Minister David Cameron prompted the 52 percent to 48 percent vote to leave. 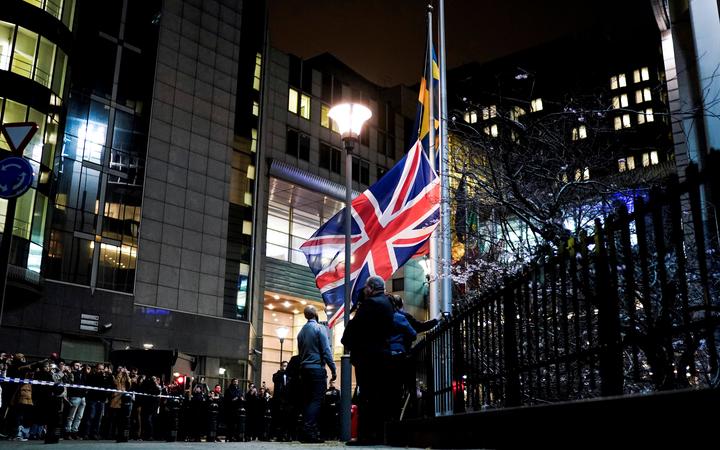 People take down the United Kingdom's flag from outside the European Union Parliament in Brussels. Photo: AFP

The final parting of the EU's most reluctant member is an anticlimax of sorts.

Beyond the symbolism, little will change until the end of 2020.

By then, Johnson has promised to strike a broad free trade agreement with the EU, the world's biggest trading bloc.

"These negotiations certainly won't be easy," Merkel said, cautioning London that if it deviated from the EU's rules then its access to the EU's market would be limited.

Macron said Britain it could not expect to be treated the same way as when it was part of the club.

"You can't be in and out," Macron told the French in a televised address. "The British people chose to leave the European Union. It won't have the same obligations, so it will no longer have the same rights."

Some Britons will celebrate and some will weep - but many will do neither. 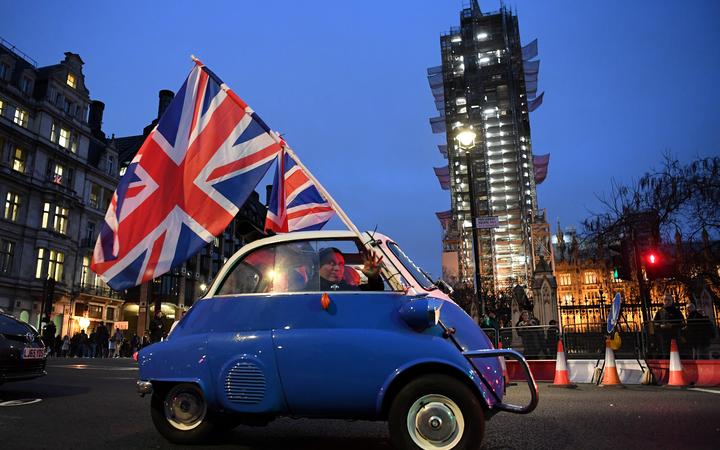 A man waves Union flags from a small car as he drives past Brexit supporters gathering in Parliament Square, near the Houses of Parliament in central London on Brexit day. Photo: AFP

For proponents, Brexit is "independence day" - an escape from what they cast as a doomed German-dominated project with a doomed single currency that is failing its 500 million people.

They hope departure will herald reforms to reshape Britain and propel it ahead of its European rivals.

Karen Evans, a 47-year-old hairdresser carrying a Union Jack, dismissed the concerns of "Remainers": "They lost. They need to get over it. They are bad losers. This is a day for celebrating."

Opponents believe Brexit is a folly that will weaken the West, shrivel what is left of Britain's global clout, undermine its economy and ultimately lead to a less cosmopolitan set of islands in the northern Atlantic. They say Britain will now have little option but to cosy up to Trump.

David Tucker, a pro-European of 75, said he had come to London from Wales to march in the hope that others would keep alive the hope that Britain would one day rejoin the EU:

"It is a tragedy," he said. "We were once part of the world's most powerful economic bloc. Now we are just an inward-looking island that is going to get smaller."

"It's a very sad day," said engineer Roger Olsen, 63. "I think it is a disaster. An absolutely wrong thing. And I think time will prove that we have taken the wrong course."

Brexit was always about much more than Europe.

The referendum exposed deep divisions and triggered soul-searching about everything from secession and immigration to empire and modern Britishness.

Brexit has tested the very fabric of the supposedly united kingdom: England and Wales voted to leave the bloc but Scotland and Northern Ireland voted to stay.

Scotland's first minister, Nicola Sturgeon, used the moment to demand a second independence referendum. A poll on Thursday suggested a slim majority of Scots would now back a split because of Brexit.

But after the twists and turns of 3-1/2-years, many voters are simply happy the wrangling is over. "I just wanted to see it done with," said Lee Stokes, a 44-year-old project manager.