Firefighters in Victoria and New South Wales are battling to contain huge blazes burning across Australia's south-east, as a wind change that initially fanned erratic fires brings a brief reprieve. 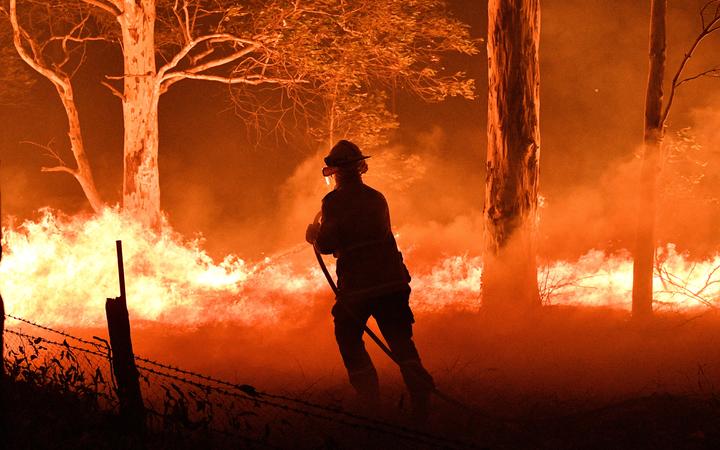 In NSW, erratic fire conditions had been predicted well into the night. However a blaze in the Blue Mountains, west of Sydney, was easing at 7am (5am local time).

The NSW Rural Fire Service (RFS) Commissioner said there was no substantial damage to properties and no loss of life from yesterday's blazes.

"We had the benefit of visiting teams the day before yesterday and the investment in strategy … to limit their potential for spread under yesterday's conditions has really yielded dividends."

The Erskine Creek fire was burning out of control to the south of Wentworth Falls, but a forecast southerly change that was predicted to hit between midnight and 5am did not eventuate across the fireground, which eased fire activity.

The change had been expected to push the fire towards Leura and Wentworth Falls, with residents told to make final preparations to protect their properties.

Elsewhere, a "mega-blaze" formed at about 9:00pm last night as severe weather conditions fanned fires in the Snowy Mountains area.

"In a way, when they touch up, it is a good thing because they're running out of fuel," he said.

"But … we have seen the fire, the Green Valley fire head into Victoria. It has come back in towards NSW. So too has the Dunns Road fire.

"The only available viable containment strategy is to tie them together and burn out the available fuel around them."

At 7am, there were four watch and act alerts in NSW, with the Erskine Creek fire downgraded to advice in the Southern Highlands area near Bundanoon.

Earlier, the Bureau of Meteorology (BOM) in NSW said forecasters were seeing an "increase in bushfire risk as the strong southerly change continues to make its way north through the night".

"The gusty winds may make local fire behaviour erratic as they hit the different blazes."

Along the Alpine border of the states, the NSW "mega-blaze" met with the northern tip of the Corryong fire, which has razed homes and forced evacuations in Victoria.

In the East Gippsland and Alpine communities, Victorian firefighters were facing strong, gusty and unpredictable winds as the weather change moved through.

It had been a nervous wait for people in Victoria's Alpine towns, but conditions eased overnight as the BOM cancelled its severe wind warning alert.

At 7am in Victoria (5am local time), there was one emergency warning in the state's east and 16 fires at watch and act level, and communities were urged to stay vigilant.

Authorities warned the danger was "far from over" as exhausted crews worked to use the milder conditions to contain fires across the state's east before temperatures rose again.