Two people have been confirmed dead in New South Wales as authorities meet this evening to identify the best way to evacuate by sea those trapped at coastlines by deadly bushfires.

One person is missing in the region, presumed dead, while four people are also missing in Victoria.

Naval vessels, military helicopters and fixed-wing aircraft are being prepared for evacuations in Victoria at the request of the state government.

Fires have closed the Princes Highway in many locations in east Gippsland, and also between between Nowra and Bega in New South Wales, meaning people cannot get out of the regions by road.

Meanwhile, police have warned all telecommunications in New South Wales' south coast will be lost tonight.

Marine Rescue and Surf Life Saving members are meeting to map out the evacuation of people needing medical assistance at Bermagui in New South Wales.

It could involve ferrying people from the beach on inflatable rescue boats to Marine Rescue and Police craft waiting off-shore. An estimated 5000 people are sheltering at the Bermagui Surf Lifesaving Club, with record numbers also taking refuge at Tathra, Batemans Bay and Broulee surf clubs.

Thousands of holidaymakers were forced to flee to beaches to escape the flames today. 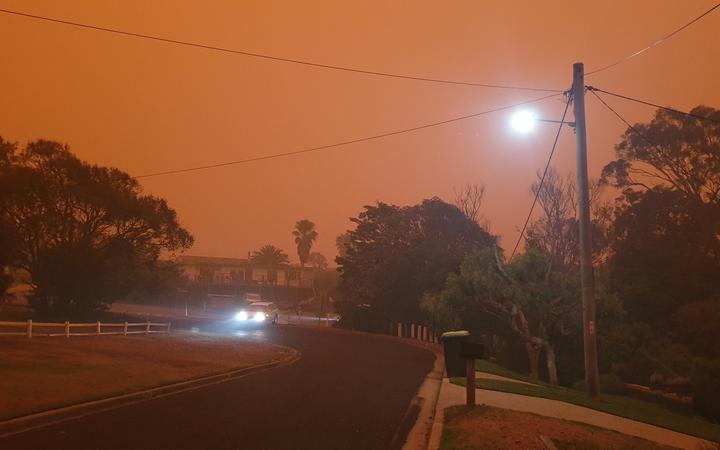 RNZ reporter Tess Brunton is staying in the seaside village of Tathra, approximately 40km south of Cobargo, where a father and son died in a fire today that destroyed dozens of turn-of-the-century structures in the village.

Brunton, who had been holidaying in the region, said Tathra was on high alert. 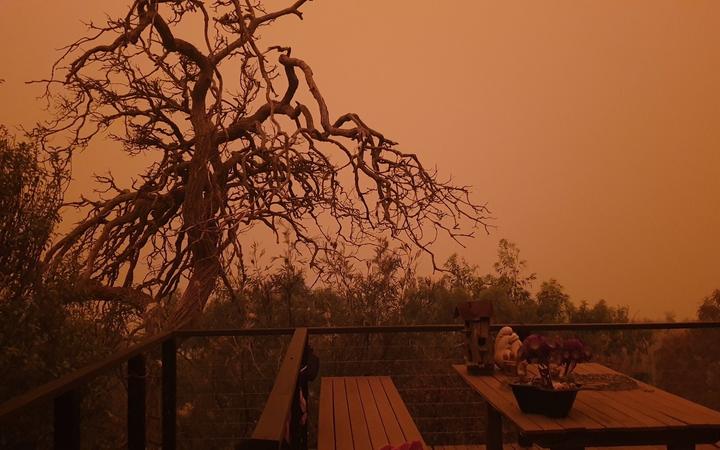 The scene from Tathra, with ash dropping from the sky, which has darkened with a foreboding orange glow. Photo: Tess Brunton

"There is that southerly [wind] change and we're not sure how far that fire will be pushed," Brunton said today.

She had packed a go-bag and her family had water tanks ready to defend the property if it came to it.

"At the moment we are told that it is okay to be in Tathra, but there's not going to be many options if the fire comes.

"There's not going to be many options for us to be able to evacuate.

The village was usually a hotspot for tourists, but she said it was eerily quiet, with the only people there being residents and evacuees with nowhere else to go.

New South Wales Rural Fire Service Commissioner Shane Fitzsimmons said it was unsafe for police to get to locations affected by blazes. One person remains missing near Narooma.

A further four people are unaccounted for in the state of Victoria, the site of some of the fiercest recent fires. Forty-three structures, some of them homes, have been destroyed at Sarsfield and Buchan in East Gippsland.

A public cheer erupted from the jetty at the fire-beseiged coastal town of Mallacoota in Victoria, as the wind direction changed today.

The township turned red as fire ringed it, one of eight emergency bushfires burning in the state - most in East Gippsland.

The chief fire officer at the Country Fire Authority, Steve Warrington, said the wind change meant the fire had now bypassed the town.

Back at Tathra, Brunton said campervans and motorhomes had been parked at the beach all day, full of people who had left their homes.

At midday, the sky across the town had turned dark, with an orange glow.

The street lamps were on and the lights inside houses were needed so people could see.

Normally the home had views of the water, but Brunton said the only way she could tell they were at the beach was because of the sound of waves.

"There is thick smoke that is oppressively blanketing Tathra," she said.

To escape the heat, Brunton took a swim, but found the water was full of ash, as even more dropped around her.

"You felt ash in your eyes and you could taste it in your mouth."

Two years ago a fire ravaged the village. She hoped this wouldn't be a repeat.

"At the moment we're lucky. We're the lucky ones because we don't have fires at our door.

"We don't know how long that will last for and we're just hopeful," Brunton said.

There have been 11 confirmed casualties this bushfire season, which included the death of a volunteer firefighter on Monday, killed after his truck was blown over by strong winds.

Australia has been battling huge bushfires, mostly across its east coast, for several weeks. The blazes have destroyed more than 4 million hectares of land.