About 4000 people in Mallacoota in the Australian state of Victoria have headed to the coast, ready to jump in the water as winds push an emergency-level bushfire towards the town. 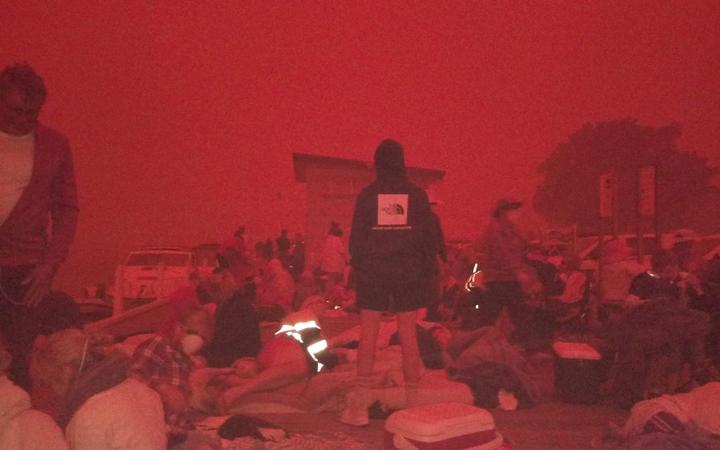 People at the wharf in Mallacoota, Australia. Photo: Twitter/@bluesfestblues

An update from emergency services at 8.28am said the fire front was expected to reach the town in the next half hour.

Resident Don Ashby spoke to ABC Gippsland just after 8.30am and said the town was like "the darkest, darkest night" and emergency sirens were going off.

Victorian authorities have confirmed multiple properties have been lost in fires burning through the state's east.

Resident Mariska Ascher told ABC about 7.15am she was staying in her home and the fire seemed "extremely close".

"It's really horrible, it's the worst it's been. It's really close," she said.

"It's absolutely frightening. Black leaves are hitting our deck."

The fire moving towards Mallacoota started at Wingan River on Sunday and spread rapidly towards the coast.

#Mallacoota is turning pinkish red. Still no flames visible from where I am but plenty of hot embers and the roar is undeniable. VicEmergency notifications are going wild. pic.twitter.com/ang6eTWz8B

Sister in a BRIGHT ORANGE work suit blending in with the #Mallacoota sky pic.twitter.com/SfK93GhbUU

10:30am update from Dad at the wharf in Mallacoota - “fire front not far away” #Mallacoota #bushfirecrisis pic.twitter.com/MvgeiZqujM

Firefighters were cutting down trees in the area yesterday to mitigate risk and fire trucks surrounded people camping near the water, spraying down the area to keep it cool.

Resident Mick Dunne told the ABC many residents were preparing to lose their homes.

"We plan but there's no easy exit from the town. Those who left did so nervously, and those who stayed do so nervously," he said.

Yesterday, fires damaged homes in Melbourne's north as dozens of emergency warnings were issued across Victoria during extreme weather and soaring temperatures.

Eight emergency warnings remained in place this morning - seven in East Gippsland, and one east of Albury near the New South Wales border.

A firefighter who died yesterday in the Green Valley blaze, 70km east of Albury, was named as 28-year-old Samuel McPaul.

The NSW Rural Fire Service said his truck was lifted off the ground in a "freakish weather event". 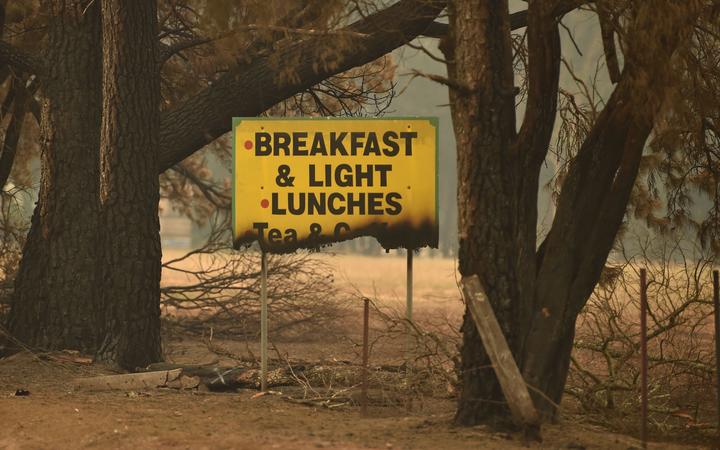 A sign if left half burnt after bushfires ravaged the town of Bilpin, 70km west of Sydney on December 29, 2019. Photo: PETER PARKS / AFP

Properties lost across 'a number of different locations'

Authorities confirmed shortly after 6am that a bushfire had affected the town of Orbost and the surrounding communities.

Bruthen CFA said a bushfire that was threatening the town breached the defence perimeter about 8.45pm yesterday.

Crisp said there were "multiple properties across a number of different locations" that had been lost.

Communities at Nowa Nowa, Bruthen, Suggan Buggan, Genoa, Goongerah, Ensay and the outskirts of the popular tourist town of Lakes Entrance were also under emergency warnings.

People in the areas surrounding Nowa Nowa, Bruthen and Lakes Entrance were told to remain indoors as a fire north of the Colquhoun Forest could send embers onto properties.

Those in the northern area of Lakes Entrance surrounded by bush were told fires may directly impact properties.

Joe Rettino drove through the small town of Sarsfield this morning and said he was shocked by the damage he saw.

"Quite a few houses burnt, there was still some fire activity with trees and stuff on fire and haysheds on fire and I just don't know how to describe it," he told ABC.

Rhonda, a resident of Buchan, between Bairnsdale and Mallacoota, said the town was "basically surrounded by fire" yesterday afternoon.

"It came out of the bush into the open land around the township and it just lit up everywhere," she said.

A south-westerly wind change swept through firegrounds in Victoria's east between midnight and 4am.

The winds brought rain to central parts of the state, but it was unlikely to have reached the ground in fire-affected areas.

"The fires through Gippsland are very widespread ... and the wind change only works to exacerbate that. So the fire danger is very high and fire behaviour can still be very unpredictable," Bureau of Meteorology (BOM) senior forecaster Keris Arndt said. 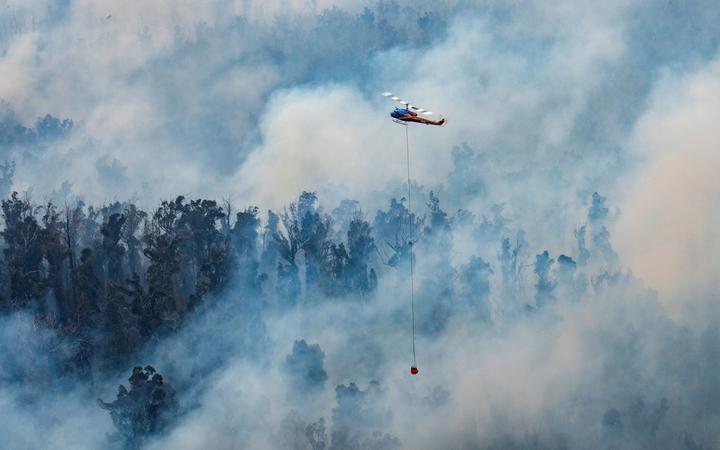 Residents from across East Gippsland spent the night at a relief centre in Bairnsdale.

Marian Random left her home at Metung with her family, three dogs and bird.

"I have been through the Second World War just outside of London. One thing I have never experienced is a bushfire," she said.

She turned 84 years old today and was unsure if she would be able to return home for her birthday.

He said there was smoke surrounding his home. He said he did not drive and had no other way out.

Terry Larkin was trying to get back to his house at Lakes Entrance yesterday but had to spend the night on a mattress at the Bairnsdale relief centre.

"It is stressful, more stressful for my son who told me to stay in Melbourne overnight," he said.

"But I am a bit pig-headed and wanted to try and get through."