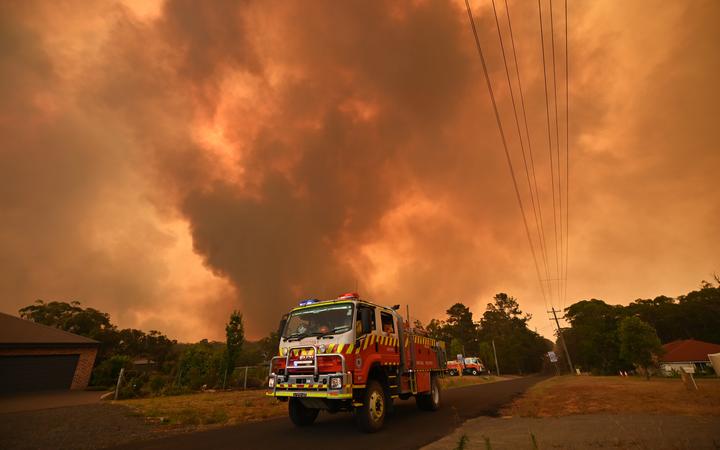 In Victoria, significant fires continued to burn in East Gippsland as the state braced for a day of extreme fire weather, with temperatures forecast to reach at least 40C.

In NSW, weary authorities and residents braced for another day of bushfire destruction, with strong winds and soaring temperatures set to fan flames towards major population centres.

South Australia meanwhile was expected to face another testing day of weather extremes with temperatures in the mid-40s in many parts, coupled with winds up to 55km/h later today.

There is a total fire ban in place for the entire state and thousands of holidaymakers were told to evacuate East Gippsland on Sunday after authorities said fires could close the Princes Highway and trap anyone left in the area.

Fires have already shut the Great Alpine and Bonang roads and motorists were told to avoid the Princes Highway between Cann River and Genoa, near the border of New South Wales.

The fire danger today is rated as extreme in the Mallee, Wimmera, south-west, central, north-central and Northern Country districts, and severe for East Gippsland and the north-east.

"This is a high-risk day for Victoria," the state's Emergency Management Commissioner Andrew Crisp said.

Bureau of Meteorology (BOM) senior forecaster Kevin Parkyn said today was "likely to be a significant fire weather day in Victoria's history", with temperatures above 40C across much of the state.

An emergency-level bushfire at Wingan River, in the state's far east, started on Sunday and increased rapidly in size overnight.

Authorities said it would likely be pushed along the coast by a sea breeze this morning.

Residents and holiday-makers in Furnell, Tamboon, Tamboon South and Wingan River were told it was too late to leave.

"Which means lightning strikes, variable winds, so that's going to be a very challenging fire for our firefighters today, on top of the existing fires that we had in East Gippsland."

Bushfires that have been burning near Ensay and Tambo Crossing since late November have joined at the southern end and are burning out of control.

East Gippsland mayor John White, a long-term resident and farmer, said he had never seen the region so dry.

"We've never ever had all of our surface water disappear as it has," he said.

"Three-and-a-half years of getting drier and drier and the landscape is totally parched. And that's why we're in such a crisis at the moment."

Total fire bans were declared in 10 areas today, including the Illawarra, Hunter and Greater Sydney, but conditions tomorrow were expected to be even worse.

The temperature at Penrith, in Sydney's west, was forecast to reach 40C today and 44C tomorrow.

The NSW Rural Fire Service (RFS) is particularly concerned about the massive "mega-blazes" at Gospers Mountain and Green Wattle Creek, which have encircled Sydney.

The BOM said a front moving through south-eastern Australia is behind the difficult conditions.

There is a risk of dry lightning, as well as strong, gusty winds as a mass of hot air settles over the state.

"That hot air is coming out of the centre of Australia, it's particularly dry and then unfortunately conditions are expected to worsen in New South Wales as we head into Tuesday," RFS Commissioner Shane Fitzsimmons said.

Yesterday, the RFS continued large backburning operations around Sydney and warned residents in several areas to be prepared as conditions deteriorated.

Tom Grant and his wife Rachel built their home near Hill Top, about 115km south-west of Sydney's CBD and 75km from Wollongong, two months ago.

They're not taking any chances and evacuated at the weekend after crews warned the Green Wattle Creek blaze was expected to reach the town this week.

"We have a three-week-old baby and a one-year-old so our priority was to get them out," Mr Grant said.

"Luckily, our house is so new it's got the highest safety rating possible."

Almost 900 homes have been razed, and 3.48 million hectares of land has been burnt in NSW so far this fire season.

A severe thunderstorm warning earlier issued for parts of the state was cancelled, however the BOM forecast damaging wind gusts above 90km/h in Maitland, Kingscote, Victor Harbor, Ardrossan and Warooka.

It said a wind gust of 100kph was observed at Port Lincoln about 3.30am.

Temperatures in the mid-40s are expected in most of the north of the state today while Adelaide is tipped to reach 40C.

The BOM warned today's extreme weather was expected to be similar to the catastrophic conditions that started fires in the Adelaide Hills, Kangaroo Island and the south-east over the past fortnight.

"It is a high-end, fire-weather day and does have many similarities to the conditions we saw back on Friday the 20th of December."

Fisher said a cool afternoon change would bring some much-needed relief from the heat, but it may also bring dry lightning strikes.