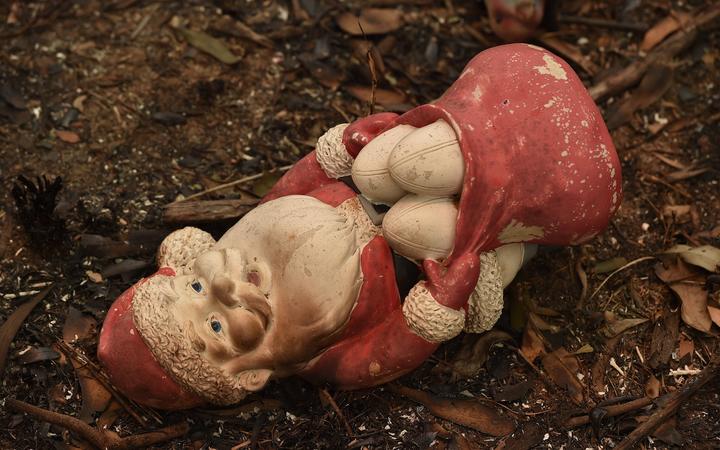 A scorched santa toy is seen on property razed by bushfires in Bargo, southwest of Sydney. Photo: AFP

Across NSW, it's a bleak festive season for thousands of people, yet the spirit of Christmas shines through in acts of kindness and the dedication of volunteers.

Chris and Megan Kezik and their three children were homeless until a stranger donated a five-bedroom house as emergency accommodation.

Their Bilpin home was razed by the "mega blaze" on Saturday, together with the Tutti Frutti cafe run by Megan's parents next door.

"[It was] very much a family venture when we started - our daughters, our son all involved in it. It's built up over that time to be a bit of an icon," Demmocks said.

Their house further down the road escaped the firestorm, but they are thankful their grandchildren now have a home.

Groat heard about the generous donation through the NSW Rural Fire Service (RFS) on Christmas Eve.

"Someone just offered a five-bedroom house for our grandkids to stay in rent-free for as long as they like. It is remarkable, I am speechless," he said.

"I can't believe the generosity of the people in Bilpin."

It's been an incredibly busy fire season. There are still fires across the state, & more work to do. We hope our hard working members can spend time with their loved ones today. Wishing everyone a Merry Christmas. #nswrfs #nswfires by Adam Stevenson at Wallabi Point 12.11.19 pic.twitter.com/1pzMmzXfyn

Across the state, scores of families left homeless by the fires are staying with friends, relatives or in emergency accommodation.

The RFS said nearly 1000 homes were destroyed this fire season, with 873 confirmed losses, plus around 100 more houses razed across the weekend.

In the state's north, some residents have been in temporary housing for weeks after fires tore through communities in the north coast, in New England and the Northern Slopes.

Warren Smith lost his home at Nana Glen on 12 November, and he's been living with his sister ever since.

He said the best Christmas present was having the rubble of his former home removed so he could begin rebuilding.

"It's moving ahead, and that's want I want to do," Smith said.

He paid tribute to the endless efforts of local RFS volunteers.

"The guys and the girls up here have been working flat out. I just wish they could spend their Christmases home with their families too. I know a lot of them won't."

Those RFS teams have been engaged in long-term "campaign firefighting" across NSW since August. 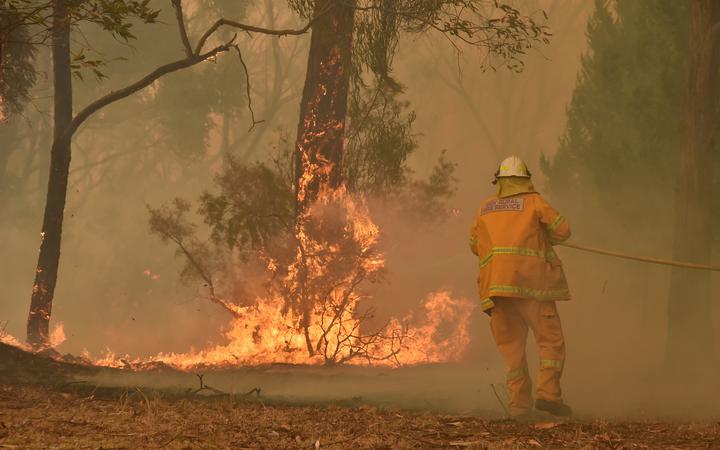 A fireman fights a bushfire to protect a property in Balmoral, 150 km southwest of Sydney. Photo: PETER PARKS / AFP

Around 2000 firefighters will be on the job today, giving up Christmas to work on containment lines ahead of soaring temperatures this weekend.

At least three RFS volunteers have seen their own homes destroyed while out protecting their communities, and two died after a fire truck was hit by a falling tree last week.

The massive fire fronts, lack of rain and the inability to extinguish the blazes have stretched resources, with fatigued volunteers rotating through stints against the never-ending infernos.

Hundreds of volunteers from across Australia and New Zealand have joined them, together with fire-management and aviation experts from the US and Canada.

US aviation specialist Michelle Moore was spending Christmas away from her 11-year-old daughter Nevada and 13-year-old son Track.

"We're really glad to be here to help. We're grateful to help."

Moore said she was going to have to let her kids down gently when she returned home.

"They were really interested in me bringing home a koala ... so that's not happening." 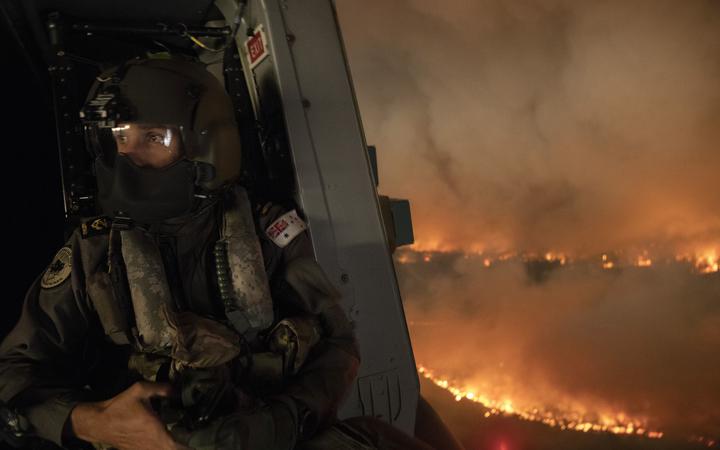 In NSW communities, children and families in need were receiving donations of toys, food and other festive items.

Demmocks said she was overwhelmed by the support given to her grandkids.

"Initially, we were asking for clothes and it just grew and grew … we can't fit it all in our car," she said.

"At least half of it is from people who don't know us. It is amazing."

But the fires burning around them kept bringing her back to reality.

"You just feel like you are living day by day," Demmocks said.