The number of homes destroyed in an Australian bushfire in the Adelaide Hills has shot up to 72. 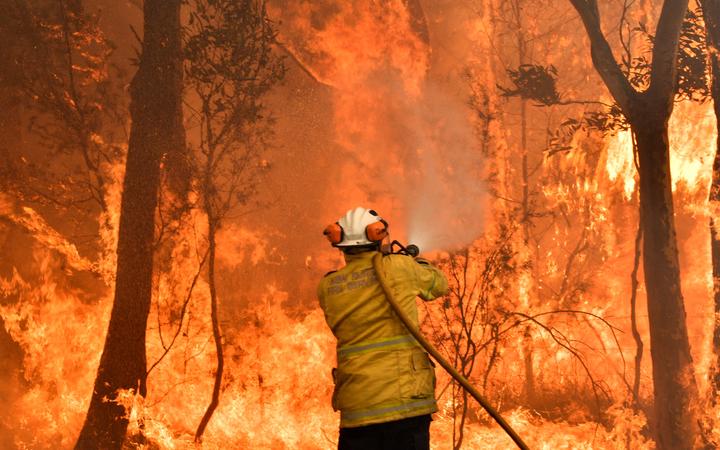 South Australian Premier Steven Marshall has also confirmed that 404 "outbuildings" on properties and 227 vehicles have been destroyed.

The previous estimate for homes destroyed by the Cudlee Creek fire was 15.

One house has been destroyed by fires on Kangaroo Island.

One man was found dead in his Charleston home on Saturday and several dozen people remain injured, but there have been no further injuries or loss of life.

The fires broke out during catastrophic conditions on Friday and remain uncontrolled.

Mr Marshall said it was a "very sad day" with "scenes of absolute devastation" as families returned to their homes to find only rubble.

It was still categorised as "going" but had "no forward rate of spread".

The Lobethal home Tina Zadow shares with her mother, Christel Willner, was destroyed in the blaze.

Ms Zadow said she had spent the whole day trying not to burst into tears.

She escaped to Adelaide with her dog and some paperwork.

"The family photos, the hundreds of my dad's slides that I was going to put into digital format and give to my brothers, and the photos from Germany from both sides of my parents that they rescued from the war - they're all gone."

Her son Josh stayed to fight the fire, sleeping on the driveway because it was the only thing not burning on the property.

"It doesn't look like a house anymore," she said.

"The walls have popped off. The floor's not there. It looks like a ramshackle old place when it was a beautiful home."

A statewide smoke advice has also been issued after a number of reports of people experiencing a strong smell of smoke across South Australia.

The CFS said light winds overnight had caused the smoke from existing bushfires to spread across the state, impacting communities some distance from the firegrounds.

The Environment Protection Authority has rated the air quality in northern Adelaide as poor and western Adelaide and the CBD as fair.

He said it was too early to tell how significant livestock losses would be in the Adelaide Hills and on Kangaroo Island.

"Some areas have been more impacted that others," he said.

Tilbrook Estate Wines was destroyed in the fire.

The few surviving individual bottles and cases that survived were auctioned off to help the owners, the Tilbrook family recover, raising $12,000.

Co-owner Annabelle Tilbrook's colleagues at Novita stunned the crowd with a bid of $5,000 for one case before immediately donating it back for an upcoming online auction.

Golding Wines in Lobethal said in a Facebook post that while some of its structures had survived, its vineyard had sustained a lot of damage.

"Other areas of our property, including our secluded patch of bushland where we located our Nido Experience, have been burnt almost beyond recognition," the post read.