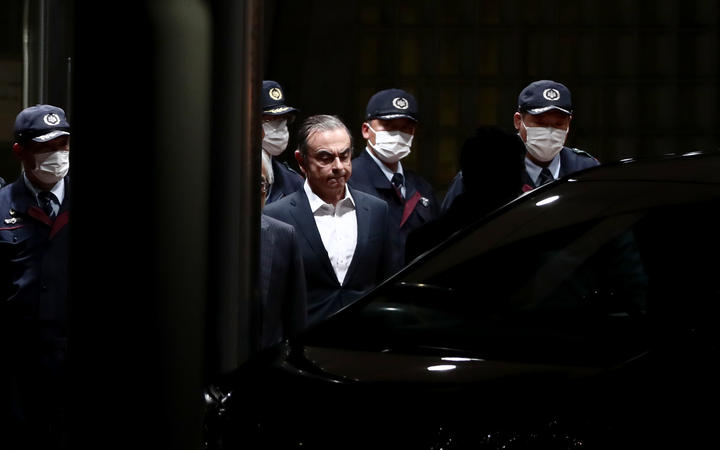 Carlos Ghosn is escorted from the Tokyo detention house after his release. Photo: AFP

One Lebanese official reportedly told AFP news agency that Mr Ghosn "reached Beirut, but it's unclear how he left Japan".

Mr Ghosn was arrested over allegations of financial misconduct in 2018 and faces several charges.

He was awaiting trial in Japan and under strict bail restrictions. He denies any wrongdoing.

Whether Mr Ghosn has struck a deal with prosecutors or fled is unknown. The businessman holds French and Lebanese passports.

French newspaper Les Echos reports that he allegedly arrived in a private jet which flew to Lebanon from Turkey - although this is unconfirmed. And the Wall Street Journal quotes a source who says Mr Ghosn fled Tokyo, amid reports he did not think he could get a fair trial in the country.

His lawyers have accused the Japanese government of conspiring against him, calling the prosecution's case "politically motivated".

Once considered a hero in Japan for turning around Nissan - and becoming the subject of a comic book there - Mr Ghosn spent 108 days in custody after his arrest in Tokyo in November 2018.

While he has since been released, he was under strict bail conditions and could not leave Japan.

He faces four charges - including an allegation by Nissan that he diverted money for his own gain. Nissan sacked him three days after his arrest.