A code red fire danger has been declared in Victoria for the first time in almost a decade, while crews in South Australia yesterday battled more than 45 fires. 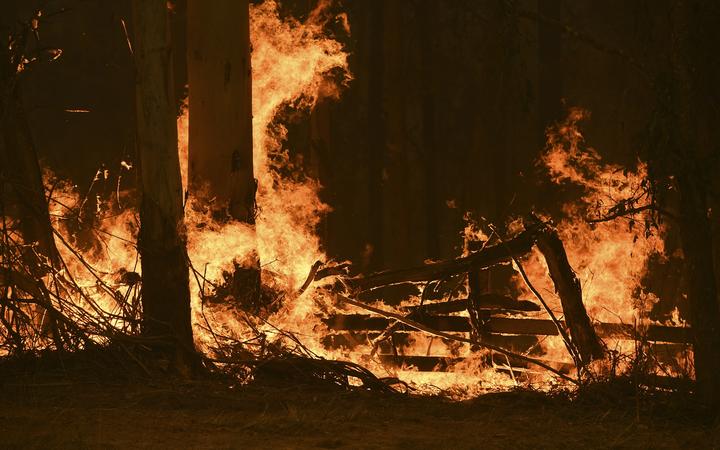 Six lives have been lost since the start of the fire season in Australia. Photo: AFP

Six people have died since last month in massive bushfires burning in New South Wales and Queensland. More than 500 houses have been destroyed.

On Tuesday much of Sydney was blanketed by smoke haze from the bushfires pushing air quality beyond "hazardous" levels in the city's north-west, the northern tablelands and the north-west slopes.

Authorities warned today that air quality in parts of the city had reached "hazardous" levels for the second time this week, as bushfires continue to ravage New South Wales.

The city has been shrouded in thick smoke with landmarks like the Harbour Bridge, Opera House and Sydney Tower barely visible.

Children, the elderly and those with heart and lung conditions were warned to stay inside.

The smoky haze is the result of about 50 bushfires burning in the state's north, and is expected to remain until this evening.

The bushfire threat has spread to Victoria, where emergency services are warning people in parts of the state's north to consider evacuating their homes.

The 'code red' alert has been declared for the Mallee and Northern Country regions. It is the highest possible rating on the state's fire danger scale, and is the equivalent to the 'catastrophic' fire rating in other states. The last time a Code Red Day was declared in Victoria was over two days in January 2010.

Country Fire Authority (CFA) chief officer Steve Warrington warned people in the named districts, which include the cities of Swan Hill, Bendigo and Shepparton, to prepare for the worst. People on rural properties with high fire risks should travel to safer areas, such as regional city centres, he said.

"What are you going to do if there is a fire," Mr Warrington said.

Almost 50 schools in north-west Victoria are closing for the day, with dozens of early childhood services and preschools to also remain shut.

Most parts of Victoria reached the mid-to-high 30s on Wednesday, and today Melbourne is forecast to reach 39C. But the Bureau of Meteorology said the heat would be shortlived and there would be a dramatic temperature drop of 15 to 20 degrees in an hour.

Country Fire Service (CFS) battled more than 45 fires across South Australia on Wednesday in catastrophic conditions and record November heat, with reports of at least one home lost on the lower Yorke Peninsula.

A team was on the way to Yorke Peninsula to assess losses from the Yorketown fire which, according to an incident controller, has blackened about 4000 hectares.

A fire at Stansbury Road in Yorketown was burning out of control and posed a threat to people directly in its path.

Strong winds also led to catastrophic conditions being declared in several regions including the Mid North, Kangaroo Island and the Mount Lofty Ranges.

An emergency warning has been issued for a fire burning out of control towards Edithburgh, on the Lower Eyre Peninsula, but the CFS said conditions were continually changing.

More than 6000 properties across the state remain without power - including almost 600 customers on the Yorke Peninsula.

The fire warning has been upgraded to severe around Australia's capital Canberra.

Air tankers have been positioned in Canberra with winds of up to 65km expected.