Nearly 500 homes have been lost in New South Wales in this bushfire season to date, the Rural Fire Service has confirmed. 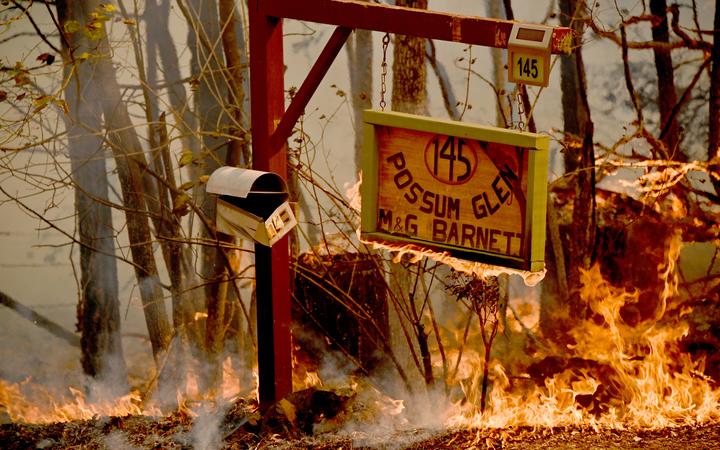 A bushfire burns outside a property near Taree, 350km north of Sydney on 12 November. Photo: AFP

The burnt area statewide now covers more than 1,650,000 hectares - more than during the past three bushfire seasons combined.

NSW RFS Deputy Commissioner Rob Rogers said 476 homes had been destroyed, with firefighters on Sunday tackling 56 fires, 27 of which were uncontained.

And in the previous most severe bushfire season, which was 2013-14, 248 homes were lost over the entirety of the period - about half of the current tally.

Of this season's total so far, 367 homes have been destroyed since the latest blast of harsh weather began on 8 November.

The update came as NSW Treasurer Dominic Perrottet and Minister for Police and Emergency Services David Elliott announced new funding for residents and local councils affected by the bushfires in the fire-hit region of Kempsey.

A $220,000 package will go to BlazeAid, the volunteer organisation that helps rural families rebuild buildings and fences.

The NSW government said $100,000 of that would be used to directly purchase fencing materials and tools, and $120,000 would go to local councils to help BlazeAid with its work.

The state government said it had already allocated $160,000 to affected local councils, supporting a clean-up operation for more than 200 landholders. 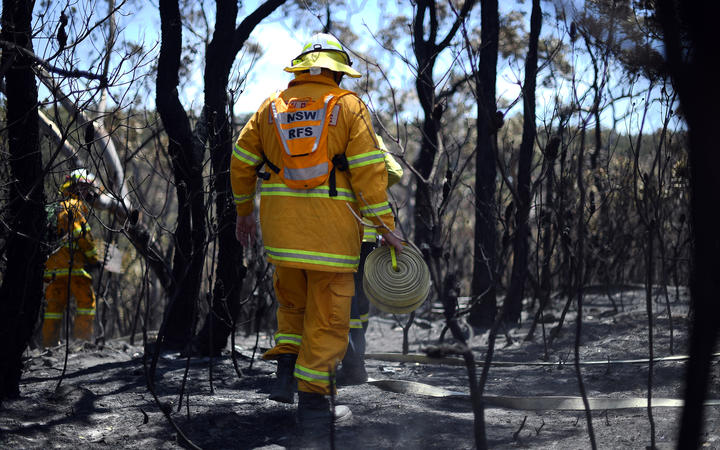 BlazeAid has base camps set up in Casino, Tenterfield, Ewingar and Ebor.

It said more than 2600 buildings in the area directly hit by fires had been saved.

On Sunday evening, the Gospers Mountain fire north-west of Sydney was the only fire still listed as watch and act.

Fire crews were using the milder conditions on Sunday to strengthen containment lines ahead of a return of hot, dangerous conditions on Tuesday.

Temperatures are expected to climb up into the 40s in some areas but Commissioner Shane Fitzsimmons warned people firefighters may not be available in some areas.

"There is no guarantee that a resource will be at every place that's likely to come under threat from these fires," Commissioner Fitzsimmons said. 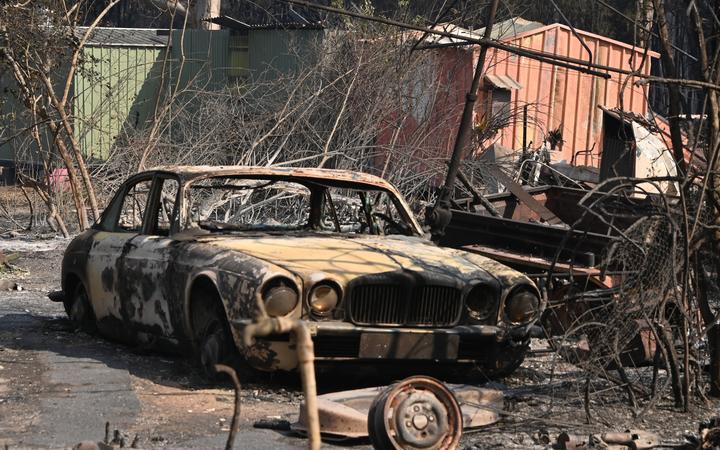 A burned car at a property destroyed by fire at Old Bar, 350km north of Sydney. Photo: AFP

The Gospers Mountain fire, north-west of Sydney, has now burnt through about 120,000 hectares of the Wollemi National Park.

One home was destroyed by the fire at Colo Heights, north of Richmond.

Deputy Commissioner Rogers said the fire would continue spreading further to the east once the westerly winds returned.

"It's fair to say that there's going to be a long time spent dealing with these fires and it's not going to be over quickly," he said.

He reiterated warnings about smoke pollution in areas including Taree, Port Macquarie and Kempsey, and said people with respiratory conditions needed to stay out of the smoke.

Looking ahead, he said crews from interstate and New Zealand were bolstering efforts to relieve exhausted volunteers, and that five large air tankers would be in service for the summer.

Twenty-five firefighters from New Zealand would be deployed to the Mid North Coast at Wauchope on Monday morning.

He said even with firefighters on the ground, people needed to continue to do their part.

"Last week, when we had that really bad batch of weather, the community stepped up. We had fires reported to us really quickly [and] people moved out of areas of high risk," he said.

"We need people to carry out that sort of activities all throughout summer."