About 600 schools will be closed across New South Wales as 'catastrophic' fire conditions threaten highly-populated areas around Sydney, Wollongong and Newcastle. The NSW Rural Fire Service warned people in catastrophic danger areas to leave if their homes were not extremely well prepared. Photo: AFP

People living in those areas have been warned there are not enough fire trucks to serve every house, and not to expect help to come if they call for it.

An unprecedented number of wildfires have burned through 850,000 hectares in New South Wales alone. Blazes are also raging in Queensland and South Australia.

Across the danger areas, the Bureau of Meteorology has forecast temperatures in the high 30s, with gusting winds up to 65 km/h in some parts.

It is the first time the Greater Sydney area has experienced such a threat since the 'catastrophic' rating was introduced in 2009.

The RFS warned firefighters will not be able to reach many people in emergency situations if a fire takes hold.

"Under these conditions, some fires may start and spread so quickly there is little time for a warning, so do not wait and see," an RFS statement said.

"There are simply not enough fire trucks for every house. If you call for help, you may not get it. 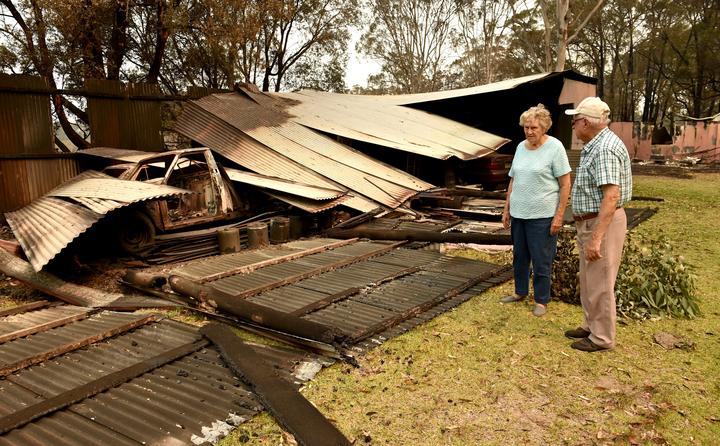 Art Murphy and his wife Shirley look at a burnt-out section of their property in Old Bar, 350km north of Sydney. Photo: AFP

RFS Deputy Commissioner Rob Rogers said the state was as prepared as it could be, with military aircraft on standby to rescue people from fires if needed.

Based on the latest forecast, we have mapped where fires on the north coast are likely to spread during tomorrow's dangerous weather. The red shows the predicted spread of fire. Check https://t.co/NXTTCbYtYQ for detailed information, advice and maps. #nswrfs #nswfires pic.twitter.com/gVstnWDrxC

Among the hundreds of schools set for closure are surburban Sydney schools, as the RFS warns that live embers could fly up to 30km from the fire front.

By comparison, on Friday, when more than 150 properties were destroyed in the state's north, embers were travelling only 12km from the front.

Bushfire behaviour expert Dr Trent Penman said the volatile wind conditions posed a clear risk for city and town properties, as they were geographically surrounded by forests and grassland.

"A single ember can start a fire in the bark mulch or straw mulch that someone has in their garden … which very quickly could move to the area around the house," he said.

"I think it is important not to be complacent and to realise that the risk is not just in the forest but in surrounding areas as well."

Transport for NSW is warning people to avoid any non-essential travel on roads and public transport.

The RFS advised residents to leave their homes if they were even a little bit unprepared, and was publishing a list of safe areas for people to take refuge from the risky fire regions.

The fire service suggested that people in risky areas, like on top of a ridge, or places with only one escape route should aim to be somewhere else in the heat of the day.