The Sydney CBD is barely visible from much of the city as a thick smoke haze from the bushfires chokes large parts of NSW, with health experts warning those with medical conditions to stay inside. 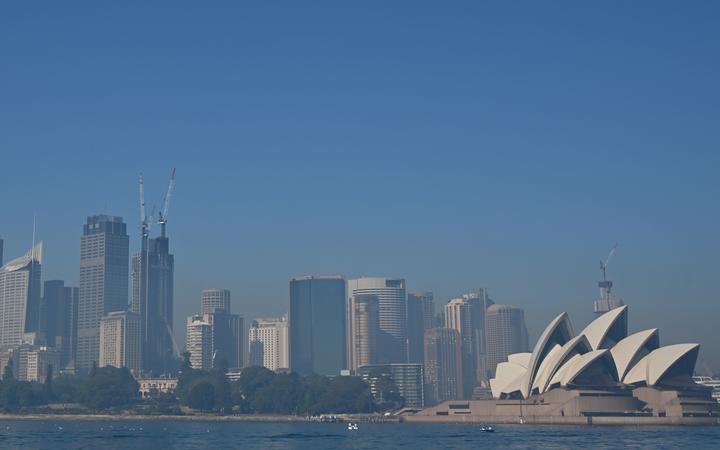 Sydney Opera House with the city skyline in the background. Photo: AFP

The Department of Environment said the smoke had pushed air quality beyond "hazardous" levels in Sydney's north-west, the northern tablelands and the north-west slopes.

The smoke is spreading from the Gospers Mountain fire, which has burnt more than 120,000 hectares north-west of Sydney and remains an out-of-control fire.

As of this morning there were 48 fires burning across the state, with 23 uncontained, and today's hot and windy conditions have the Rural Fire Service (RFS) on high alert.

"Many of the active fires may spread," an RFS spokesperson said.

There are 1,400 firefighters working to curb the spread of those fires, but RFS Commissioner Shane Fitzsimmons said there was "the potential for real challenges".

"We've got not only these high temperatures, the mid to high 30s, the dry atmosphere, but we've got this real mix of converging winds today," he said.

A northerly wind will make its way down the coast and inland, before swinging around to the south-west and strengthening, and later a blustery southerly will travel up the coast.

The RFS has also warned that fires around the northern rivers district may close the Pacific Highway later today.

The air quality is worst in western Sydney, around Richmond and Rouse Hill, where air pollution is around two to three times the national standard.

Richard Broome from the Department of Health said the risks from the smoke were minor for most people, with sore eyes and a sore throat the most common symptoms.

However, people who have pre-existing conditions like asthma or emphysema may be at slightly higher risk of developing problems.

"[For those people] it's actually better to stay indoors, keeping your windows and doors shut," he said.

But with no end in sight for the fires, which kicked off earlier than normal this year, Dr Broome advised people to adapt.

"People just need to build it into their routine a little bit for the next period of time," he said.

"We would really like to urge people to make good decisions, to make sure that when they are using motor vehicles, that they do not leave their pets, they do not leave young children, do not leave vulnerable people inside of those vehicles locked for any period of time," he said.

"We've seen tragic results from that in the past and we will see it again if people make poor decisions around that."

Many Sydneysiders struggled in this morning's smoky conditions.

"My eyes are stinging, my daughter's coughing her guts out," said one woman at Milsons Point.

Another said: "It's disgusting. I was woken up about two o'clock this morning and it was terrible."

"I'm finding it difficult to breathe and I don't have any health issues."

Personal trainer Stanley Sithole said some of his clients didn't turn out for their session this morning, heeding the advice of health authorities.

"Some people have cancelled today … they have that option, and I will go ahead with people that want to train but I will do modified training."

Client Andrew Kaldor, who's in his 70s, wasn't too bothered by the thick smoke.

"In exercising, you're always running out of breath so it doesn't matter all that much," he said.