Bolivia's ousted President Evo Morales has condemned US recognition of the country's new "de facto government" that has installed itself since his forced departure. 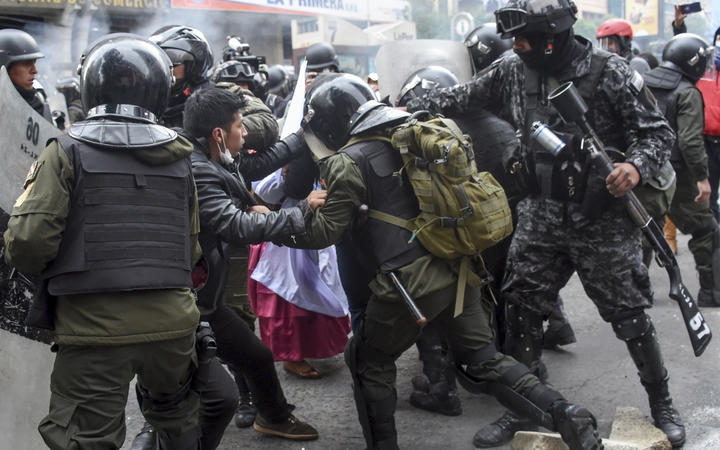 The Senate vice-president of Bolivia became interim president after Morales fled to Mexico for asylum this week.

The veteran socialist leader said his resignation was prompted by a coup, which he called in a tweet a "political and economic conspiracy" stemming from the United States.

The US acting Assistant Secretary for the State Department's Bureau of Western Hemisphere Affairs, Michael Kozak, said on Twitter the United States looked forward to working with Bolivia's interim administration.

Right-wing Senate vice-president Jeanine Anez, 52, assumed the interim role on Tuesday when Mr Morales fled to Mexico after his 14-year socialist rule ended when the military demanded he step down.

Mr Morales resigned on Sunday on the back of rising pressure over accusations of vote rigging in last month's election. But he struck a defiant tone from Mexico where he is being granted political asylum.

"If my people ask, we're ready to go back. We'll return sooner or later ... to pacify Bolivia," he said at a news conference in Mexico City.

Mrs Anez faces an immediate challenge from lawmakers of Morales' Movement for Socialism (MAS) party, who have a majority in parliament and have threatened a rival session to nullify her presidency.

She declared herself president invoking a constitutional clause that puts her next in line for succeeding the president. But Mr Morales' loyalists say that move was illegal because Congress did not accept Morales' resignation or appoint her in any legislative session as required under the constitution.

On Wednesday, television showed large numbers of police around the central Plaza Murillo in La Paz. They appeared to block MAS lawmakers, including the former head of the senate Adriana Salvatierra, from entering the government building.

Police fired tear gas as thousands of Morales supporters marched into La Paz from nearby El Alto, many carrying the colorful flags of regional indigenous groups.

Bolivia's Attorney General has said that there had been seven fatalities in the 23 days of conflict, including in the cities of La Paz, Santa Cruz and Cochabamba.

At the government palace, Mrs Anez said she planned to call elections "in the shortest possible time."

"I now call for a peaceful and democratic transition, revoking the conditions that had made us into a totalitarian country," she said.

In 48 hours of turmoil at the weekend, right-wing police climbed on station buildings and joined marches, the Washington-based Organization of American States (OAS) declared his re-election was manipulated, and the military urged him to quit.

The right-wing administrations in Brazil and Britain congratulated Mrs Anez. A US official said Washington would "look forward to working with her and Bolivia's other civilian authorities as they arrange free and fair elections as soon as possible."

Anti-Morales protesters say pressure had built to a point of no-return after increasing evidence of tampering with the October vote, and that he had gone against the will of the people by seeking a fourth term after he lost a 2016 referendum on changing the constitution to allow him to run again.

But Mr Morales promised to keep up the political fight. He attacked the OAS audit of the October 20 election.

"The OAS took a political decision, not a technical or legal one," Morales said from Mexico City. "The OAS is in the service of the North American empire."

Bolivia's largest union threatened a widespread strikes, while a coca farmers' union official and a lawmaker close to Mr Morales called for protests until he returned to finish his mandate in January.