US national security adviser John Bolton says Washington is ready to impose sanctions on any international company doing business with Venezuelan President Nicolas Maduro, a sharp escalation of US pressure on the leftist government. 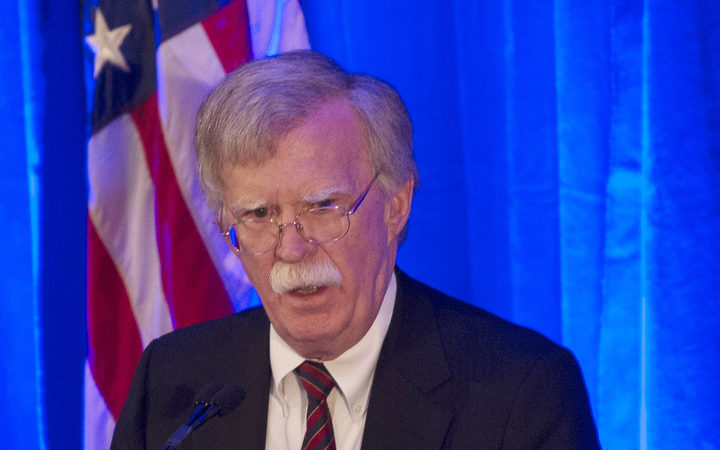 Bolton, addressing a summit on Venezuela in the Peruvian capital Lima, said today that tougher international action was needed to oust the left-wing government. More than four million Venezuelans have fled economic collapse, a situation Mr Maduro says has been caused by an "economic war" by the United States.

"We are sending a signal to third parties that want to do business with the Maduro regime: proceed with extreme caution," Bolton said.

His speech came a day after US President Donald Trump signed an executive order that freezes the assets of the Venezuelan government and bans any transactions with it, an act that could ensnare its dealings with Russia and China as well as with Western companies.

Bolton told reporters the move forced companies around the world to choose whether to risk access to the United States and its financial system for business with Maduro.

Asked by a reporter how Venezuela would respond to the executive order, Venezuelan Foreign Minister Jorge Arreaza said: "I'm going to paraphrase Donald Trump ... All options are on the table."

It was the first US asset freeze against an entire government in the Western Hemisphere in more than 30 years. But it was also a reminder that successive rounds of US sanctions had so far failed to peel away the crucial support of Venezuela's military for Maduro, who took office in 2013 following the death of his political mentor President Hugo Chavez.

US sanctions on Venezuela are similar to the kind of measures imposed on Iran, North Korea and Syria, Bolton said. "Now, Venezuela is part of this very exclusive club of rogue states," he said.

In private, Bolton had told Peruvian officials the measure would have the effect of about tripling current sanctions related to Venezuela, a Peruvian government source said, speaking on condition of anonymity.

US policymakers have privately expressed frustration that European partners have not acted more forcefully to match US sanctions on Venezuela.

The summit, organised by Peru, had aimed to build support for new elections with Maduro's allies. Yet Russia, China, Cuba, Turkey, Bolivia and Iran all boycotted the summit.

The order also could inflame the US-China trade war if it hits Beijing hard, with Venezuela owing China oil deliveries as repayment for loans through 2021, said Fernando Cutz, a former top aide to Trump on the National Security Council.

Venezuela's foreign ministry said the freeze was designed to "formalize a criminal economic, financial, and commercial blockade" of the country but said the government would continue with political dialogue with the opposition.

Bolton accused Maduro of only pretending to engage in European-backed negotiations with the opposition on the Caribbean island of Barbados to buy himself time.

Bolton warned Russia against doubling down on its support for Caracas, and urged China to recognise opposition leader Juan Guaido as the country's legitimate leader if it wanted to recoup debt owed by Caracas, since a new government in Venezuela might not want to honour agreements made with countries that helped Maduro hang onto power.

Bolton said Washington had taken steps to ensure the sanctions did not hurt Guaido and his allies, nor prevent access to humanitarian goods.

The plan calls for a long-term deal with the International Monetary Fund, Ross said.