Tens of thousands of people crossed the border with Venezuela and Colombia after it reopened for the first time in four months on Saturday, officials say. 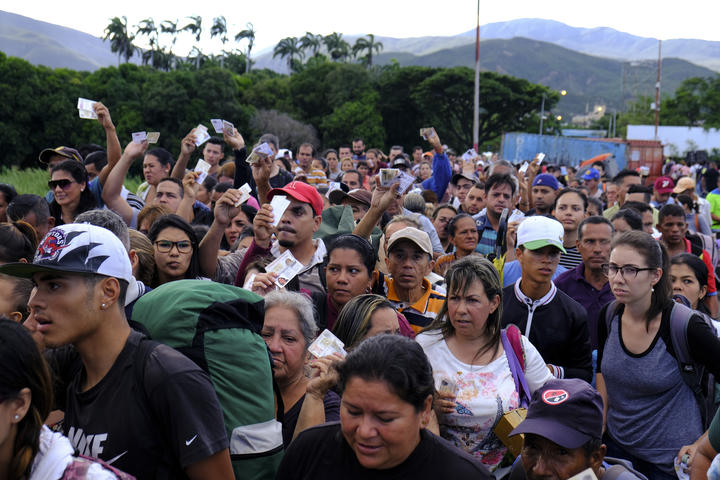 The country has faced shortages of basic supplies as a result of a severe years-long economic crisis.

According to Colombia's foreign ministry, more than 30,000 Venezuelans arrived on Saturday, with almost 37,000 leaving by the end of the day.

The borders with Colombia, Brazil and Dutch Antilles islands were all closed earlier this year after the opposition organised the delivery of foreign aid, which was denounced by Mr Maduro as part of an effort to remove him.

Last month, Mr Maduro announced the reopening of the border with Brazil and the island of Aruba, but Aruban authorities said the border would remain closed.

Announcing the reopening of the border with Colombia on Twitter, Mr Maduro - who has blamed the country's crisis on a Washington-led economic war - said (in Spanish): "We're a people of peace that strongly defends our independence and self-determination."

The closures had caused problems for towns along the border that have come to rely on Colombian cities for essential products and services, and many people have crossed illegally, at times having to pay tolls to criminals controlling passage.

Before it closed, some 30,000 people a day would cross the Simon Bolivar International Bridge every day, AFP news agency said.

The crisis in Venezuela deepened in January after Mr Guaidó, head of the National Assembly, declared himself interim president, arguing that Mr Maduro's re-election last year had been "illegitimate".

He has since been recognised by more than 50 countries, including the US and most of Latin America. But Mr Maduro retains the loyalty of most of the military and important allies such as China and Russia.

In April, Mr Guaidó led a failed attempt to spark a military rebellion against Mr Maduro, who described the effort as part of a US-orchestrated coup.

Since then, close allies of Mr Guaidó have been arrested. While his parliamentary immunity has been lifted, he has so far not been jailed.

Meanwhile, Hollywood actress Angelina Jolie, special envoy for the UN refugee agency (UNHCR), said there was an urgent need for the international community to give greater support to Colombia, Ecuador and Peru, the three countries with the most Venezuelans refugees.

After meeting with Colombia's President Ivan Duque in Cartagena, she warned that more than 20,000 Venezuelan children, born abroad to displaced families, were at risk of statelessness as their parents were struggling to obtain the necessary documents.

On Friday, the UNHCR and International Organization for Migration (IOM) said the exodus from the country meant that Venezuelans were now "one of the single largest population groups displaced from their country".