Juan Guaidó has appealed for his supporters to take to the streets of Venezuela again on Wednesday (Thursday NZT), after a day of violent clashes on Tuesday. 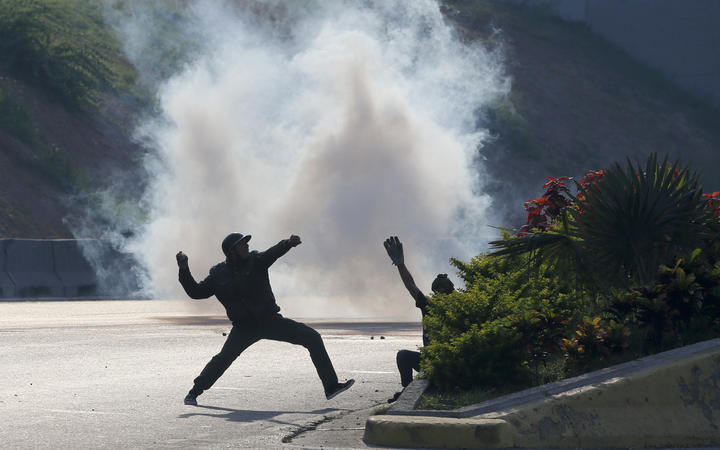 President Nicolás Maduro, whom the opposition leader is trying to unseat, remains defiant despite the protests.

In a television address he described Mr Guaidó's supporters as a "small group" whose plan had failed.

Meanwhile, the US administration alleges Mr Maduro had been ready to travel to Cuba to escape the unrest.

"They had an airplane on the tarmac. He was ready to leave this morning [Tuesday], as we understand it. Russians indicated he should stay," US Secretary of State Mike Pompeo told CNN, without offering evidence.

Senior US officials also claimed three prominent figures in Mr Maduro's government had agreed the president had to go, but later backtracked.

US National Security Advisor John Bolton said those figures allegedly included Defence Secretary Vladimir Padrino - who has since reaffirmed his support and appeared alongside Mr Maduro in his televised address.

Sitting alongside military commanders, Mr Maduro vowed he would be victorious in the face of what he called a coup attempt backed by US imperialism.

He also said events of Tuesday would "not go unpunished".

"[Prosecutors] will launch criminal prosecutions for the serious crimes that have been committed against the constitution, the rule of law and the right to peace," he said in his speech.

Meanwhile, Mr Guaidó has renewed his calls for Venezuelans to take to the streets to complete what he has said is the "final phase" of his effort to oust Mr Maduro.

A three-minute video by Mr Guaidó was published in the early hours of Tuesday.

It showed him standing alongside a number of men in military uniform, as he announced he had the support of "brave soldiers" in Caracas.

"The National Armed Forces have taken the correct decision... they are guaranteed to be on the right side of history," he said.

He urged Venezuelans to join them in the streets, and also appeared alongside another opposition leader, Leopoldo López, who had been under house arrest since 2014.

Supporters on both sides then gathered in different places in the capital, Caracas, throughout Tuesday. 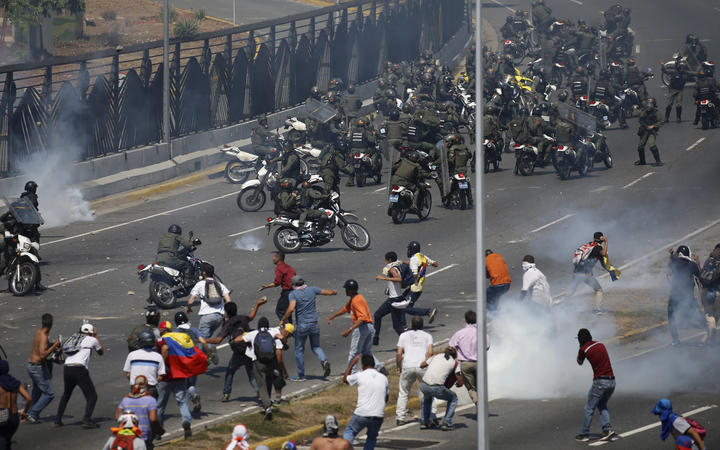 Despite Mr Guaidó's calls, it appeared most of the military stayed on the side of Mr Maduro during the clashes.

There were running clashes between Mr Guaidó's supporters and armed military vehicles throughout the day.

Protesters were also seen throwing rocks, but being repelled by tear gas and water cannon. At one stage a military vehicle was captured on video appearing to drive into protesters.

Mr Guaidó, the president of the opposition-controlled National Assembly, has been calling on Venezuela's military to back him ever since he declared himself interim president in January.

He argues that President Maduro is a "usurper" because he was re-elected in polls that had been widely disputed.

Tuesday marked the most violent episode of the Venezuelan political crisis this year. Venezuelan heath officials said 69 people were injured in the clashes, including two with bullet wounds.

Broadcasts from a number of news agencies, including the BBC and CNN, were apparently suspended amid the violence.

Later on Tuesday, it emerged Mr López had sought safety in the Chilean, then the Spanish embassy, along with his family.

Chilean Foreign Minister Roberto Ampuero said it was Mr López's "personal decision", because he and his wife Lilian Tintori are of Spanish descent.