Bolivian President Evo Morales has been declared the winner of Sunday's elections by the electoral tribunal (TSE). 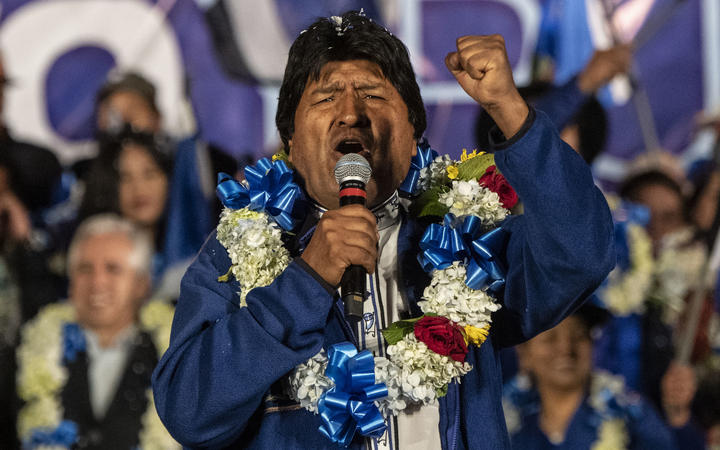 Bolivia's President and presidential candidate Evo Morales gestures during a political rally in El Alto, Bolivia, on 16 October, ahead of the 20 October presidential elections. Photo: AFP

TSE said Mr Morales had 47.1 percent of the vote with 99.9 percent of ballots counted, avoiding a second round run-off.

There were claims of the election being rigged after the vote count was paused for 24 hours.

Second placed candidate Carlos Mesa has called for a second round as has the US, Brazil, Argentina and Colombia.

Mr Mesa had 36.51 percent of the vote, according to TSE's website.

Those figures give Mr Morales a winning margin of more than 10 percentage points, meaning that a second round of voting is not required under Bolivian election law.

A spokeswoman for TSE said 0.01 percent of votes had been voided in the region of Beni with new voting there scheduled for November. She added that these votes are not enough to change the outcome of the election.

Hours after polling booths closed on Sunday, TSE released the first results of the quick count that signposted towards a second round.

However its website then stopped updating for 24 hours. When it finally resumed, Mr Morales had a lead of over 10 percentage points.

Observers from the Organization of American States (OAS) expressed concern over the count's dramatic shift.

Mr Morales has accused the observers of slandering him by expressing their concerns over the vote.

The European Union on Thursday backed the OAS assessment "that the best option would be to hold a second round to restore trust and ensure the full respect of the democratic choice of the Bolivian people".

There have been protests across the country since Monday. Following the release of the results, electoral offices in Sucre and Potosi were torched.

A general strike began on Wednesday.

Mr Mesa has urged his supporters to continue protest action and accused the electoral tribunal of manipulating the count to help Mr Morales win.

Many Bolivians say they have no more confidence in the electoral authorities.

Mr Mesa calculates that his chances of winning in a second round would be higher, especially if those candidates who did not make it to the second round throw their support behind him.

With his new win, Mr Morales, already Latin America's longest-serving president, is set to remain in power until 2025.