A young indigenous land defender has been shot dead and another wounded by illegal loggers in Brazil's Amazon. 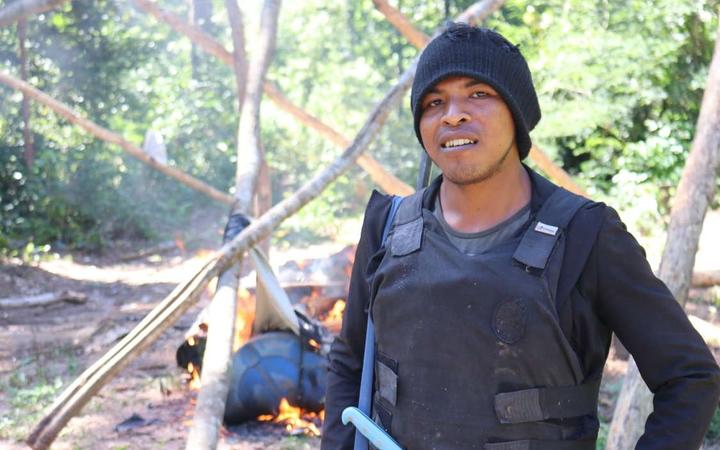 Paulo Paulino Guajajara told a journalist earlier this year he was scared about taking a stand on illegal logging but believed it was essential. Photo: Supplied / Survival International

Paulo Paulino Guajajara was reportedly attacked and shot in the head while hunting on Friday inside the Arariboia reservation in Maranhao state.

He was a member of Guardians of the Forest, a group formed to combat logging gangs in the area.

Non-profit group Survival International, which advocates for isolated communities, says at least three Guardians have previously been killed, along with many of their relatives.

In September, an official who had worked to protect indigenous people was murdered in the city of Tabatinga.

He has often stated support for farmers and loggers working in the area, while criticising environmental campaigners and slashing the budget of the Brazil's environmental agency.

Brazil's justice minister Sérgio Moro said federal police were investigating the incident. "We will spare no effort to bring those responsible for this serious crime to justice," he tweeted.

Authorities say he was shot in the head during an ambush by illegal loggers who had invaded the reservation.

Another indigenous man, Tainaky Tenetehar, was injured in the attack.

Brazilian police said one of the loggers was also killed in a subsequent shootout.

Brazil's pan-indigenous organisation APIB said Paulo Paulino Guajajara's body was still lying in the forest where he was gunned down.

The APIB, which represents many of Brazil's 900,000 indigenous people, said Mr Bolsonaro's government had serious questions to answer.

"The Bolsonaro government has indigenous blood on its hands," it said in a statement.

"The increase in violence in indigenous territories is a direct result of his hateful speeches and steps taken against our people."

The land defender, who was in his late twenties and had a son, was a Guajajara leader.

The Guajajaras are one of Brazil's largest indigenous groups with some 20,000 people. In 2012, they started the Guardians of the Forest to protect the Arariboia Indigenous Territory.

"I'm scared at times, but we have to lift up our heads and act. We are here fighting," he told Reuters news agency this year.

"There is so much destruction of nature happening, good trees with wood as hard as steel being cut down and taken away," he added.

"We have to preserve this life for our children's future."