Survivors and bereaved relatives of the Grenfell Tower fire have called for London Fire Brigade chief Dany Cotton to resign - after a highly critical report from the inquiry into the blaze. 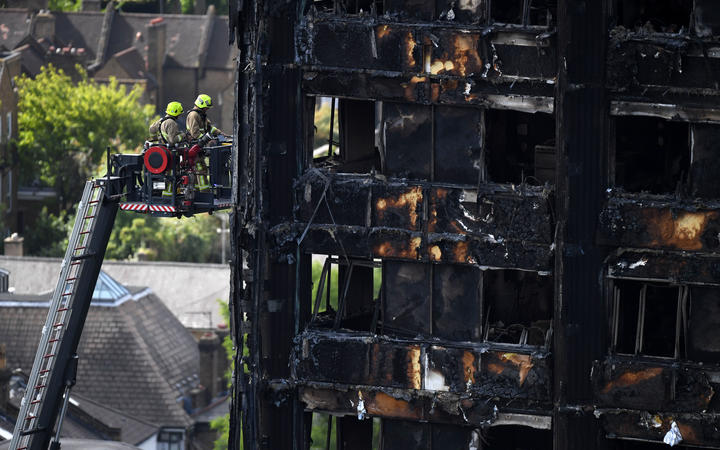 The London Fire Brigade has been condemned for "serious shortcomings" and systemic failures in its response to the Grenfell Tower fire, in a report after the first phase of an inquiry. Photo: AFP

The report said some of the 72 people who were killed could have been saved if the building was evacuated sooner.

Members of the Grenfell United group said it was "heartbreaking" to read - and want senior staff to be prosecuted.

The LFB said it was "disappointed" by some of the criticism of individuals.

The inquiry, which examined what happened on the night of 14 June 2017, concluded that "many more lives" could have been saved if the advice to residents to "stay put" had been abandoned earlier than 02:35 BST.

It said London Fire Brigade's preparations for such a fire were "gravely inadequate".

Survivors called for senior fire brigade staff to be sacked and prosecuted, saying that the brigade is "in the hands of people that are incapable of their jobs".

Nazanin Aghlani, who lost two family members in the fire, said: "If a fire happened tonight the same thing would happen again."

The brigade's commissioner Dany Cotton expressed her "deepest sorrow" that firefighters had not been able to save those who died, but said the inquiry had no expert evidence to support its conclusion about evacuating the tower.

The report also concluded that cladding surrounding the tower did not comply with building regulations and was the main reason for the fire's "shocking" spread.

"Lives are at risk and the government need to treat this as a national emergency," the group said.

The inquiry made 46 recommendations, including improvements in training for fire brigade staff and the development of national guidelines for evacuating high-rise buildings.

Grenfell United called for the recommendations to be implemented in full, saying they would save lives.

The report condemned the brigade for "serious shortcomings" and systemic failures in its response to the fire.

'Opportunity to save everyone'

Inquiry chairman Sir Martin Moore-Bick said the absence of a plan to evacuate the tower was a "major omission" by the brigade and more lives could have been saved had the "stay-put" policy been abandoned sooner.

Grenfell United responded: "It is heartbreaking to read that more of our loved ones could have been saved that night if the building was evacuated earlier."

At an emotional news conference, relatives of 20 victims of the fire called for an overhaul of the brigade, saying its leadership should resign and face prosecution.

Sid-Ali Atmani, who escaped from the 15th floor, told the BBC's Victoria Derbyshire programme: "Those in command had [the] opportunity to save everyone in that tower - we're talking about two hours."

Karim Mussilhy told the BBC he blamed the fire brigade leadership, not the firefighters. "Dany Cotton needs to step down today," he said. "She should not have the luxury to retire early with this £2m pot."

'Too little too late'

The report said evidence from Ms Cotton that she would not have changed anything about the brigade's response was "insensitive".

Ms Cotton said many of the recommendations were welcome and would be "carefully considered".

She expressed her "deepest sorrow at not being able to save all those who died in the Grenfell Tower fire".

She added: "We welcome the chairman's recognition of the courage, commitment and bravery of firefighters on the night, but we are disappointed at some of the criticism of individual staff members who were placed in completely unprecedented circumstances and faced the most unimaginable conditions while trying to save the lives of others."

However, Natasha Elcock, chairwoman of Grenfell United who was rescued with her six-year-old daughter from the 11th floor, said Dany Cotton's statement was "too little too late".

"She stood up in the inquiry, in a room full of bereaved and survivors and said there's nothing she would do to change that night," she told the BBC.

"If she'd expressed that sorrow that day in that room, that potentially would have washed with us today."

Grenfell United expressed concern at the report's finding that the LFB were "at risk of not learning the lessons from Grenfell", adding that firefighters were "let down by their training, procedures, equipment and leadership".

Other issues highlighted in the report included:

Boris Johnson told MPs that survivors and the bereaved had been "overlooked and ignored" before the fire and "shamefully failed" afterwards.

He said the government planned to name companies who were failing to replace unsafe cladding on their buildings, adding: "Too many building owners have not acted responsibly."

Labour leader Jeremy Corbyn said the government's response had been "too slow and not strong enough on every front", from rehousing the survivors to replacing Grenfell-style cladding.

The second phase of the inquiry will focus on wider circumstances of the fire, including the design of the building.

While this was not the focus of the first phase, the report found there was "compelling evidence" external walls of the building failed to comply with building regulations and "actively promoted" the spread of fire.

It said the principal reason the flames shot up the building so fiercely was the combustible aluminium composite material (ACM) cladding with polyethylene cores which acted as a "source of fuel".

Grenfell United said the second phase of the inquiry "must now focus on where responsibility for the devastating refurbishment [of the building] lies", with the Royal Borough of Kensington and Chelsea, the tenant management organisation and the companies involved facing "serious questions".