Dozens of Grenfell survivors and relatives are taking legal action in the US against three firms they blame for the fire, the BBC has been told. 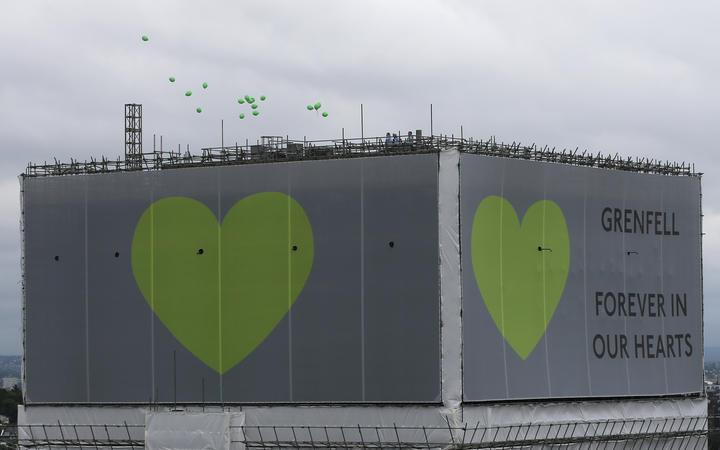 Balloons are released from the top of Grenfell Tower on the anniversary of the Grenfell fire in west London on June 14. Photo: AFP

A successful action in the US could cost the firms involved tens of millions of dollars in damages.

Two of the three firms said they would not comment on the case while official investigations into the fire continued.

Whirlpool and Arconic have both provided responses to the Victoria Derbyshire programme but Celotex has not yet commented.

The Grenfell fire in June 2017 claimed the lives of 72 people and another 70 were injured.

The first phase of the public inquiry into the disaster heard expert evidence that a small kitchen fire broke out through a uPVC window fitting and ignited material attached to the building.

The new exterior cladding and insulation was installed in 2016 as part of a £10 million ($NZ19.2m) refit of the tower.

US lawyers representing Grenfell survivors and victims' relatives are expected to file the lawsuit this week in Philadelphia under product liability law, which is meant to hold firms responsible for injuries caused by the goods they sell.

The state of Pennsylvania was reportedly chosen as the legal jurisdiction for the suit because both Arconic, which supplied the combustible ACM panels, and Celotex, which manufactured the insulation, have their US headquarters there.

The Victoria Derbyshire programme has been told a number of Grenfell residents have refused to sign up to the action, saying they believe it could become a "distraction" from the ongoing public inquiry and criminal investigation.

A claim is also being brought against another US corporation, Whirlpool, which made the fridge-freezer in flat 16, which the public inquiry was told was the likely cause of the fire.

However, other experts said there was insufficient evidence to say it was definitively to blame.

A civil case for damages has to be started within two years of the fire itself because of the statute of limitations in the US.

At least two large US law firms are involved in the action.

Lawyers believe the disaster could not have taken place in the US because of tighter fire safety rules and a ban on the use of similar cladding on high-rise residential buildings. 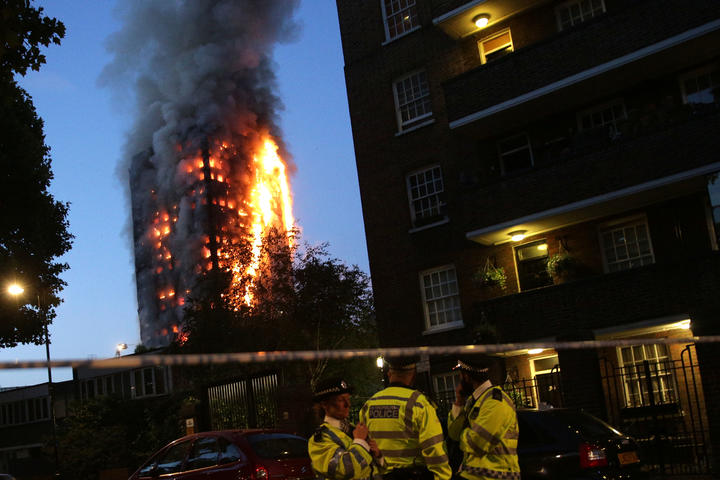 Unlike in the UK, any case would be heard by a jury and could lead to much larger financial awards for both compensation and punitive damages.

The BBC understands lawyers believe it is impossible to estimate the size of any future award but have indicated that, in 2013, a similar lawsuit related to a building collapse that killed seven people, settled for $227m (£178m).

Before any case can reach trial, it is believed to be extremely likely all three companies named in the suit will argue it should not be heard in the US because the fire happened in the UK.

One former resident of the tower, who wanted to remain anonymous, told the BBC more than 100 survivors or relatives have signed up to the US legal action.

Not every Grenfell family has decided to sign up, with some survivors thought to be uneasy about pursuing a damages claim outside the UK.

One resident told the Victoria Derbyshire programme he did not feel it was "morally right" to take action in the US; another described it as "ugly" and a "distraction" from pursuing Kensington and Chelsea Borough Council and the Tenant Management Organisation, responsible for the tower.

The cladding system installed in the tower in 2016 was made up of multiple elements. The thin, outer aluminium panel was made by US metals giant Arconic.

A spokesman said the company had no comment on any potential litigation.

"We continue to support the public inquiry and the investigations by the authorities," he said.

Earlier this year, the $US15 billion sale of Arconic to a US private equity firm broke down. A key issue was said to be the size of any possible financial liabilities linked to the disaster.

In May 2018, a BBC investigation claimed the insulation used, manufactured by Celotex, had not passed required safety tests.

The BBC's Panorama programme was told that the way Celotex tested and sold the product could amount to corporate manslaughter.

The company, owned by French material giant Saint-Gobain, said at the time it could not identify any evidence to support Panorama's allegations.

Whirlpool said two separate investigations found no evidence of any fault with the fridge-freezer model that was in flat 16, and confirmed it complied with safety requirements.

"We are committed to assisting the Grenfell Tower Inquiry in any way we can as it continues to investigate all the potential origins and causes of the fire and how it spread, a spokesman said.

"While the inquiry is ongoing, it would be inappropriate to comment further at this time," he added.

"Two separate investigations have been carried out - one by the Department for Business, Energy and Industrial Strategy (BEIS), and another by Whirlpool," he explained.

"Both investigations independently found no evidence of any fault with this model and confirmed that it fully complied with all safety requirements. These conclusions have also been verified by the government's chief scientific adviser."

He added: "We would like to reassure owners of these products that they are safe and they can continue to use them as normal."

Under US state law, the legal process is expected to take several years. Lawyers say an initial judgement on whether the case can proceed is likely within six months, with a full trial possible approximately 18 months later in a US courtroom.