A group of hardcore protesters threw petrol bombs at a police station as violence flared in Hong Kong during a banned march that drew tens of thousands. 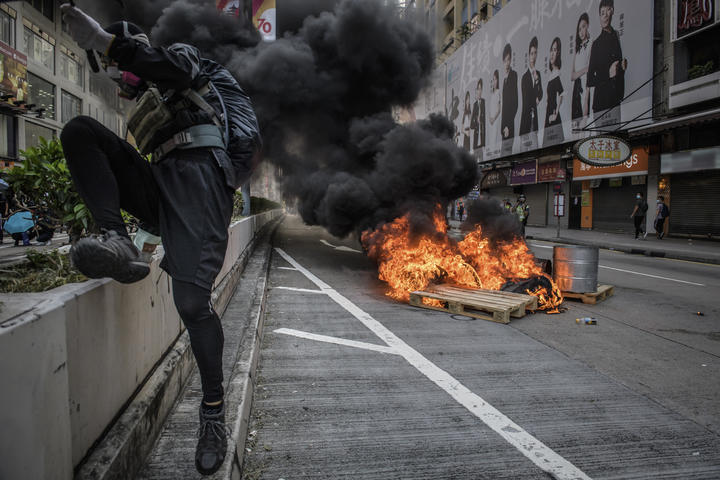 A protester jumps over a barrier after setting a fire on a road during a pro-democracy march in the Kowloon district. Photo: AFP

But large numbers defied authorities, with a small group of black-clad protesters attacking a police station.

Hong Kong has been convulsed by pro-democracy protests for four months.

The unrest in the territory, which is part of China but enjoys unique freedoms, has been the worst crisis since the British handover in 1997.

At the Tsim Sha Tsui police station, officers fired tear gas as the building's gate was set on fire. A water cannon was then deployed to clear the area, which would normally be thronged with Sunday shoppers. 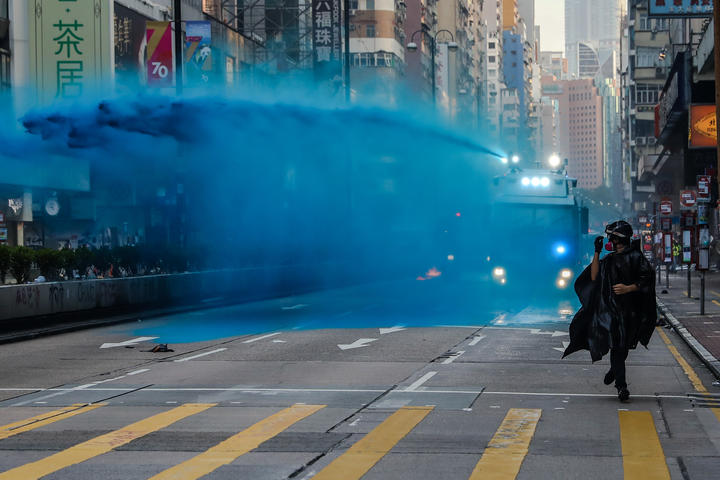 A protester runs from advancing police as they deploy a water cannon on a road in the Tsim Sha Tsui district. Photo: AFP

In one controversial incident, a water cannon truck fired powerful jets of blue liquid at protesters outside a mosque.

Police said the water cannon had "accidentally affected the entrance and front gate" of the mosque.

The Muslim Council of Hong Kong said the mosque was not targeted by police, whose officers later apologised and helped with the clean-up effort.

Elsewhere, shops and Chinese banks were vandalised. A large blaze, started by protesters, engulfed the store of a Chinese smartphone maker in Mong Kok.

Not all of Sunday's demonstrators engaged in violence. Although the rally was illegal, it began peacefully.

The anger of the crowd was partly fuelled by an attack on pro-democracy leader Jimmy Sham earlier this week which left him in hospital. He was set upon by five men with hammers in the Mong Kok district of Kowloon.

On Saturday, another man who was reportedly handing out pro-democracy flyers was stabbed.

In recent weeks, numbers attending protests have dropped from their peak. The movement has seen hundreds of thousands taking part in demonstrations on several occasions.

This Sunday's rally rivalled those numbers, according to organisers, who said around 350,000 people attended. Attendance figures from Hong Kong police are not yet available.

One protester, Daniel Yeung, said Sunday's turnout far exceeded his expectations, adding that "Hong Kongers won't easily give up their right to demonstrate".

"The government are now refusing to authorise any peaceful protest," another demonstrator named Avery said on Sunday. "That means anyone who comes out will inherently be breaking the law. So that's the tactic the Hong Kong government is using."

Is there any solution in sight?

Originally, the protests were prompted by outrage at a new law that would have allowed criminal suspects to be extradited to mainland China.

People in Hong Kong are fiercely protective of their legal system and enhanced personal rights, which are governed under an arrangement known as "one country, two systems".

But they have grown increasingly concerned that China seeks greater control.

The extradition bill was eventually scrapped but the protest movement has broadened to include four other demands:

Hong Kong's embattled leader Carrie Lam is seen by many pro-democracy campaigners as a mouthpiece for Beijing - something she fiercely denies.

Ms Lam was forced to abandon her major annual speech in parliament this week after opposition lawmakers heckled her, brandishing banners and shouting slogans.

Her speech, calling for an end to the protests, eventually had to be delivered by pre-recorded video.

US lawmakers, meanwhile, have backed the pro-democracy movement by passing a bill in the House of Representatives supporting them.

American companies, including video game firm Blizzard and the National Basketball Association, have also found themselves embroiled in the political crisis.