Dozens of spectators at a US basketball game have held signs and donned T-shirts and masks in support of protests in Hong Kong. 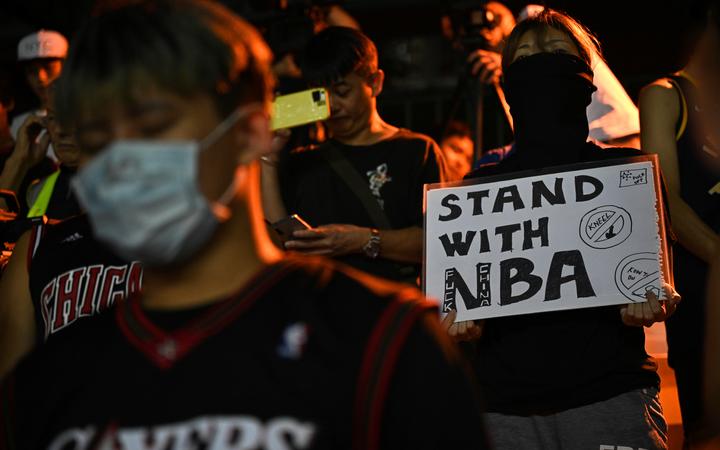 A protester holds a sign at the Southorn Playground in Hong Kong on October 15, 2019, during a rally in support of NBA basketball Rockets general manager Daryl Morey and against comments made by Lakers superstar LeBron James. Photo: AFP

Demonstrators gathered during a match in New York between the Brooklyn Nets and the Toronto Raptors.

The move was organised by film producer Andrew Duncan, who bought 300 tickets for the activists.

It comes amid an ongoing row between China and the NBA over the protests that have rocked Hong Kong since March.

Images from the pre-season game on Friday show demonstrators wearing T-shirts emblazoned with "Stand With Hong Kong" and "Free Tibet".

Two other people were also pictured wearing Winnie-the-Pooh costumes. The cartoon bear is used as a symbol to mock Chinese President Xi Jinping and is banned in China.

Footage from the protest was shared on social media.

Among the group was Hong Kong activist Nathan Law, the former chairman of Demosisto, a pro-democracy party he co-founded with fellow campaigner Joshua Wong.

"We want to use our performance art to show our support for Hong Kong and the NBA," another spectator, Chen Pokong, 55, told the New York Post. "[China wants] to take away freedom of speech and now spread dictatorship to America."

Local media report that some of demonstrators were ejected from the game for chanting. 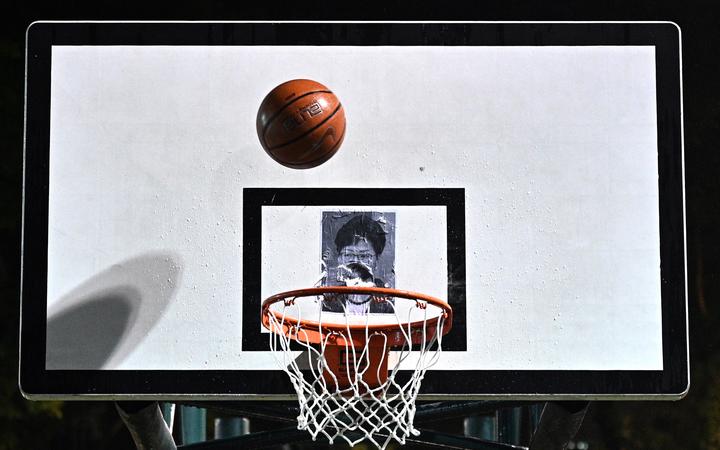 Similar demonstrations have already been held at other games between American and Chinese teams. Earlier this month, during a match between the Philadelphia 76ers and the Guangzhou Loong-Lions, two people were asked to leave for holding signs in support of Hong Kong protests.

At another game between the Loong-Lions and the Washington Wizards, local media report that spectators had their pro-Hong Kong signs confiscated.

But Friday's protest was the first to be held during a match between two American NBA teams.

The spat between the league and China's government began earlier this month after Houston Rockets manager Daryl Morey tweeted support for protests in Hong Kong.

As a result, several Chinese firms suspended sponsorship and telecast deals with the NBA - a huge financial blow to the league, which has millions of followers in China.

The Rockets and the NBA quickly distanced themselves from Mr Morey's tweet, while basketball superstar LeBron James suggested the Rockets' manager "wasn't educated on the situation" in Hong Kong.

Brooklyn Nets owner Joe Tsai - who is also the vice-chairman of Chinese ecommerce giant Alibaba - has also criticised Mr Morey for his "damaging" tweet, saying he misjudged how strongly many Chinese people felt about Hong Kong.

"Supporting a separatist movement in a Chinese territory is one of those third-rail issues, not only for the Chinese government, but also for all citizens in China," Mr Tsai added.

Mr Morey has since backtracked on his tweet but US lawmakers on both sides of the political aisle have accused the NBA of bowing to Beijing.